Published in 1932, Aldous Huxley’s Brave New World is a dystopian social science fiction novel set mainly in London during AD 2540 or AF (After Ford) 632. Living in the World State, citizens are free from pain and suffering at the expense of personal autonomy. They’ve been genetically and environmentally engineered into an intelligence-based social hierarchy with Alphas and Betas on the top, Gammas in the middle, and Deltas and Epsilons on the bottom. 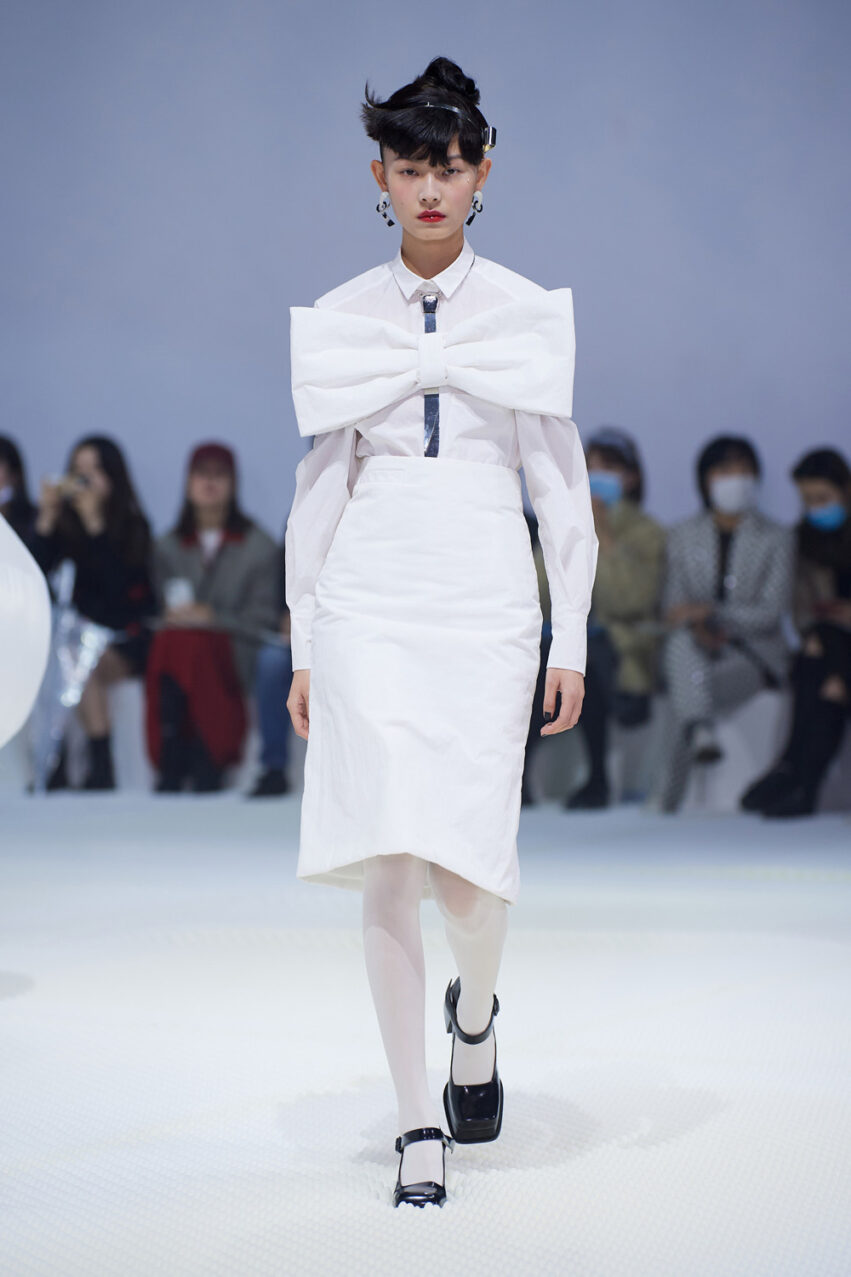 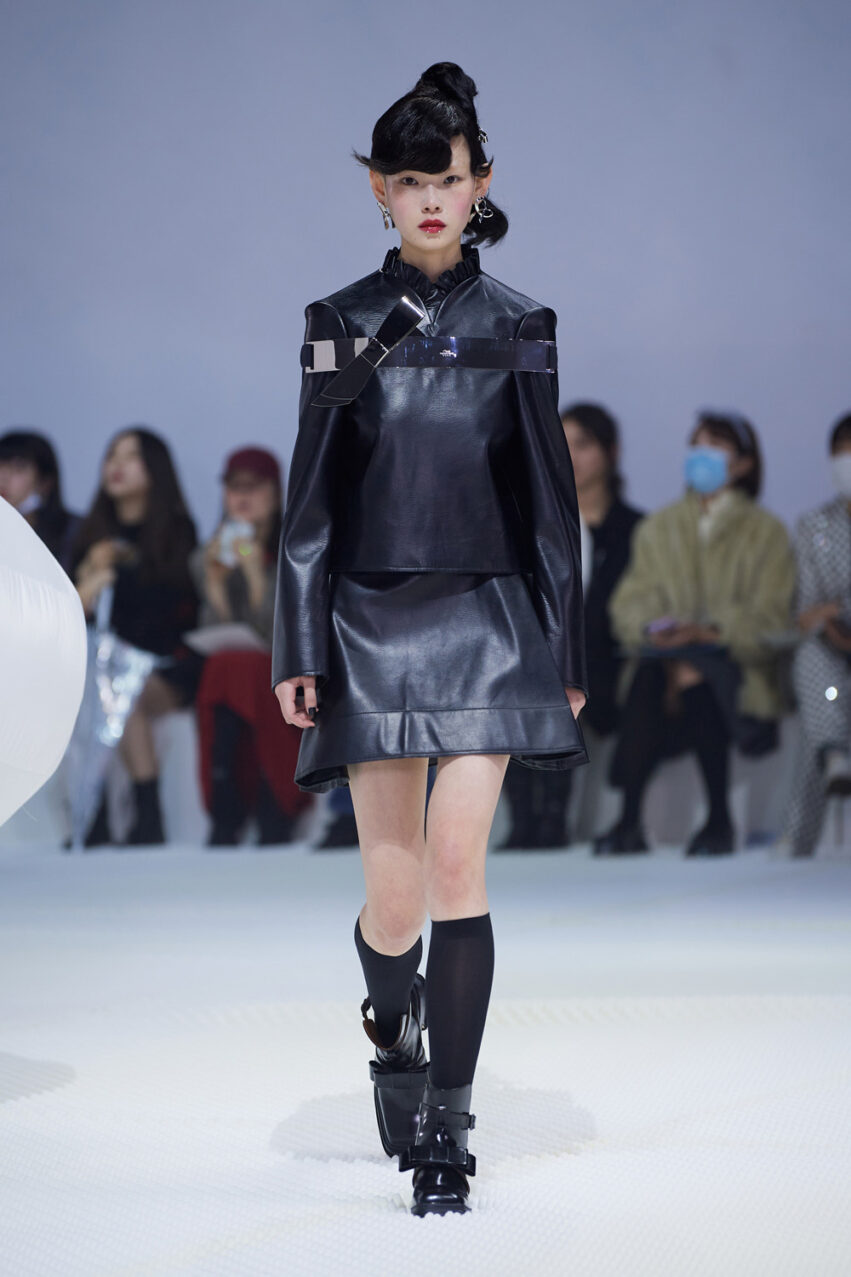 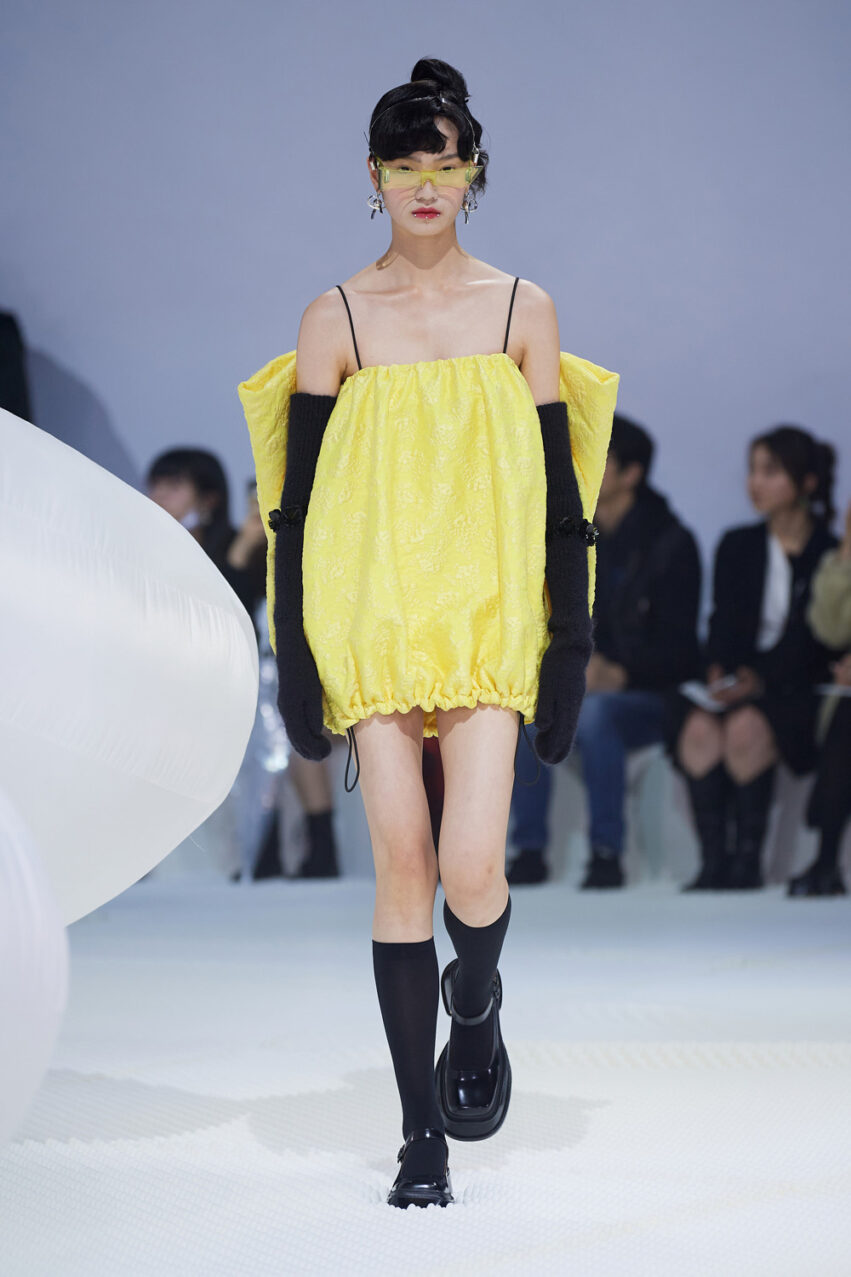 Presented by Labelhood’s emerging designer platform at Shanghai Fashion Week, FW21 marked Shushu/Tong’s return to the Brave New World. Governed by Gen Z designers Liushu Lei and Yutong Jiang, the two have formulated a feminine edge since their days working at Simone Rocha and Gareth Pugh, respectively. While Diamonds Are a Girl’s Best Friend for SS21, this season, Shushu/Tong acknowledges that “In spite of the material abundance, absurdity lingers in realms of the void.” 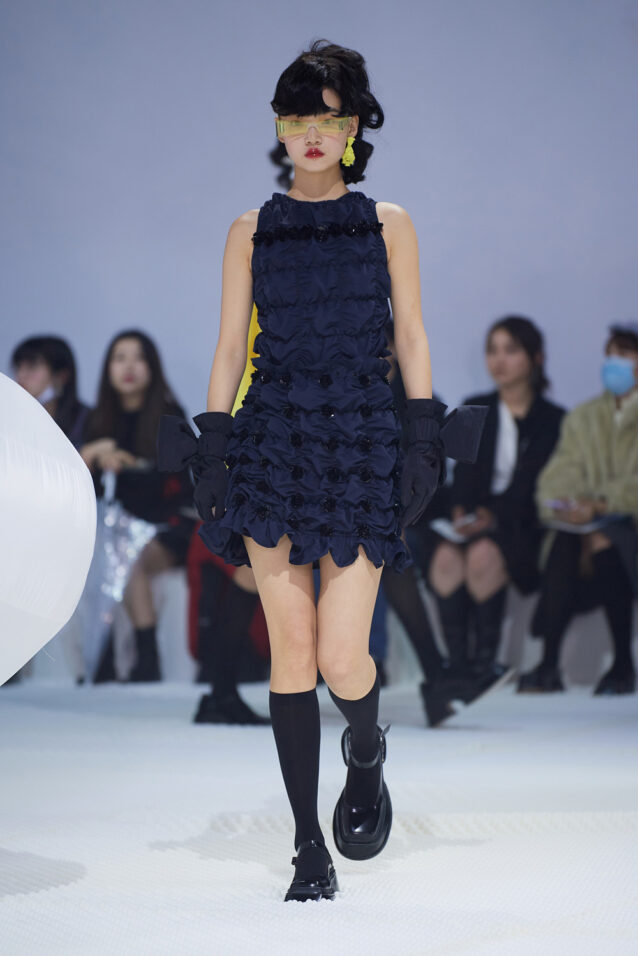 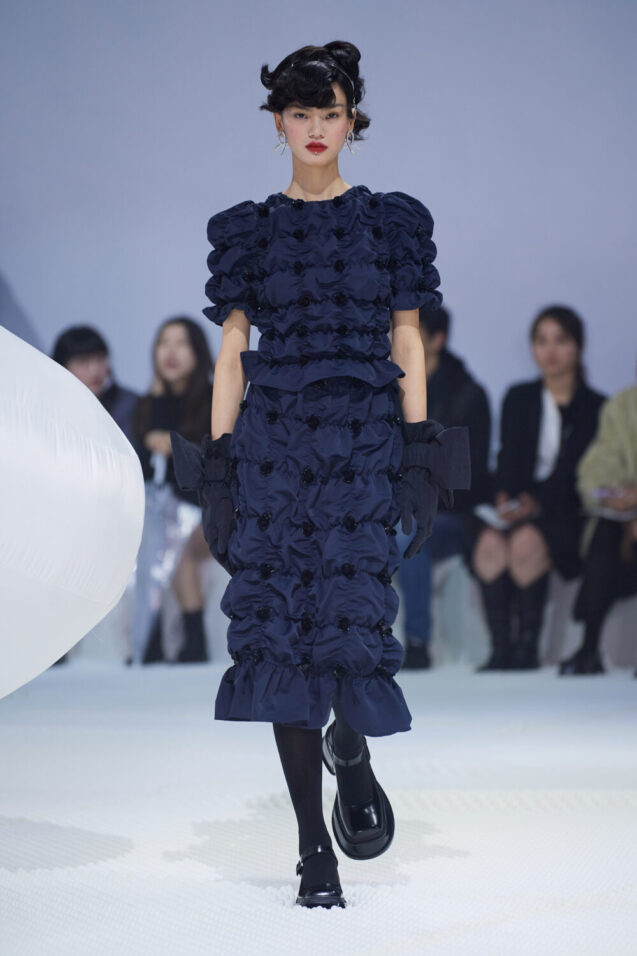 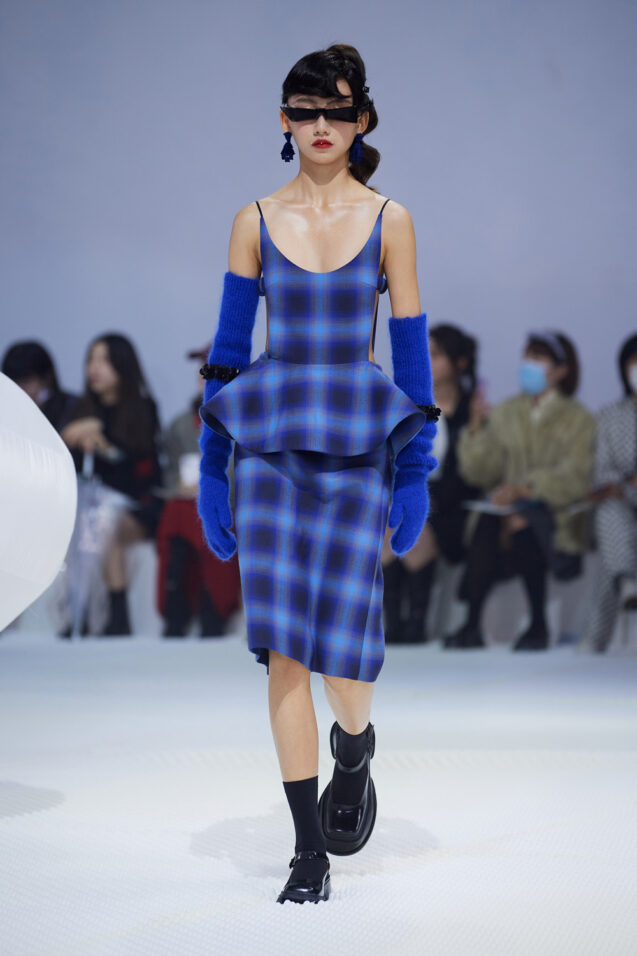 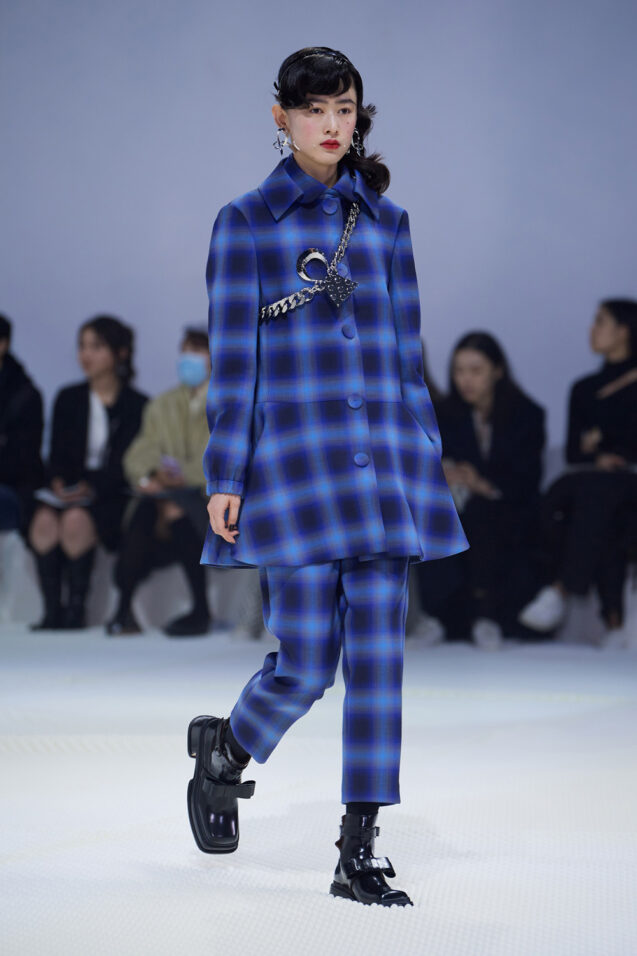 In this Huxleyan future meets 1960’s Space Age, the airbrush artistry of Shuhua Xiong has replaced the colour-coded caste system. With work that “expresses motifs both abstract and representational,” she gives shape to the forms of connection that we seek in the world — something that Bernard Marx would have truly appreciated. Among the pops of pink and yellow is a series of plaid looks in royal blue and burnt orange. From peplum pieces to knee-length skirts and matching jacket and trouser sets, the new uniforms have a piercing sensibility. 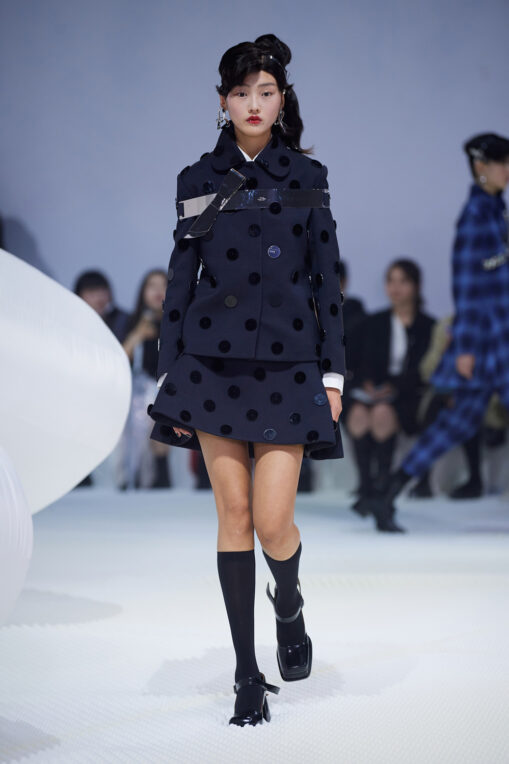 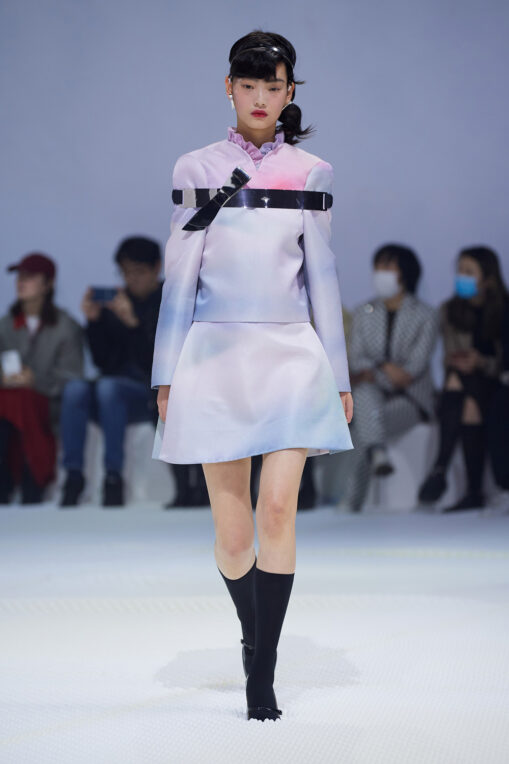 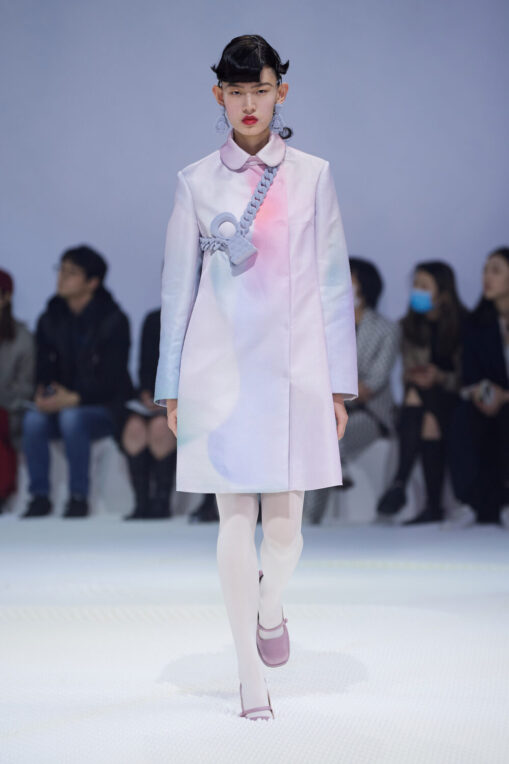 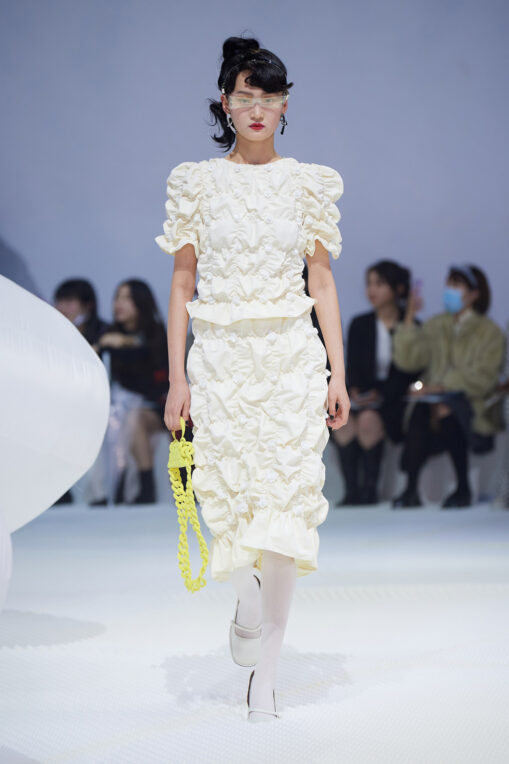 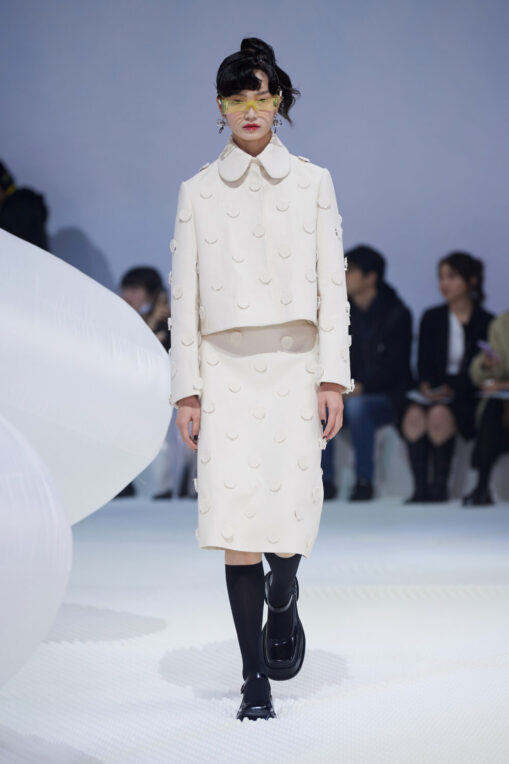 Bows, a signature of Shushu/Tong’s, are worn throughout as crop tops, bubble dress backs and detachable blouse elements. By far, their sharpest iteration comes in a metallic ribbon that constricts the arms; Is it gift wrap or a nod to the Malthusian belt? Meanwhile, sequins punctuate the ruching on waterproof fabrics before breaking out into all-over glitter dresses and eventually settling on latticework. Polkadots are another mainstay with 3D versions pressed onto black leather and a concave design on teddy fur that is sure to give you the feelies. 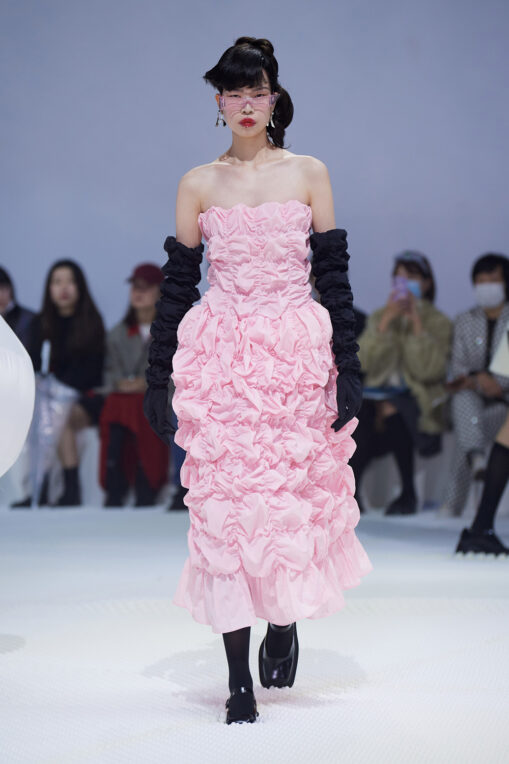 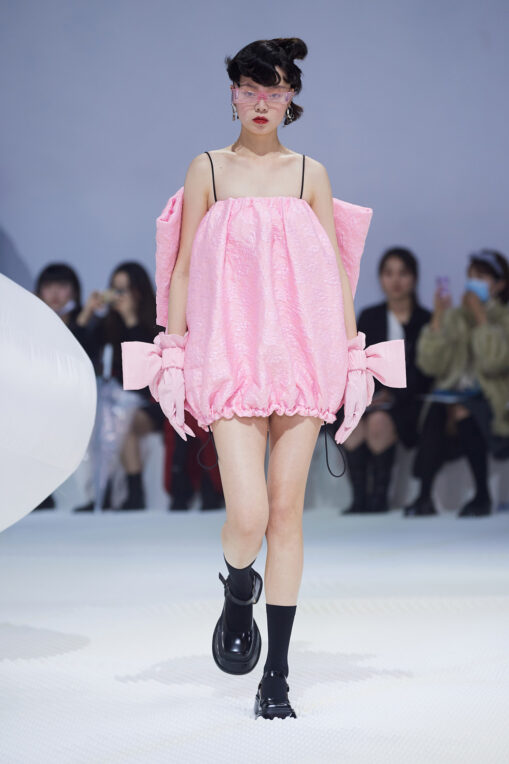 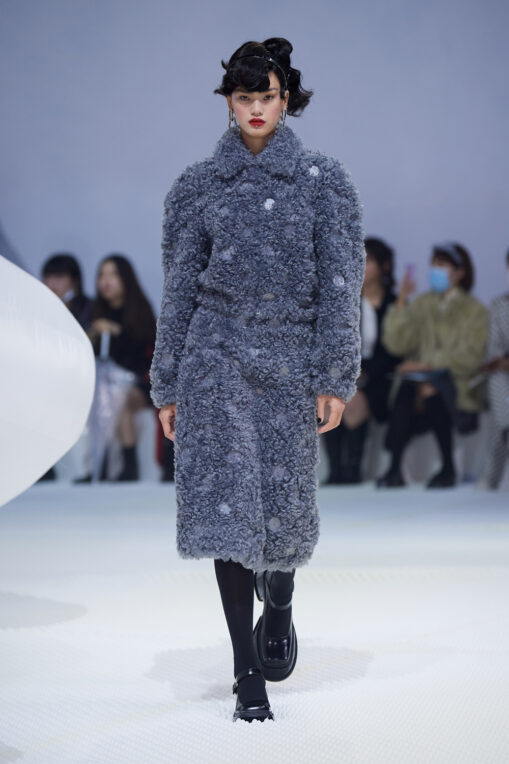 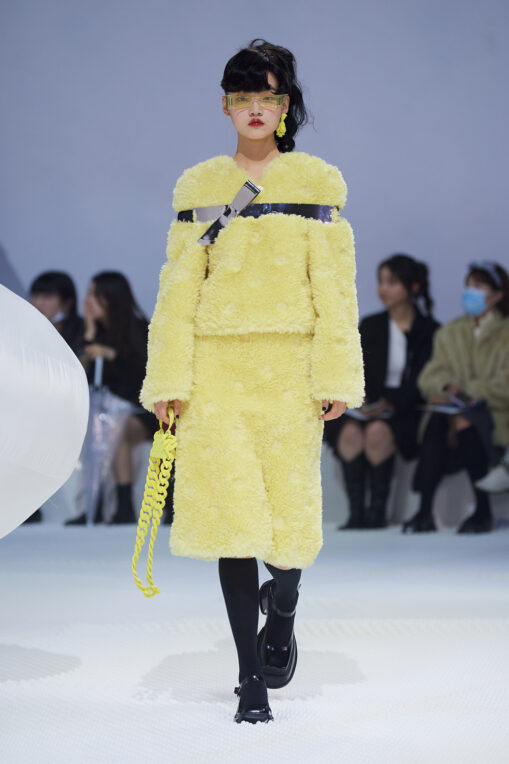 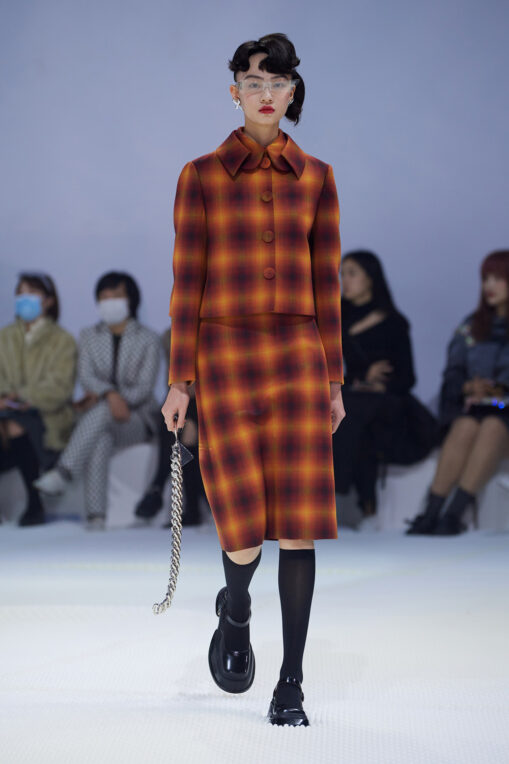 In the final act of Shakespeare’s The Tempest, Miranda exclaims, “How many goodly creatures are there here! / How beauteous mankind is! O brave new world / That has such people in’t.” Although said in earnest, the irony of these words is not lost on the audience, nor was it on Aldous Huxley, who used it as a jumping-off point for his World State. In turn, Shushu/Tong’s imagining fuses with the reality of living through a pandemic to create yet another brave new world. 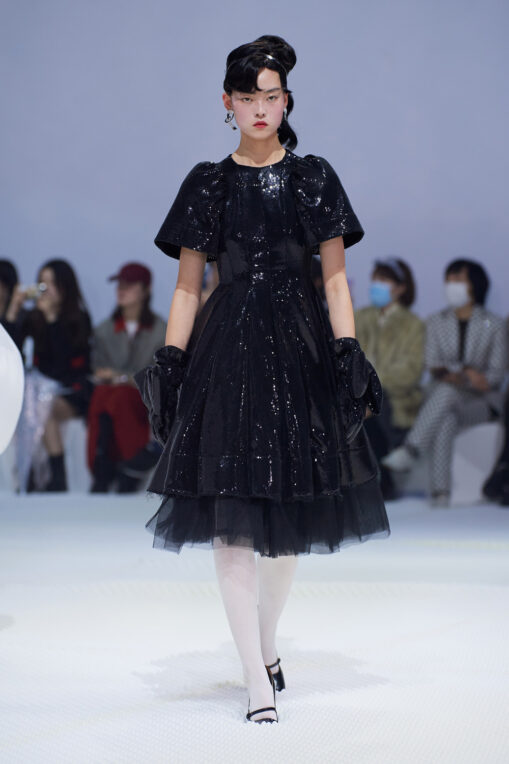 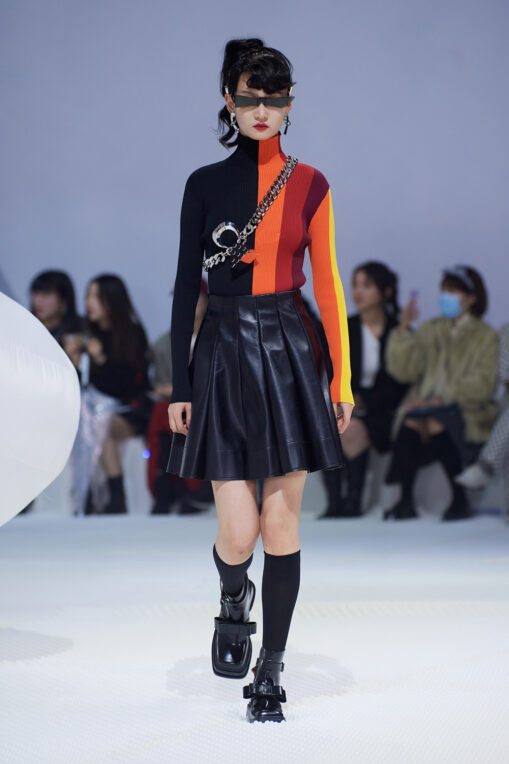 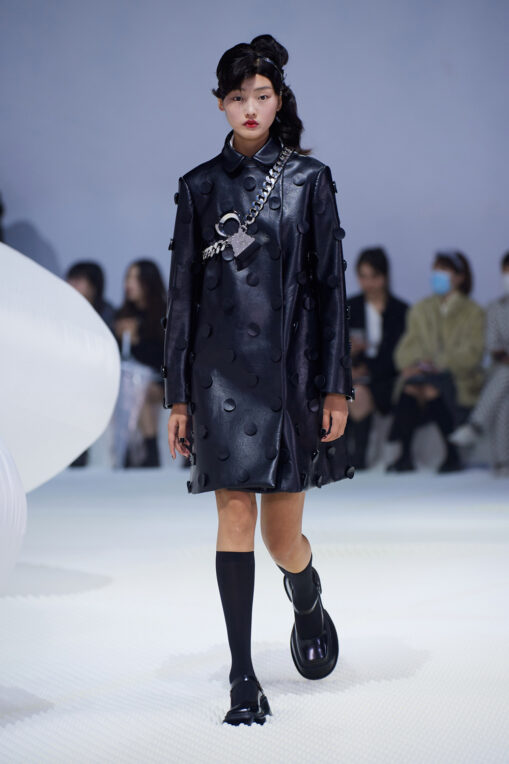 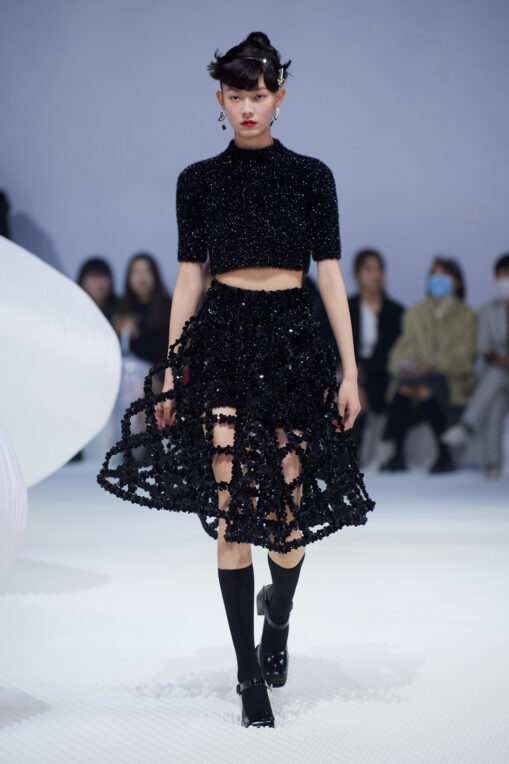 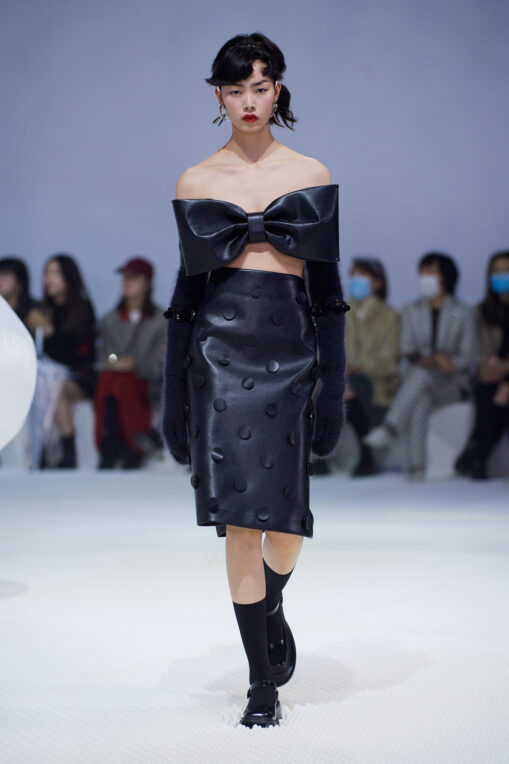