Frustrated by the words that he can’t say, Scott Ferguson speaks volumes with his work. The 23-year-old Alberta-native expresses himself through art; it’s the language he’s been practicing since he could hold a pencil. This inclination carried him throughout college and into a career as a 3D animator at Jam Filled Entertainment. When he’s not working there, the Ottawa-based artist comes home to his oil paints. His living room moonlights as a studio where he’s joined by emotionally-charged faces that are familiar yet foreign. Some of them are technically unfinished, but his body of work still feels complete.

When did you start drawing?

I started drawing when I was pretty young. My mom is a professional artist, so I grew up watching her, and a lot of other people in my family make art. I had an epiphany when I was five [that this what I wanted to do] while standing behind someone at the mall watching them draw an eyeball. 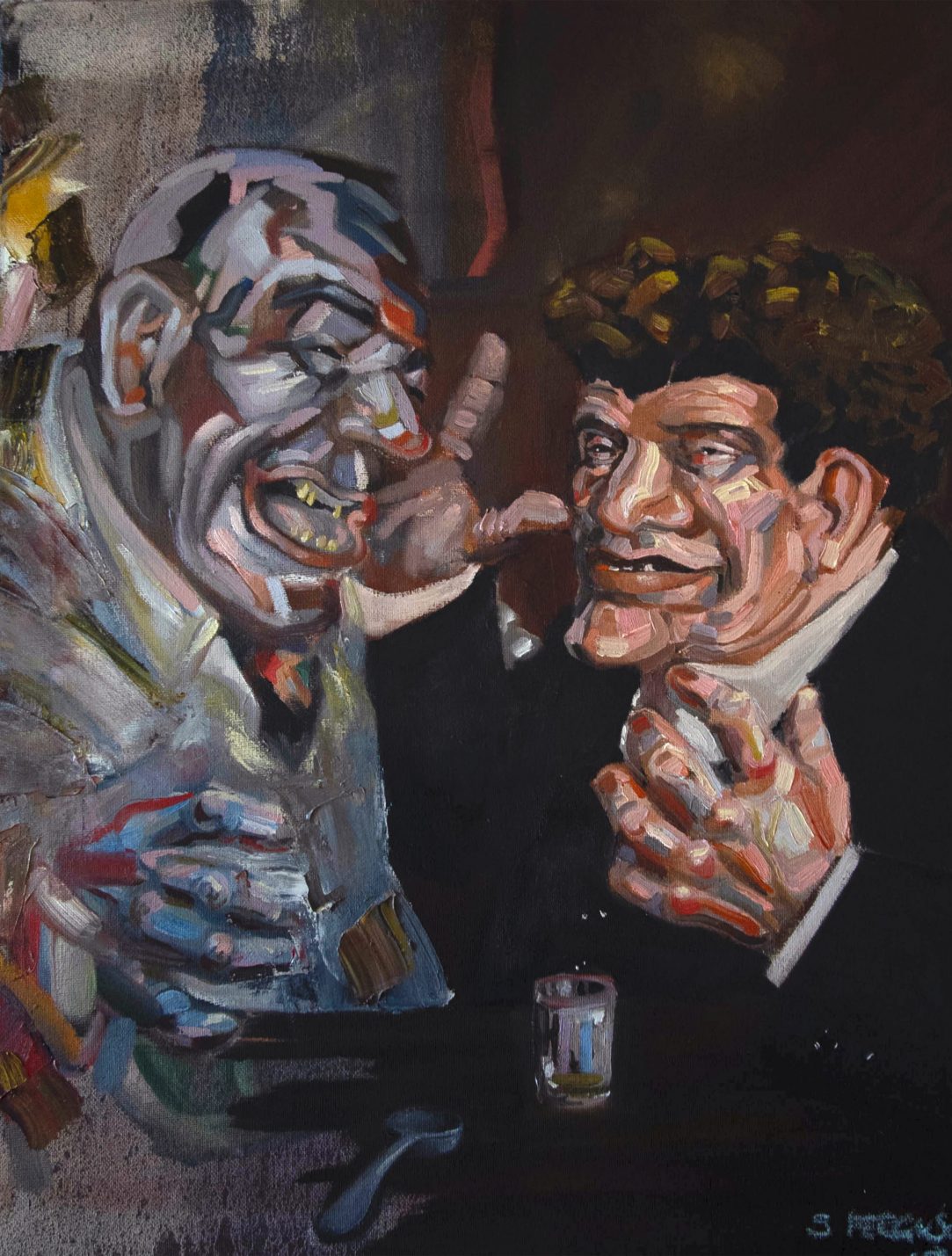 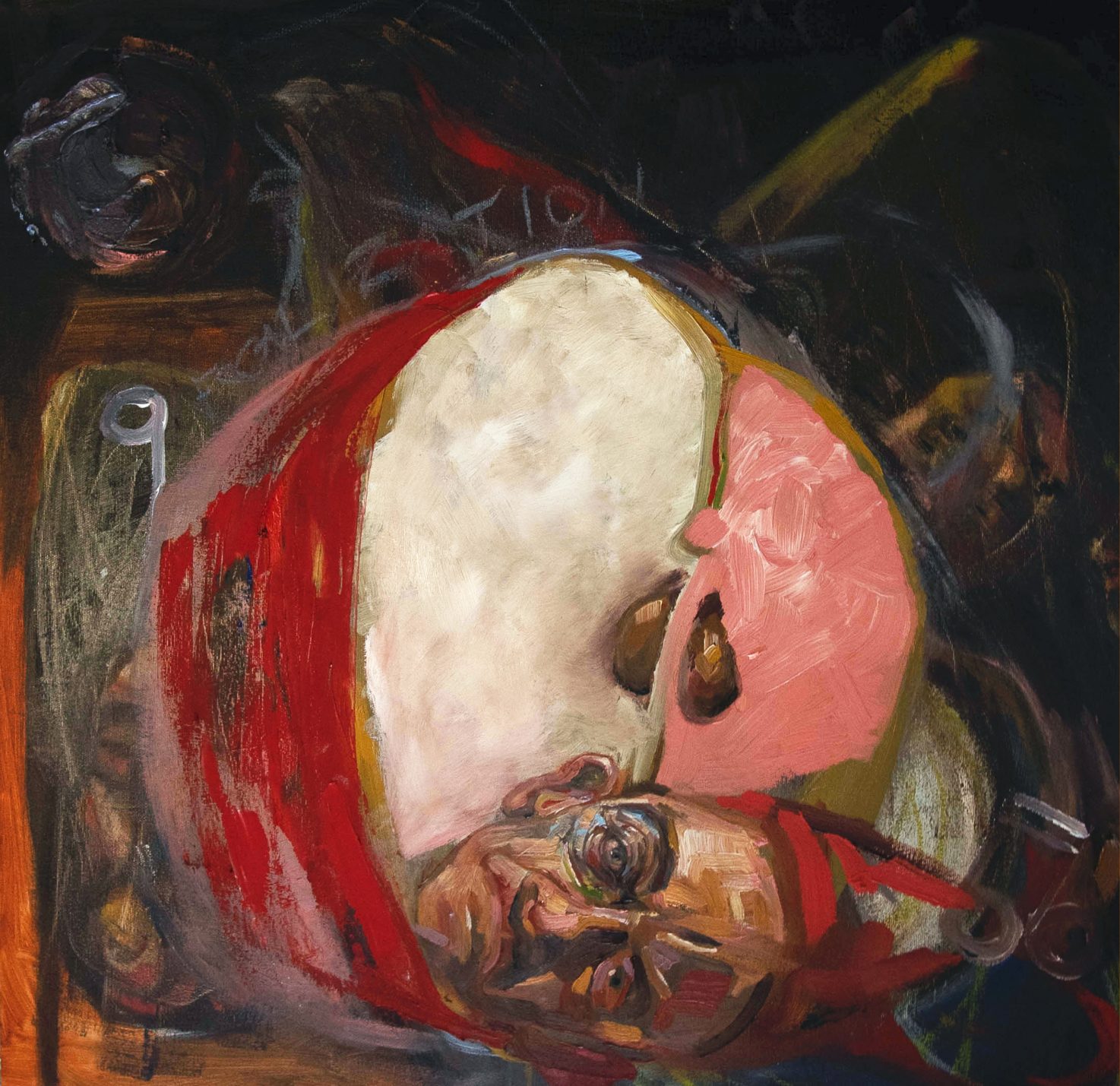 Have you had any formal training?

I studied Animation at Algonquin because a large component of it is drawing — to know the human figure is essential for moving it properly without distorting it. Initially, I thought about going into marketing, which is ridiculous because it didn’t interest me.

Can you describe your creative process?

I try to simplify things by defining a specific emotion with a composition, or I’ll just have the composition appear to me. It’s a mix right now. My work is continually shifting, and I allow it to take on a mind of its own, letting the subconscious flow. 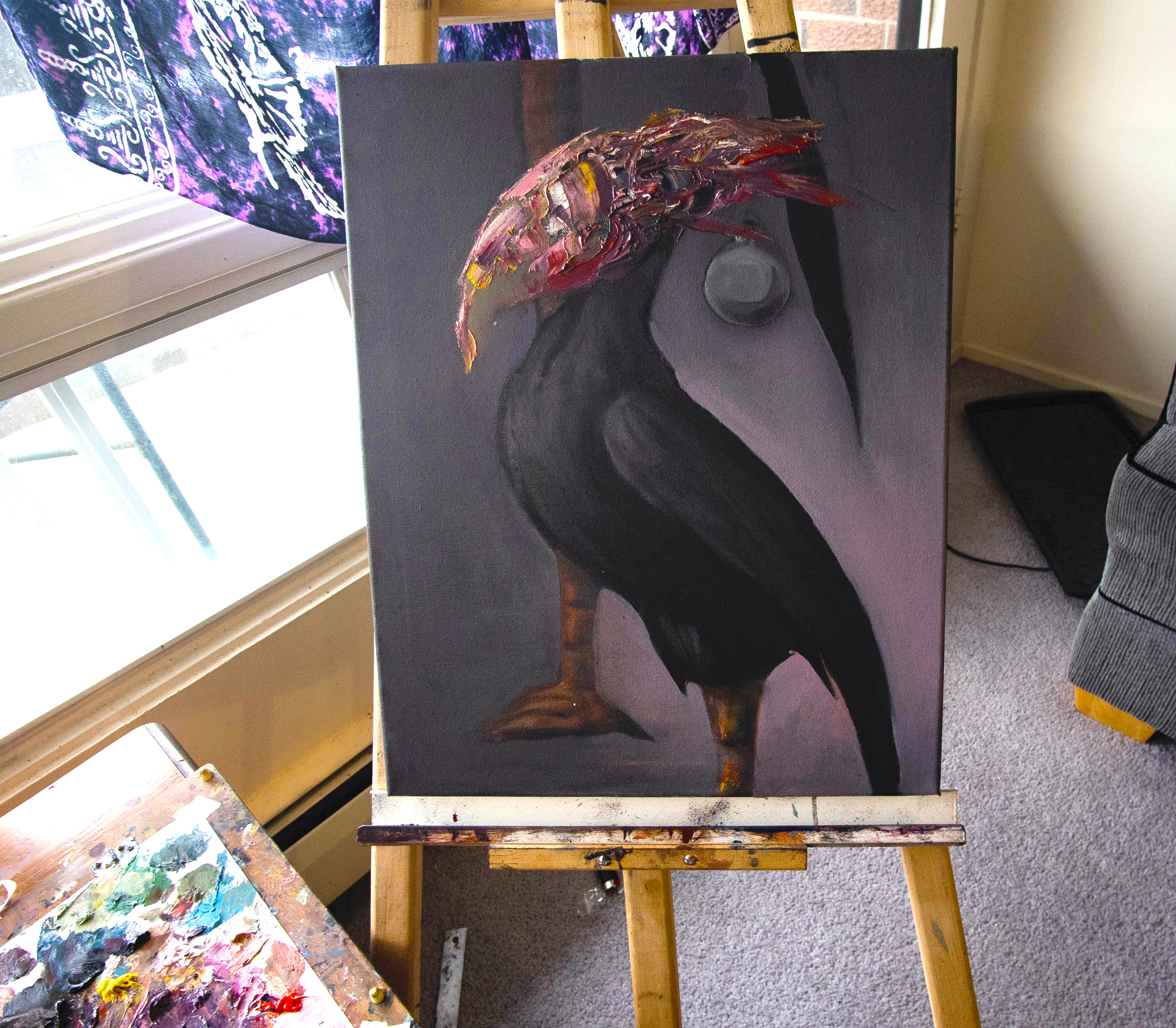 How would you classify your art?

I’m in the postmodern umbrella, and some of my tactics are Surrealist; for example, I have techniques similar to automatic drawing or Dali’s hypnagogia using a spoon. I focus on form and making it 3D. Overall, I like exploring things that feel familiar yet distant.

What do you attribute the darker elements to?

I don’t try to make my art dark. I start every painting intending to make something holy and beautiful, and they always get dark at the end. I think it’s because I like a lot of contrast and shadows, so naturally, there comes darkness. I was always drawing creepy creatures, evil dudes and ugly men, though. I haven’t figured out what attracts me to them. I’m generally pretty positive.

What are some motifs that can be found in your work?

I keep noticing crowns, masks, birds, hands, eyes and jester caps, but I’m not sure what they mean [yet]. 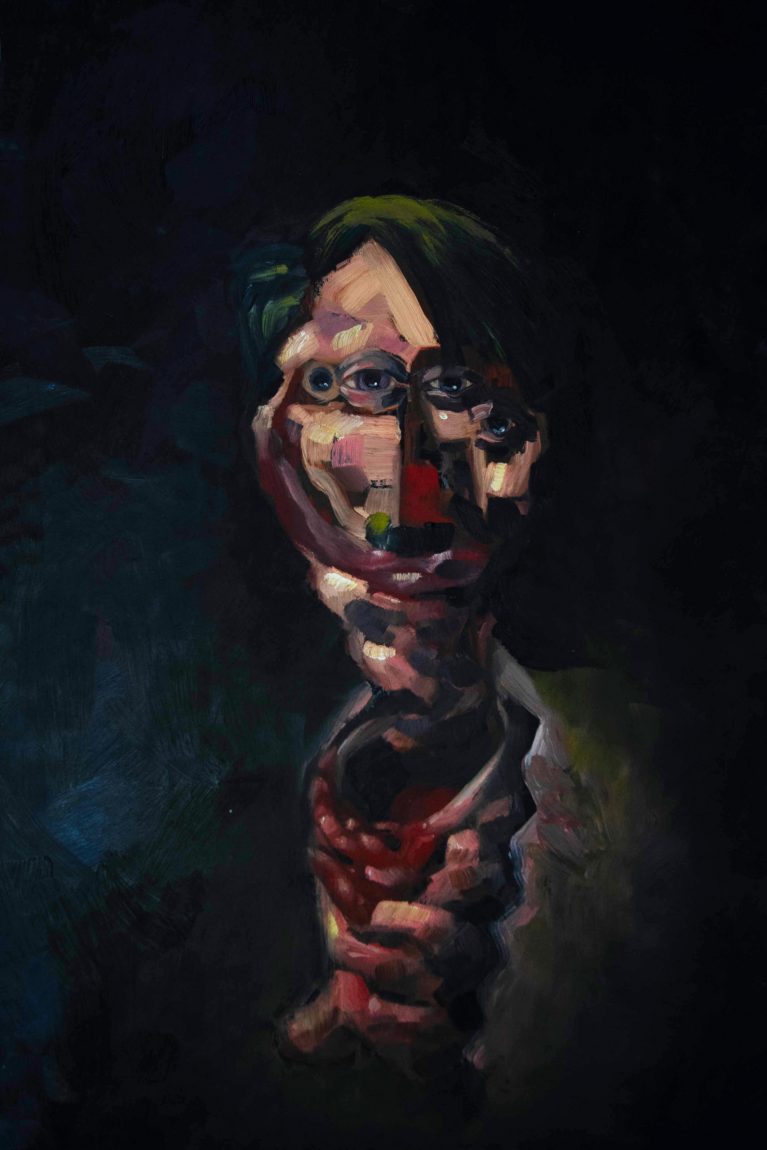 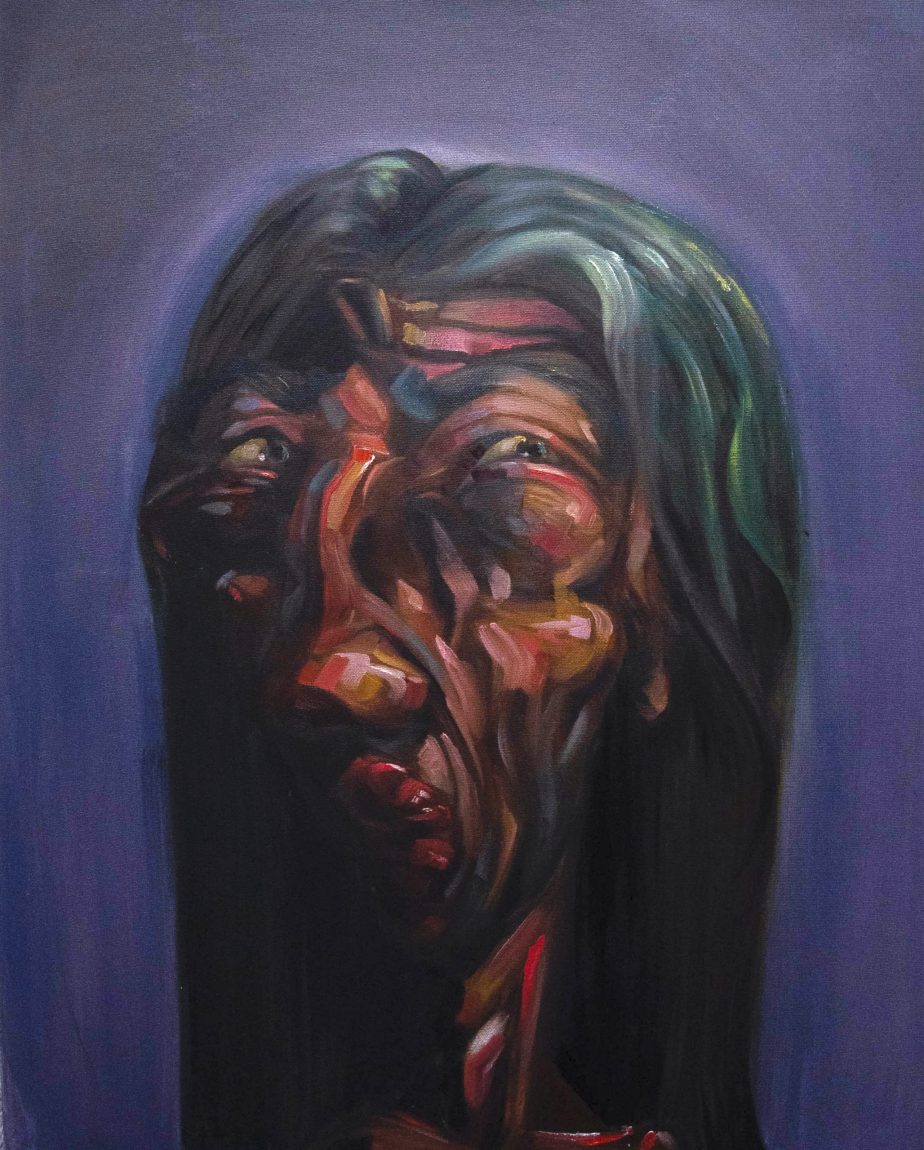 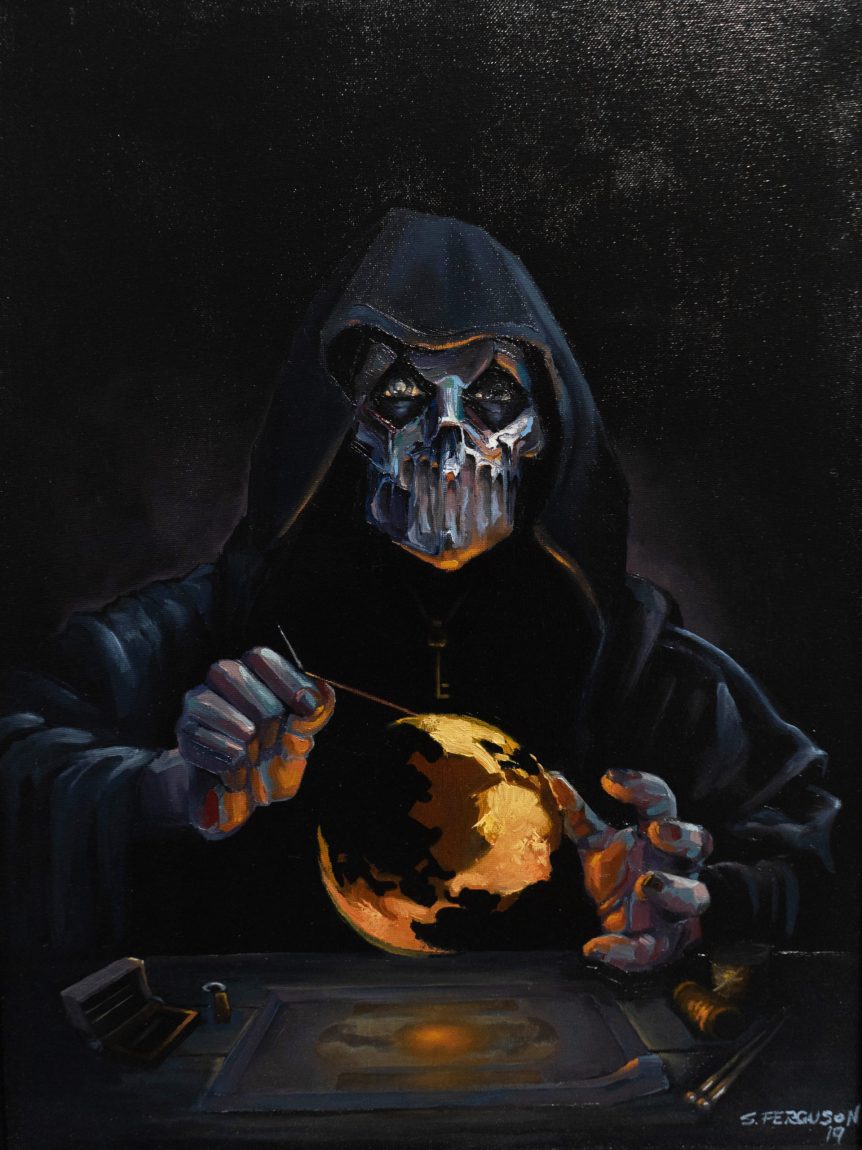 Who and/or what inspires you?

I borrow a lot from musicians for my art. In high school, Mac Miller was very impactful right when he was getting into his psychedelic phase. Lately, I listen to a lot of Idles and Death Grips; they’re very visceral, and I love working like that. My new man is Terry Riley [minimalist composer]. In terms of painters, Francis Bacon touches something very deep in me, and I love Max Ernst.

What shows and/or exhibitions have you taken part in?

Six of my pieces have been on display at the Ministry of Coffee since January. They’re trapped there now. I also had work on display at a Modi + Ficarro pop up shop recently. In November, I made a two and a half minute psychedelic visual installation for an art show called “Mindmatter.” Then back in September, I was part of a paranormal-themed group show at Oz Cafe called “High Strangeness .” 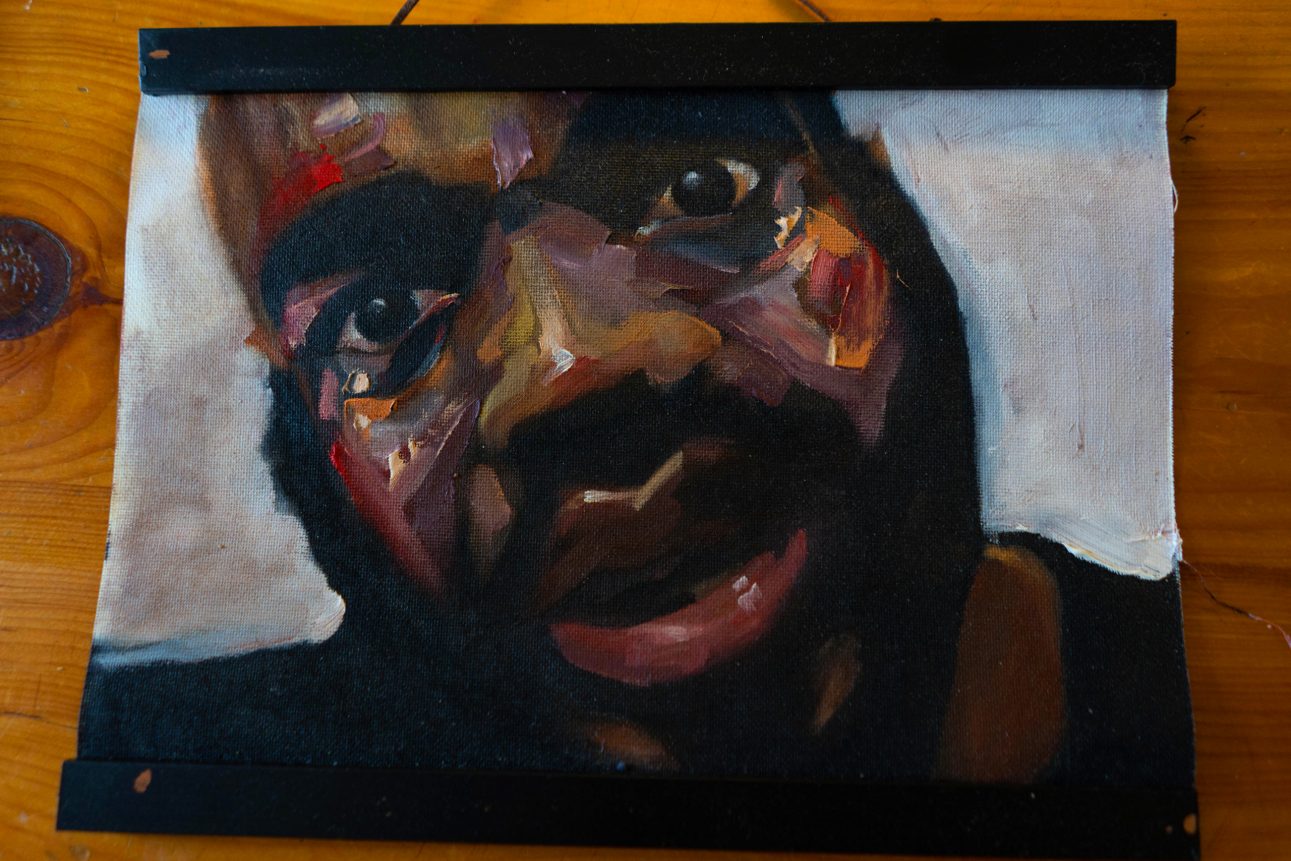 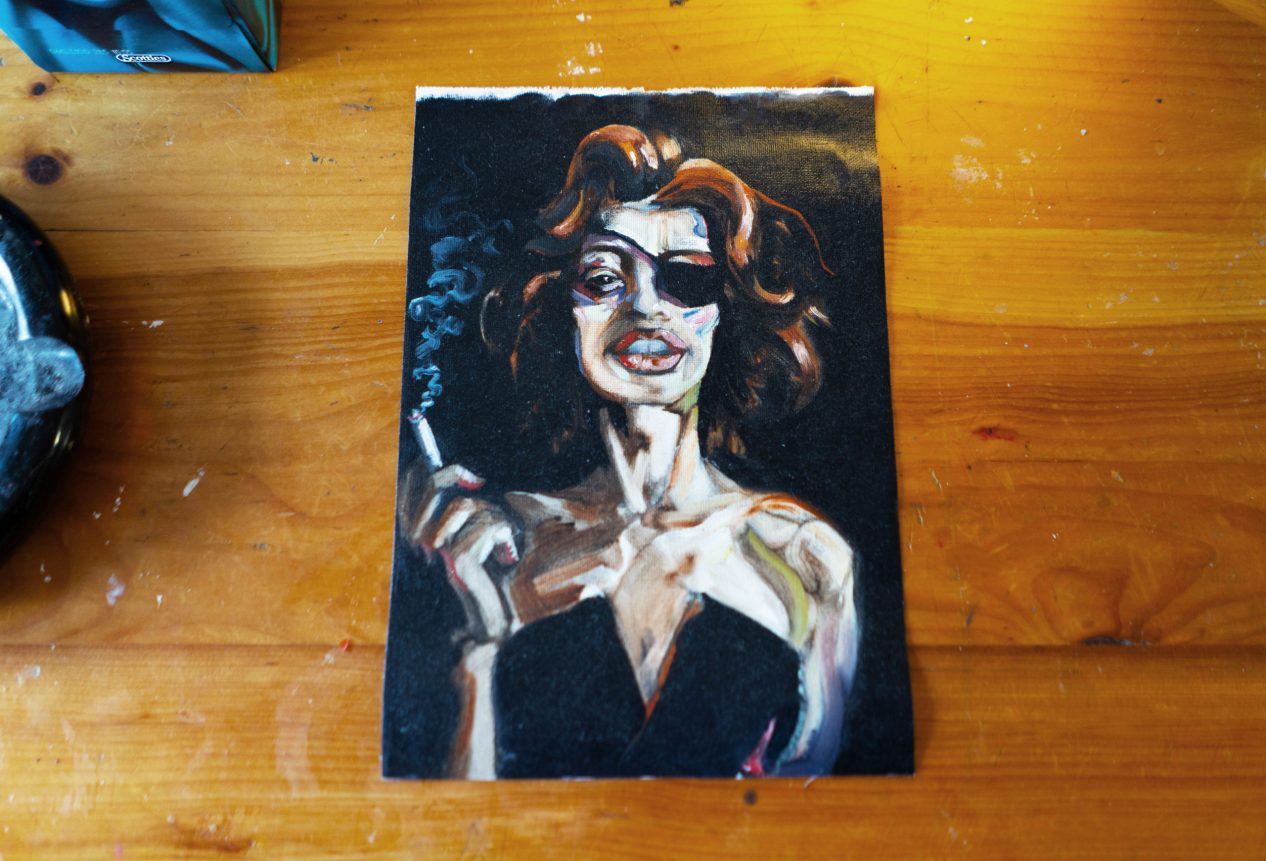 How has your art progressed?

I’m trying something new: not being an asshole and abandoning my initial intention of the painting. For example, all of my paintings are colourful, but individual colours can get lost in this way. It is something I’m working on because colour can be very potent if you’re careful.

What aspect of painting do you find most challenging?

If you plan your painting well, you can just go through the motions later. If you don’t plan it, you’ll be done faster, but you’ll often overwork things. If you can simplify things and it still looks good, then it means you understand it far more. Anyone can add more detail. I have a hard time balancing the two.

What is your favourite piece and why?

I love the ones that are simple and took the shortest amount of time because my biggest curse is overworking paintings. My favourite is probably “Down the Hall” (pictured above). I felt like a little kid making it; it’s very playful.

Are you pursuing any other creative ventures?

I’ve directed my own visualizers to songs that mean a lot to me, just excited by the idea that the artist would see them. I also play piano a little bit and occasionally make beats that are horrible. 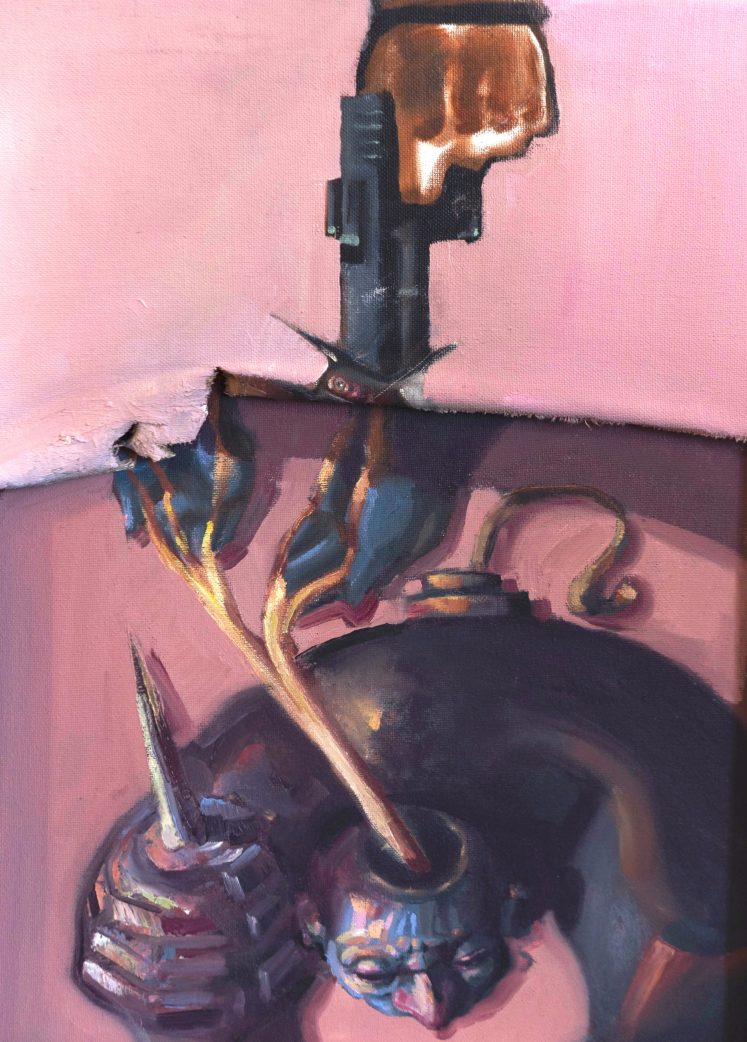 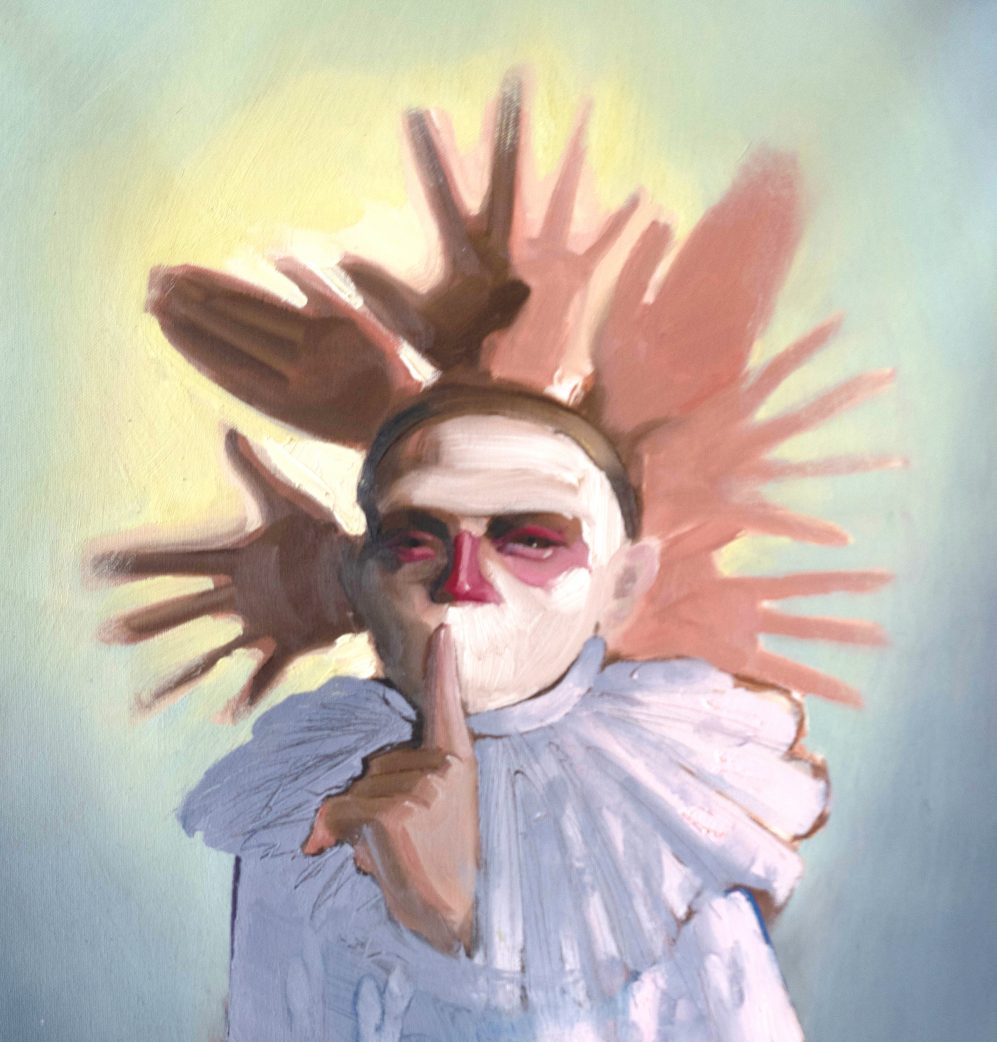 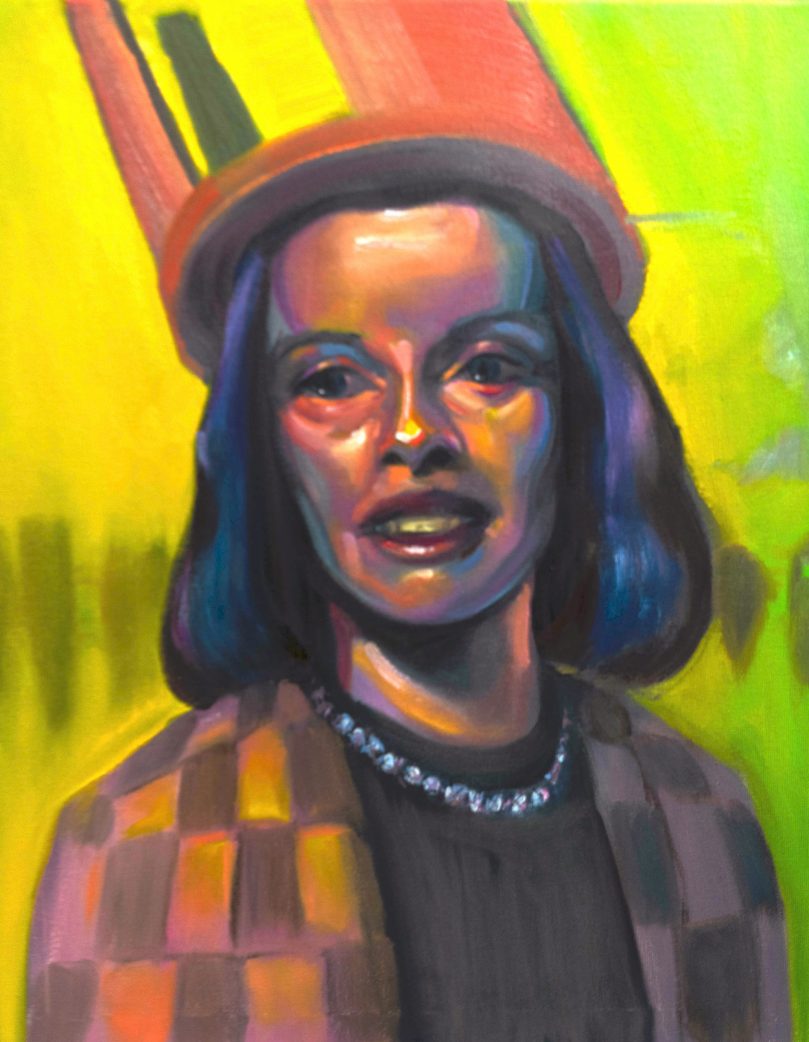 What do you find challenging about being an artist in Ottawa?

You can only go so far here. Alternatively, you can develop these delusions of grandeur, imagining that you can make Ottawa the new New York.

What can we expect to see from you in the future?

Right now [in quarantine], I’m building my arsenal of paintings. I want to sell them, but I don’t want to be lobbying for people’s opinions. The fantasy, of course, is that the art sells itself. 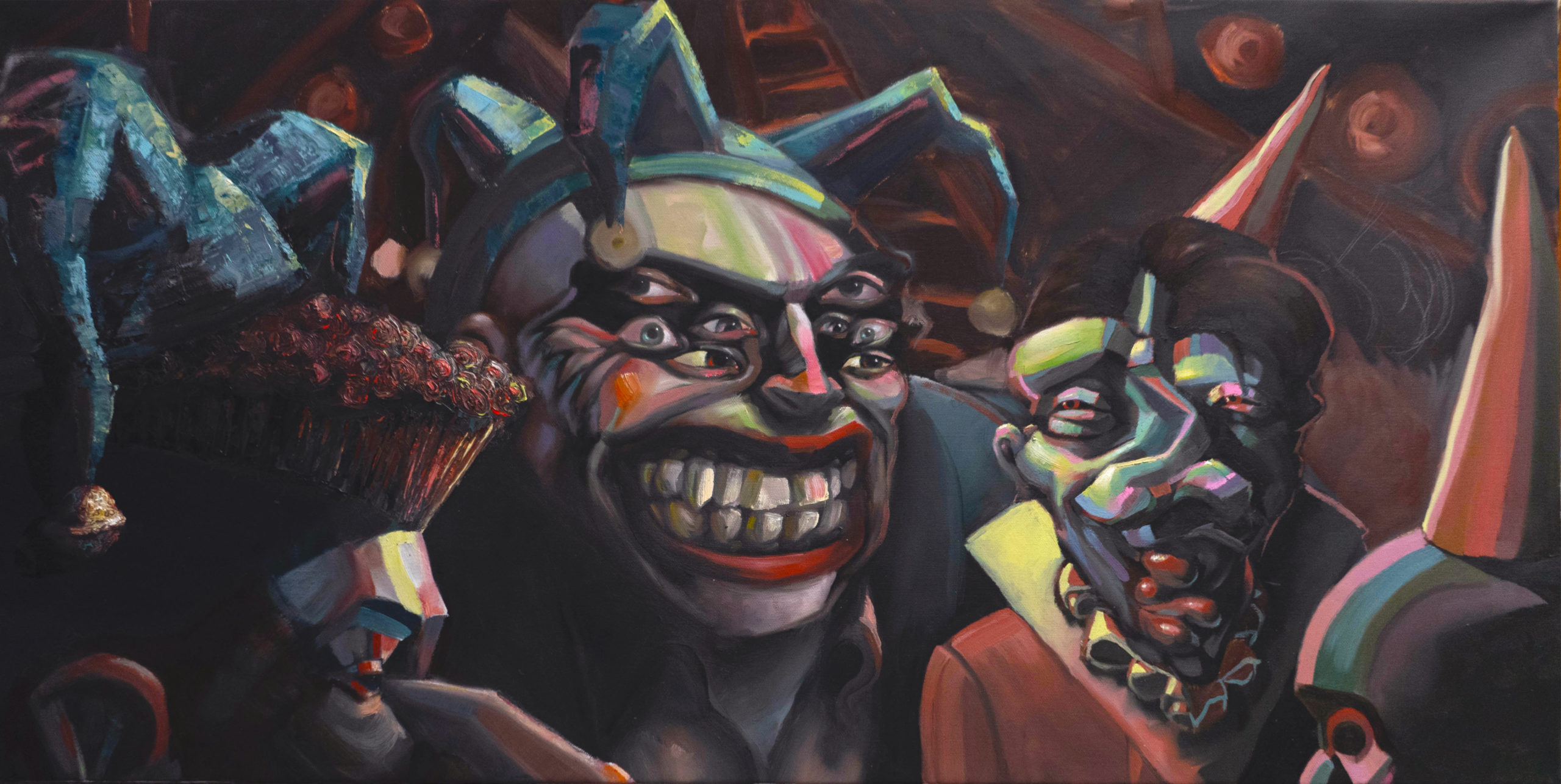 All photos courtesy of Evan Hartling at Solaris Medias