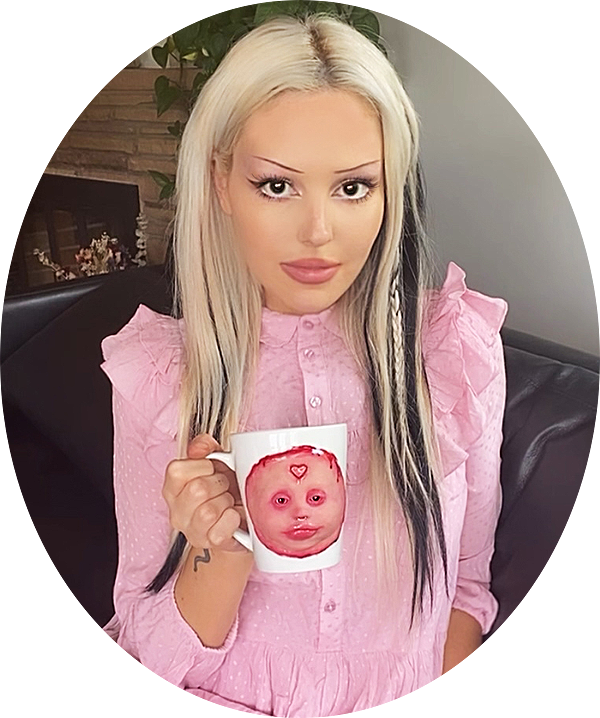 Meet Pixie Blood, the Vancouver-based artist pouring her heart into personified planters. Sculpting a safe space for more than just potted pets, her multipurpose creations, or creeps, celebrate the many faces of human nature. Like us, all they want is to be seen, and not just in a full beat, but open wounds and all.

Can you tell me about your journey to becoming a full-time artist?

It’s been a long one. I never actually thought I could make art my job. I used to stubbornly reject the idea, thinking if I had to rely on it for income, it would suck the integrity and inspiration out of me. I realize now that was just me being scared I would fail. My mom tells me I came out of the womb making art. It’s the only thing I’ve ever really liked to do. I was terrible in school, had a hard time socially, and hated sports. Art has been my escape and my passion since I can remember. It was always a private hobby, though. I could barely pass art class in school, always having to do extra credit and last-minute assignments to ensure I didn’t fail. I thought this was a reflection of my abilities and decided I would only do it for myself. At this time in my life, drawing was my obsession. I had sketchbooks upon sketchbooks filled with manifestations of my emotions, just a pure vomit of my feelings unfiltered.

After high school, I was depressed and had no idea what to do with my life. I went through years of introspection, self-discovery, moved across the country and back, and went through an extreme metamorphosis to finally figure out who I was. I decided to put everything into art. I had been painting a lot and felt like my artistic expression was ready to be seen by others. I sold my paintings and decided to go to film school to learn special effects makeup and large-scale sculpting. Using my hands to create something in the real world felt so freeing. I felt more connected to it than any other art form. It’s like magic making something come to life. I started selling little ashtrays and pots to my friends on Instagram, but I had no idea of the response it would get. People from all over started requesting pieces for themselves, and I was thrilled to open an Etsy shop to oblige them. I had no idea it would take me to where I am now. I feel extremely grateful and happy to be living the dream my high school self never thought possible. I’ve only just begun. 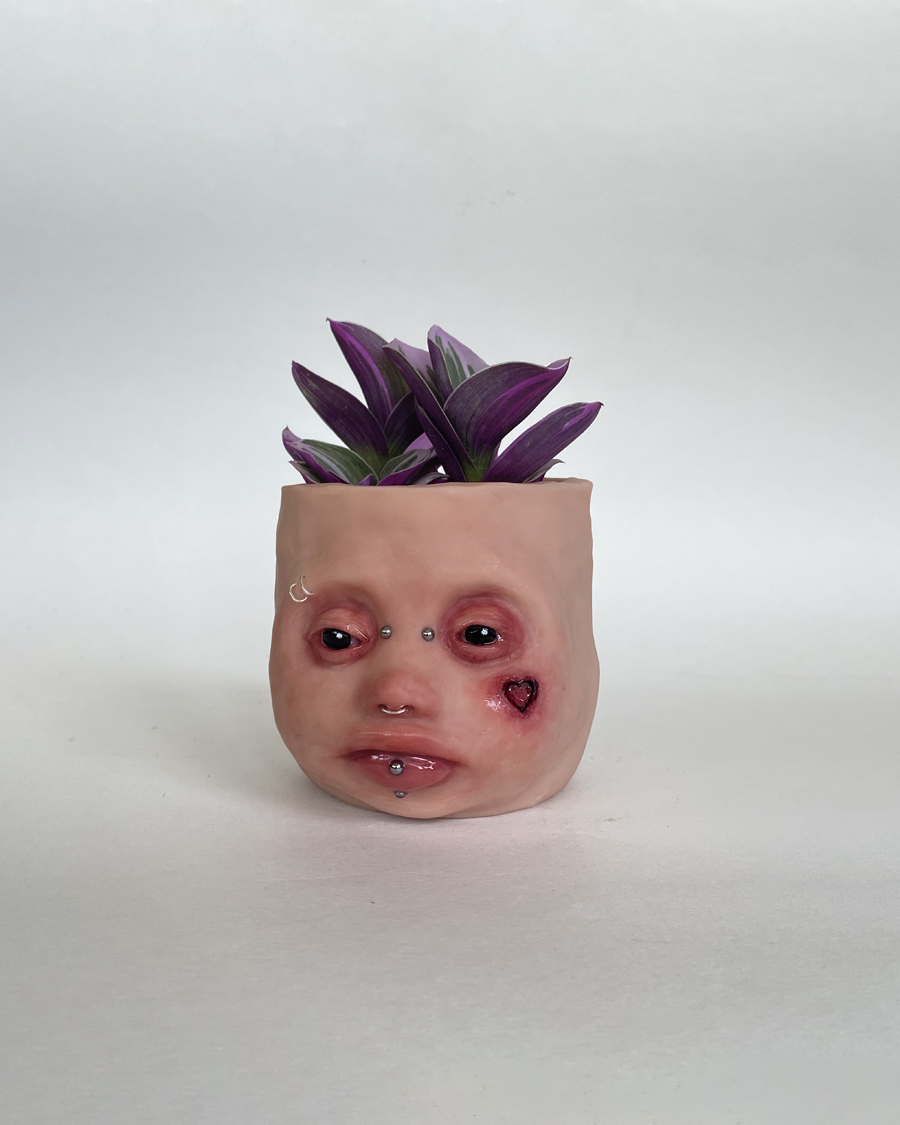 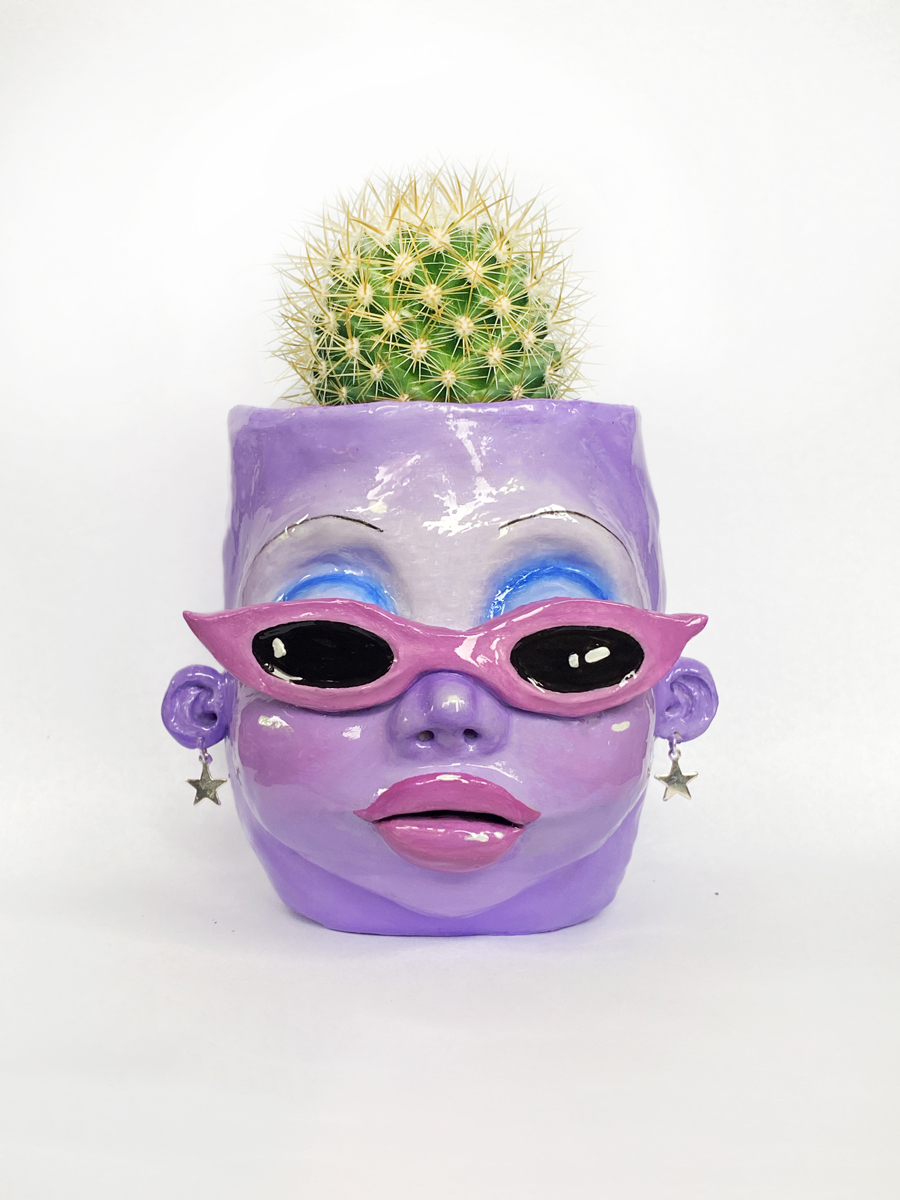 How have you combined your passion for makeup with sculpting?

Makeup is so beautiful. It’s wearable art. I love the idea of art that also has a function. I used to wear makeup as a mask to hide behind, thinking it was necessary to feel beautiful and protected. Being a redhead naturally, I was relentlessly bullied as a child for my complexion and hair colour, so makeup masked that part of me. As I grew older and my relationship with myself changed, I no longer used makeup to suppress and hide my truth but as a tool to express it even further! Makeup can be an extension of who you are, and I think that’s magical. The creeps that I make are all little pieces of me. They all tell a story. Sometimes a creep’s story involves elaborate makeup that evokes a particular feeling, strength, femininity or playfulness. I’m pulling all these feelings out of myself into a physical form.

What is so endearing to you about the name ‘creep’?

It just fits them perfectly. I used to call them creepy-cute creatures when I started, and then I just ended up calling them creeps for short. It also gives me a sense of freedom to let people know these aren’t always going to be pleasant to look at; a bit of a warning. 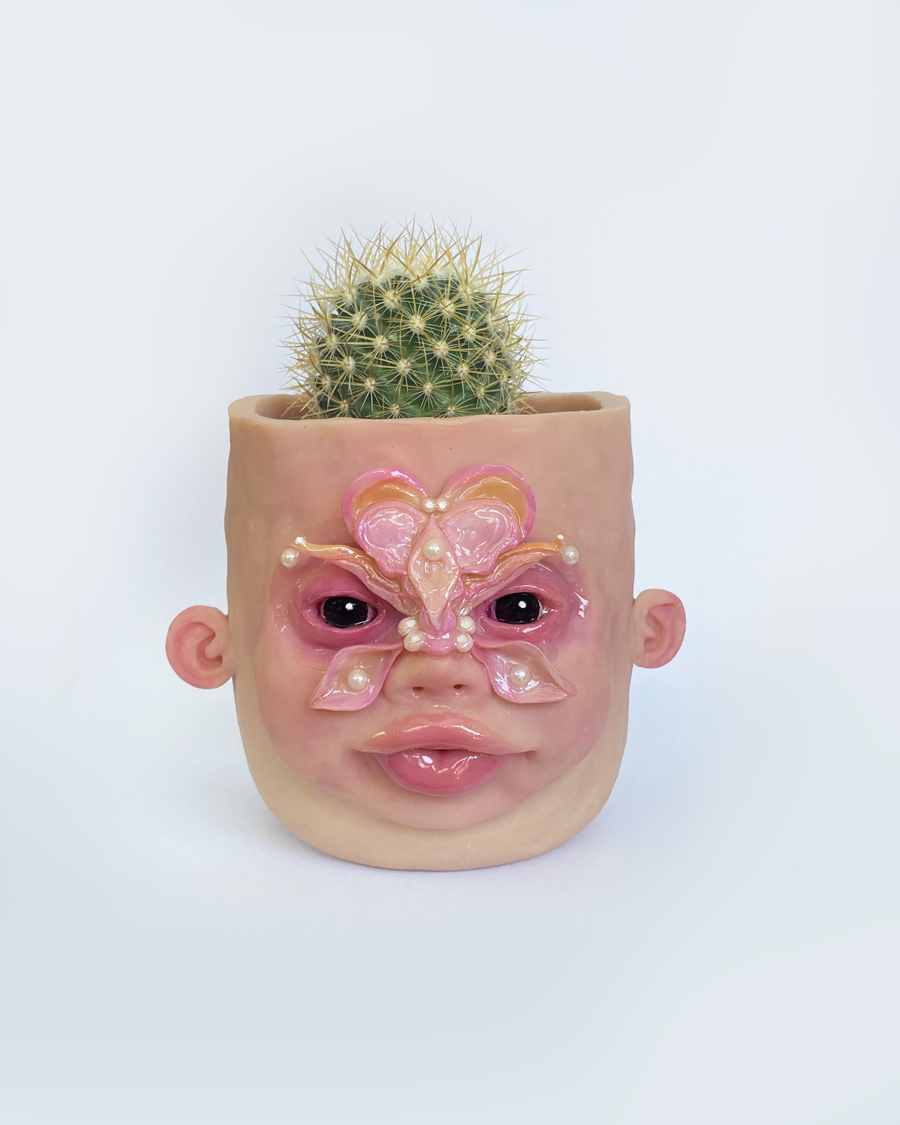 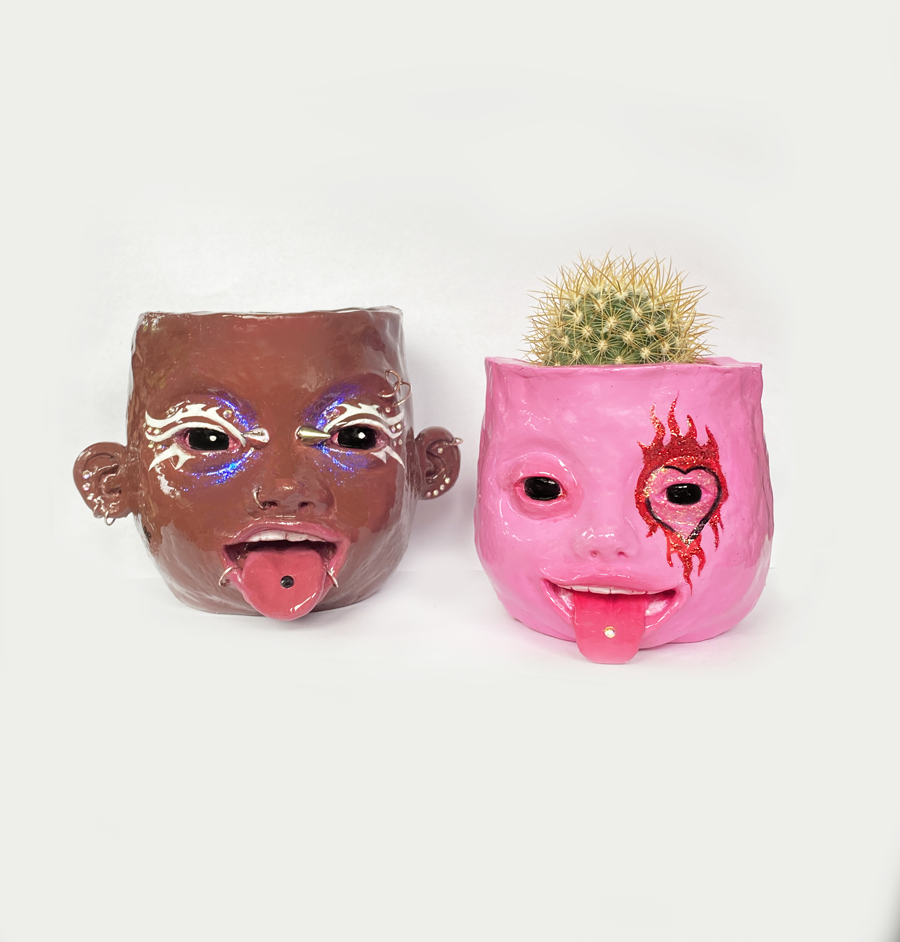 Horror manga, specifically Junji Ito’s work, has inspired many of your creations. What draws you to graphic novels such as Tomie and Uzumaki?

I was raised in a family of black belts. My father owned and taught at a Japanese Ju-Jitsu Dojo, and my whole family was involved, including myself. That was my first immersion into Japanese culture. When I was a child, I collected manga and traced or copied the images in the books when I was learning to draw. I, like many others, loved shows such as Sailor Moon, Card Captors, Digimon and when I was older, Death Note, Cowboy Bebop, and Elfen Lied.

When I discovered Junji Ito, I was instantly transfixed by the image of a beautiful girl having a disgusting demon attached to her face. I think that feeling is relatable to anyone who’s gone through any kind of identity issue. The pressure girls face to be perfect and beautiful all the time can be crippling, and of course, no one can be those things all the time. The demon taking over Tomie’s body is like a freedom of the ugliness inside us all, which is what a lot of my work is about — freeing the ugly. 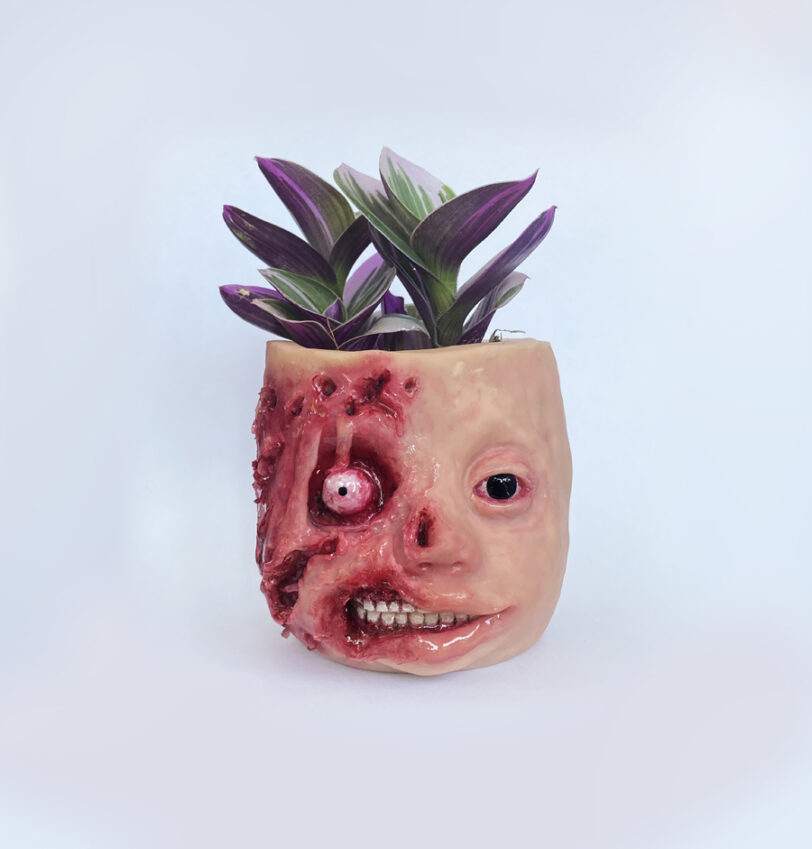 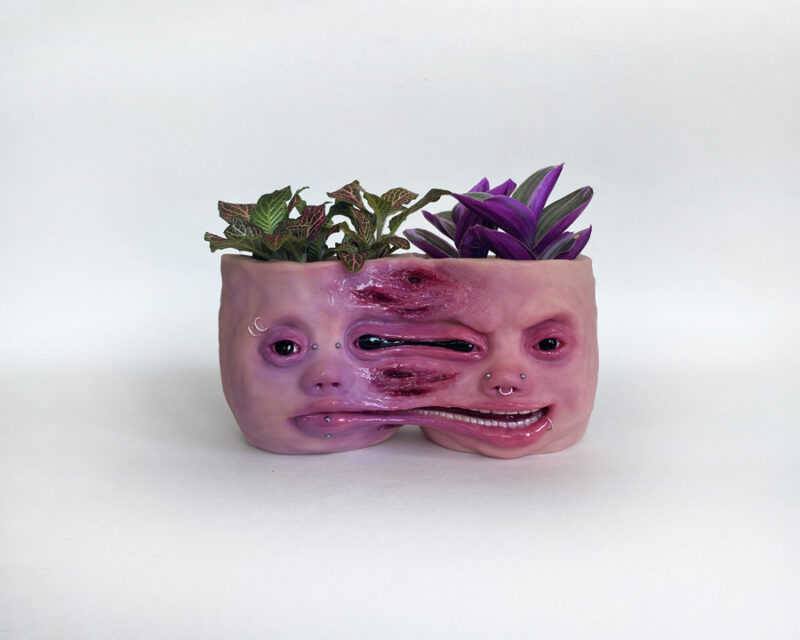 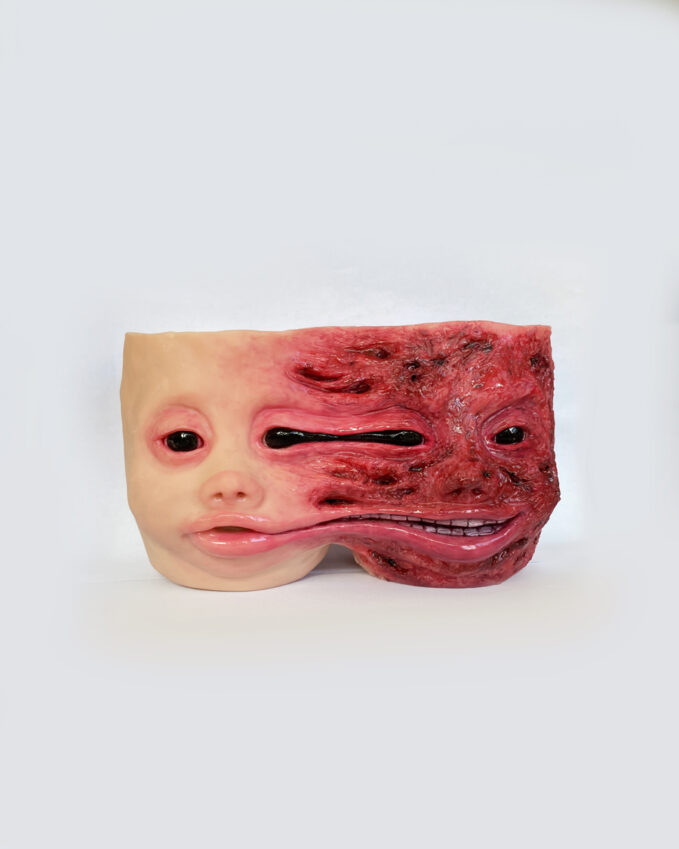 How are your creeps a reflection of mental health issues? How have they helped you grow?

I’m always depicting many faces, contrasting images or emotions. I’m making art that is ugly because I’m learning that being ugly is okay. I’m not making art that is reflective of perfect mental health. I struggle with severe anxiety and intrusive thoughts, among other things. My sculptures reflect that battle between the socially acceptable part of myself and the nastier parts. The parts of myself I want to believe are who I really am versus the negative thoughts and impulses I try to disassociate from. By no means have I figured it all out. I’m still struggling. My art shows that struggle.

Why do you think some people are frightened by your work?

I’m not sure if it’s cliche to say, but “Art should comfort the disturbed and disturb the comfortable [Cesar A. Cruz].” I don’t think art has to be that way, but I definitely think it applies to mine. I don’t care if people think my work is too disturbing. I’m not making Marvel movies. Many people seem to be living their lives as the tip of an iceberg. There’s so much underneath the surface that you have to actively try to uncover. Some people just aren’t there yet, and that’s fine, but they probably won’t like my art. 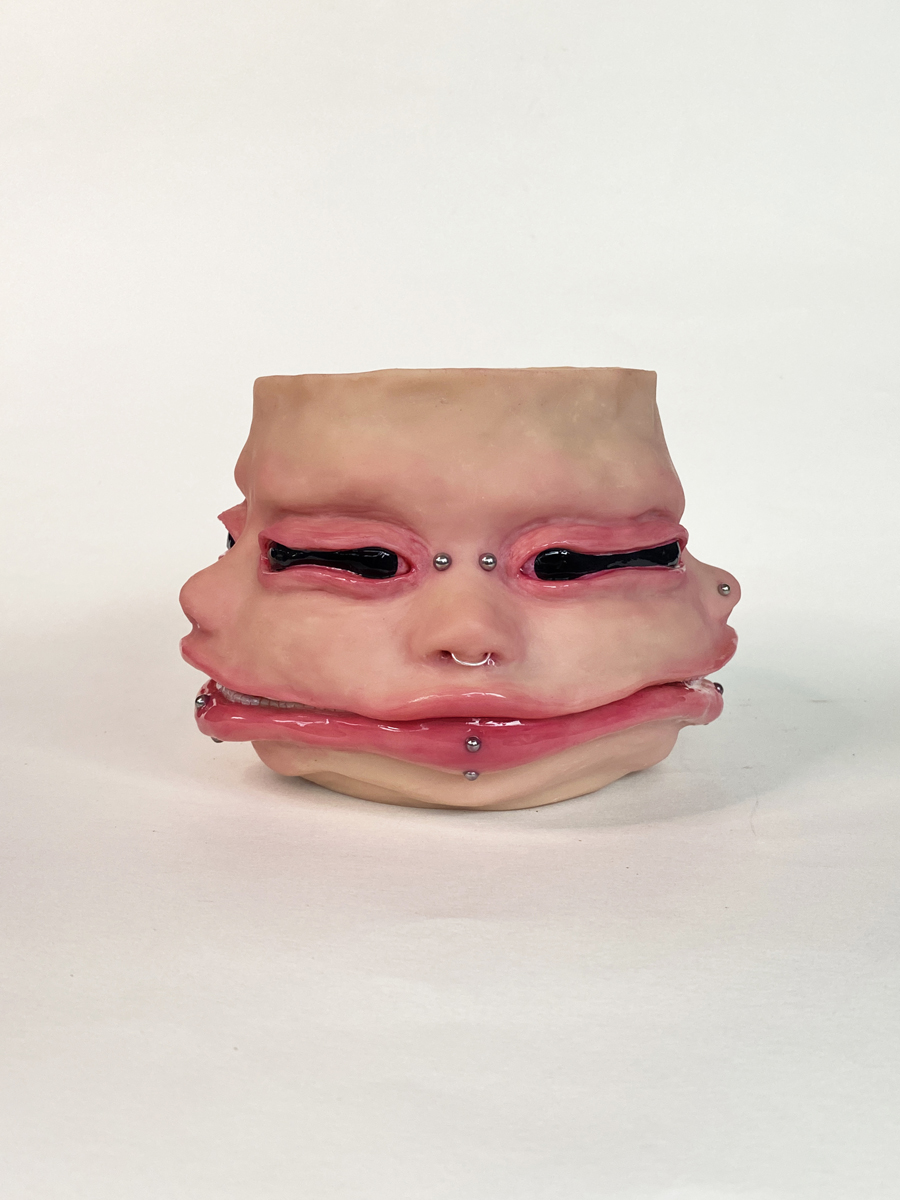 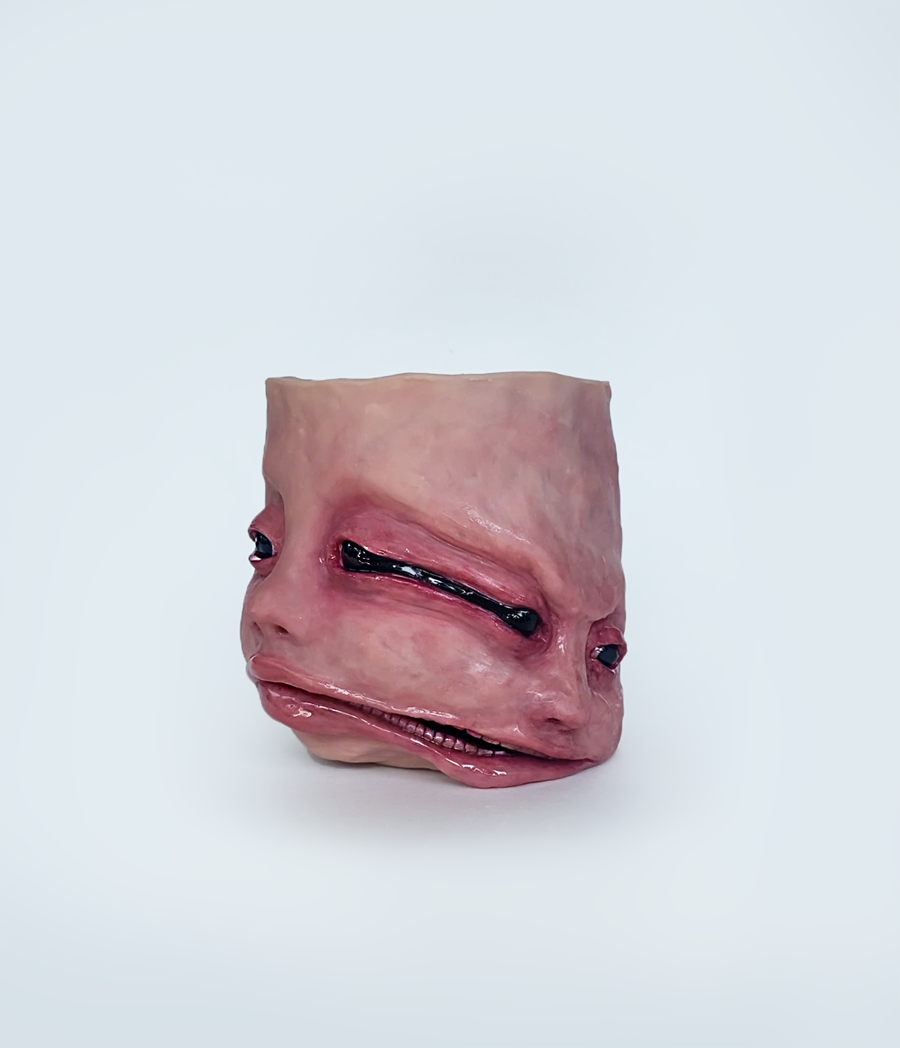 What was your thought process behind the name ‘Pixie Blood’? How does it reflect your philosophy in life?

Anyone who knows me knows I love contrast. My preferred aesthetic has always been some form of creepy/cute combination. If I’m going to dig deep, I’d say it comes from me being raised as a tough cookie, in ju-jitsu three days a week against my will and knowing how to take down a full-grown man by the age of 10. That hard/soft personality has always fit me. I don’t even remember how I came up with Pixie Blood. I just always had it in the back of my mind as my alter ego. I don’t really identify with my real name. I mean, it’s fine, but I love the idea of deciding your name. I think there’s a lot of power in that. It’s a tool to help manifest who you want to be.

Why are your creeps not meant to be infantilized?

My sculptures are not meant to be babies by any means. I’m sure it’s the lack of hair that may confuse people into thinking they are. They are only meant to project a feeling of childlike innocence that everyone has access to. 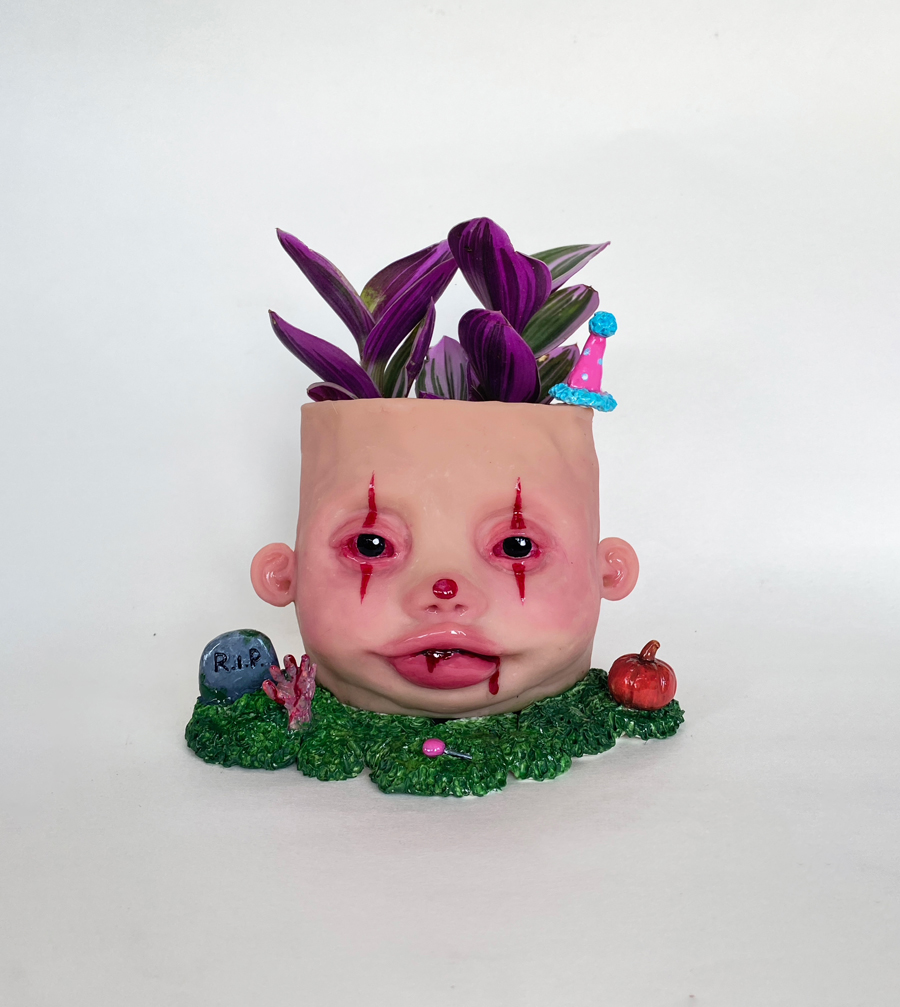 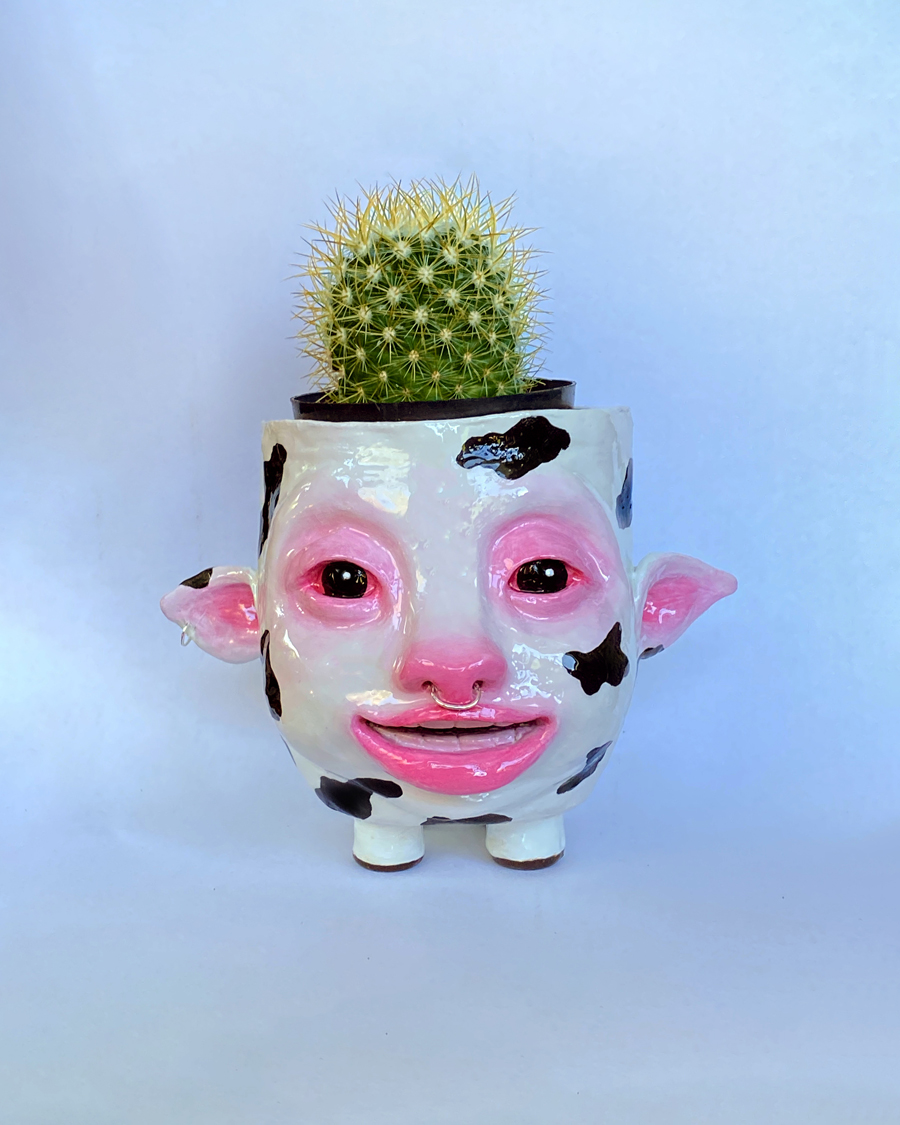 Does being made in Canada define them at all?

I’ve never felt a strong connection to any cultural identity. I’ve always felt like an outsider, so I feel as though my creeps are universal. I am very grateful to live in Canada, and it has a reputation for having some of the best living conditions in the world for some, but not all. While I am grateful for the opportunities that being born in Canada has given me, I don’t feel proud to represent Canada. Canada not only has a history of genocide but is still actively mistreating and abusing the rights of Indigenous people who live here. There are dozens of Indigenous communities with no clean drinking water, and one of Canada’s last old-growth forests, Fairy Creek, is about to lose a battle with the logging industry. That’s what I think of when I think of Canada, and obviously, I don’t feel as though that represents me or my art.

How would you describe the creep’s power of transformation?

My creeps are universal, and they’re adaptable. I don’t have a strong need to depict them as male or female; it’s irrelevant to me. They’re art! And art is a tool of self-reflection for the artist and viewer. Once they’re adopted, they’re yours, and they’re whatever you want them to be. 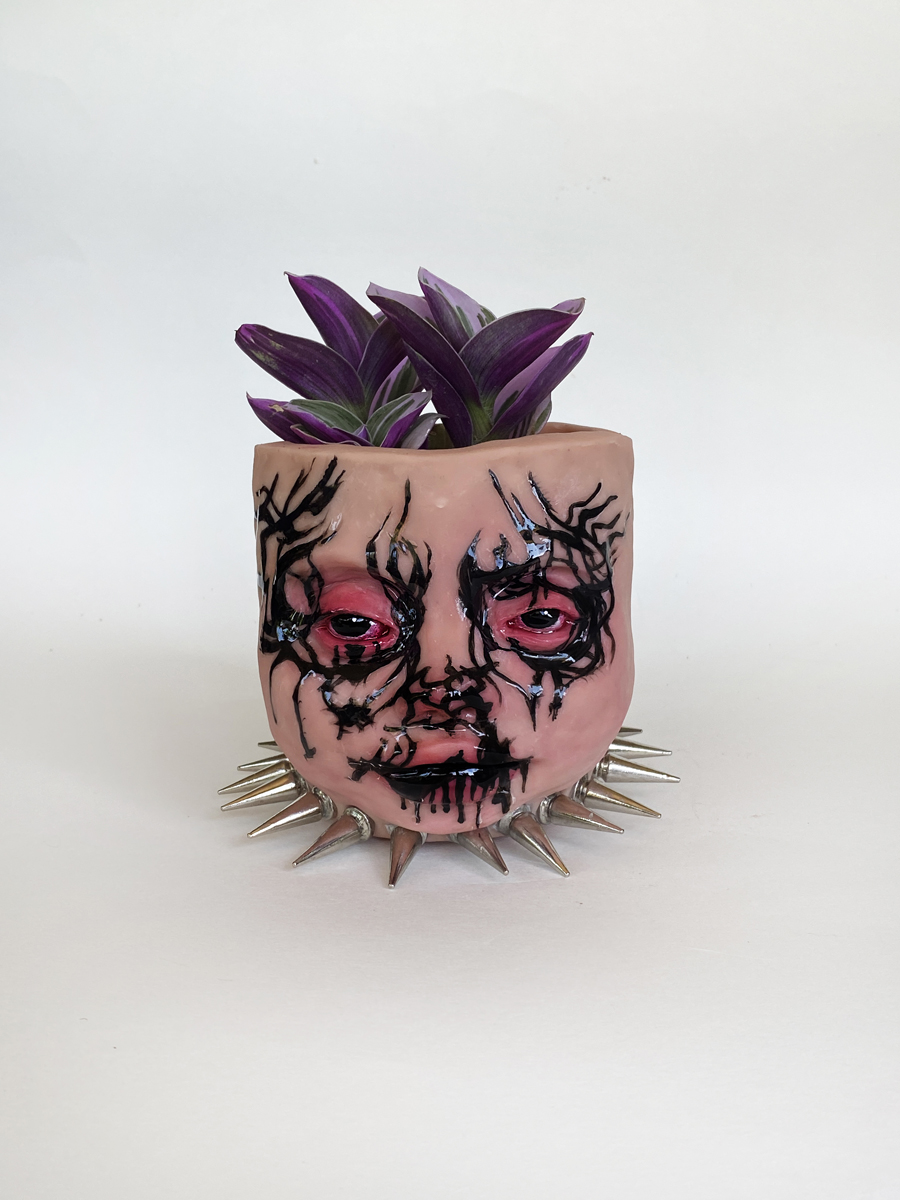 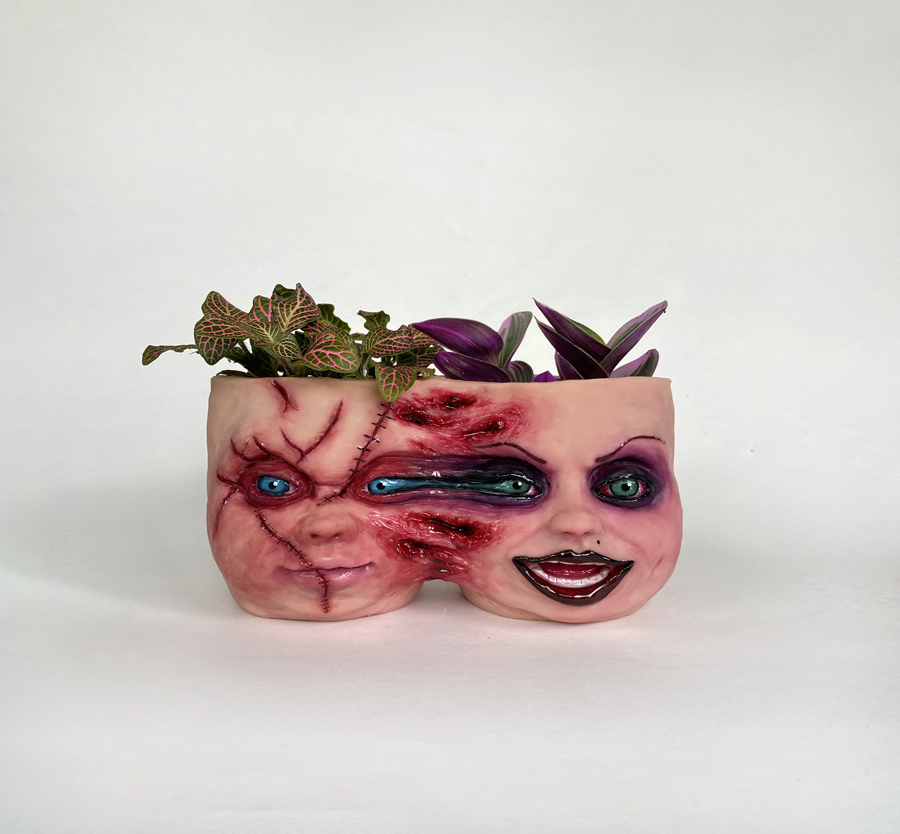 What keeps you connected to nature?

What’s next for you?

I’m definitely not going anywhere! I’ve just started, and I’m so happy to be doing what I’m doing. I’ll be making my little creeps for the foreseeable future, but I’d like to do more large-scale pieces and installations. I have an obsession with sculpting humans and their bodies and faces, but I’d like to explore that same theme in a more abstract way and on a much larger scale.

We are no stranger to Pixie Blood’s creeps. They’re us in planter form, part Bowie, part Cenobite. And therein lies the beauty of self-acceptance — it grows from the glitter and the gore. 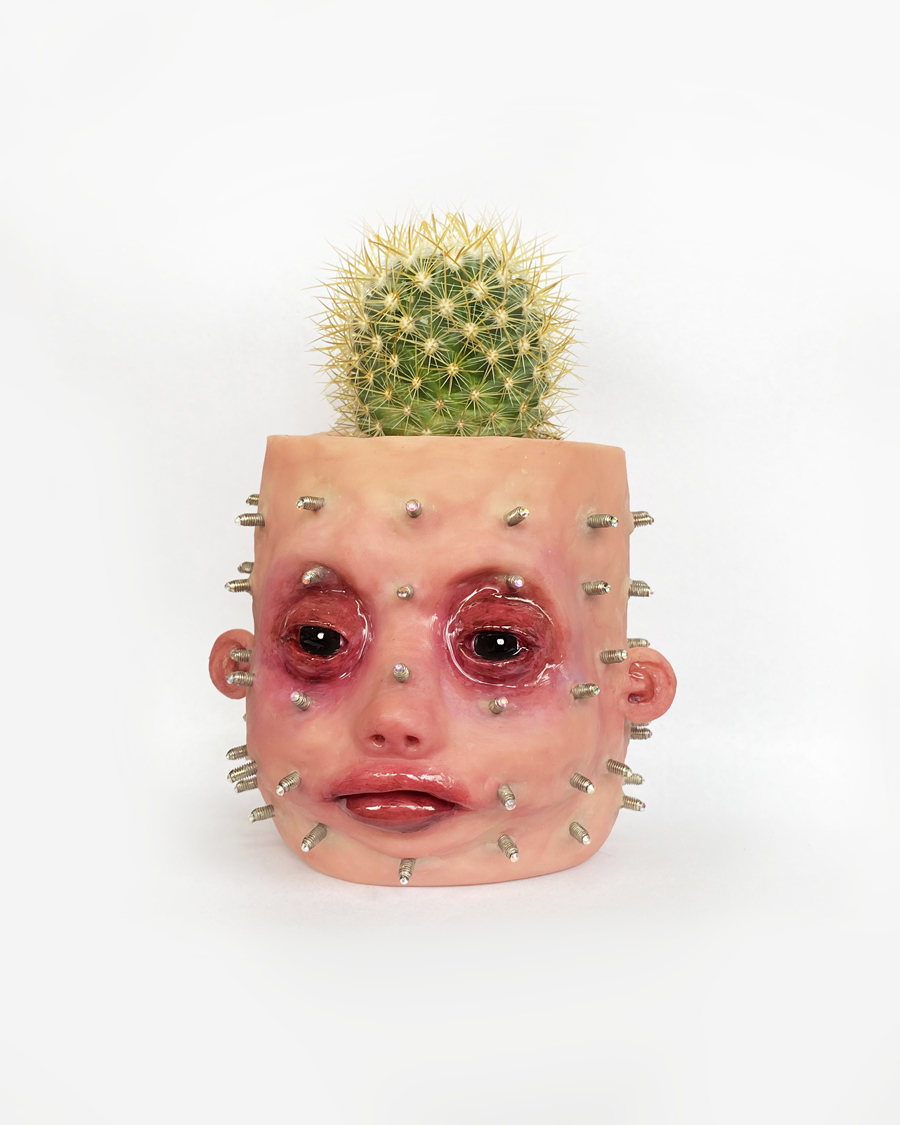 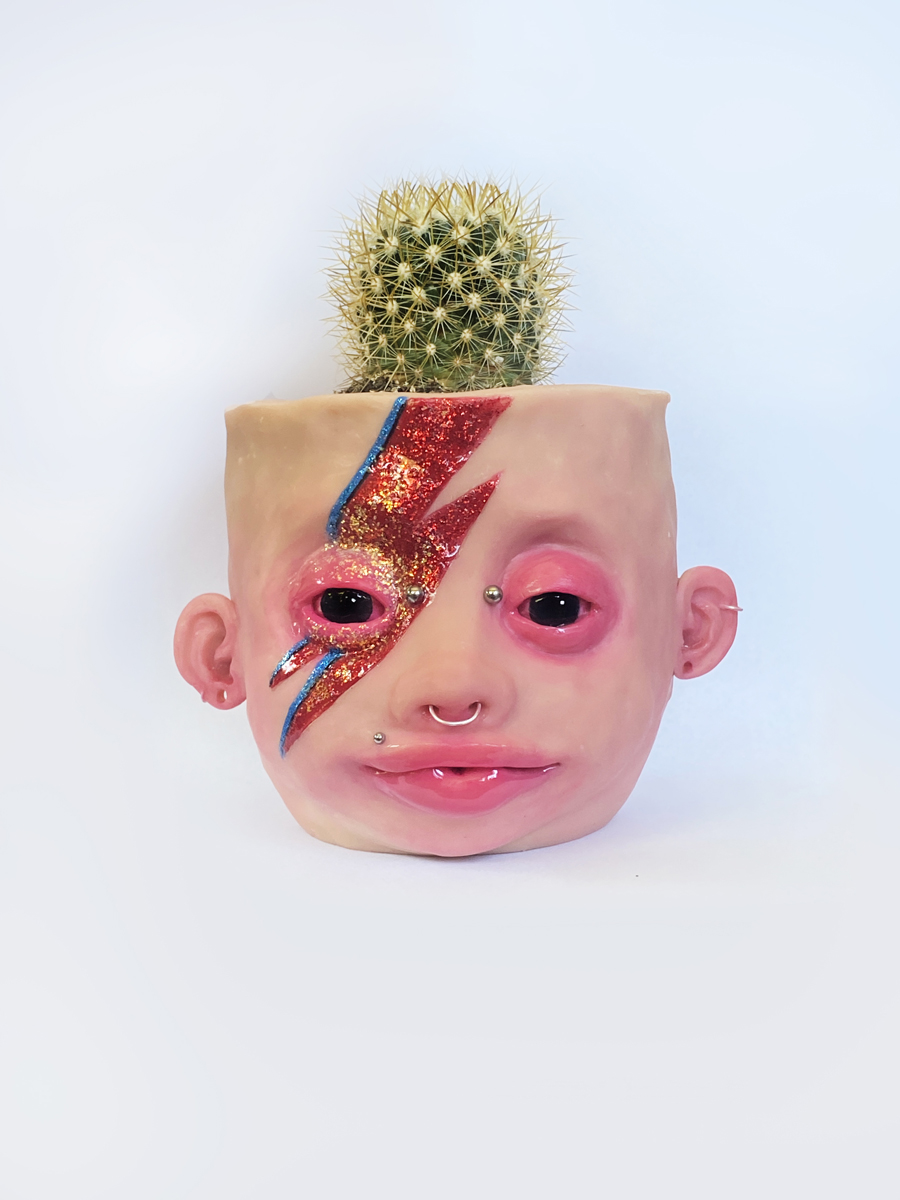