Being able to disconnect from the world is a necessary part of life, but it’s easier to lose touch with reality as it becomes the norm. Since the pandemic began, isolation has mostly been mandatory, and in turn, exacerbates our overreliance on technology to maintain connection and a sense of belonging. Responding to these themes is Schoeni Projects’ group exhibition disCONNECT. 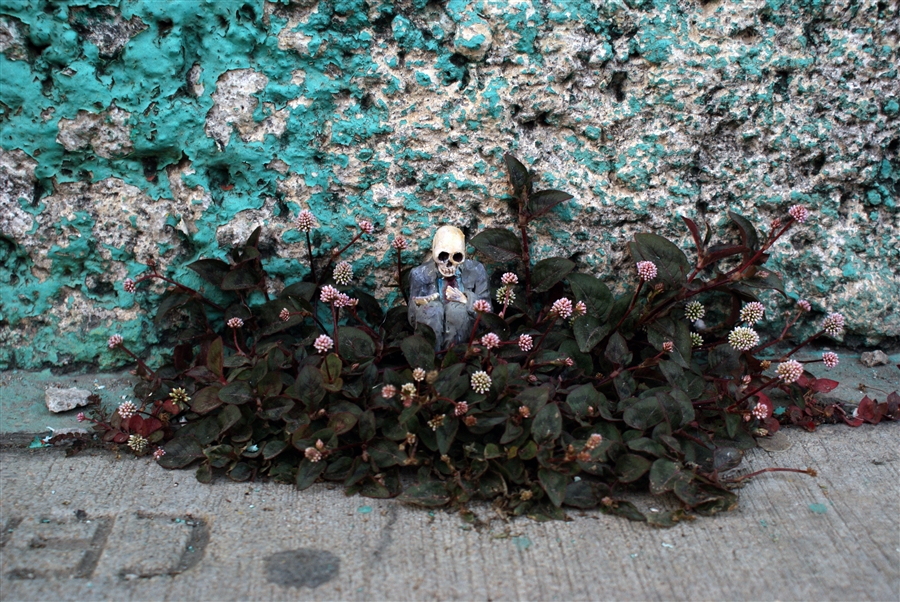 One of the participating artists, Isaac Cordal, began making small-scale sculptures in 2006 as part of his ongoing series, Cement Eclipses. The project explores our diminishing relationship with nature by critically defining the collateral effects of our evolution. Today, these micro men continue to tell their life-sized stories.

Far from conceptual, Cordal takes direct aim at small-mindedness and monumental egos with his human figurines, typically measuring around 25 cm tall. Using silicone moulds to multiply the same model, he manufactures a “prototype that represents a collective identity.” It’s only right that these minikins belong to the public; from rooftops to rubble and beaches to puddles, their placement is paramount when it comes to providing context.

Despite their short stature, Cordal’s art speaks to global issues that include environmental degradation, the collapse of capitalism, the impedance of technological advancement, and the ensuing effects of isolation. 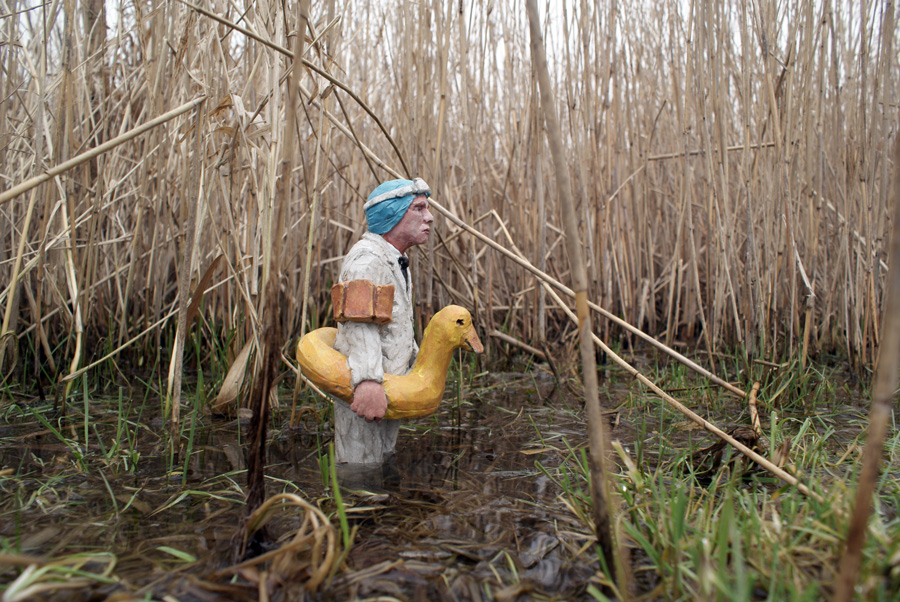 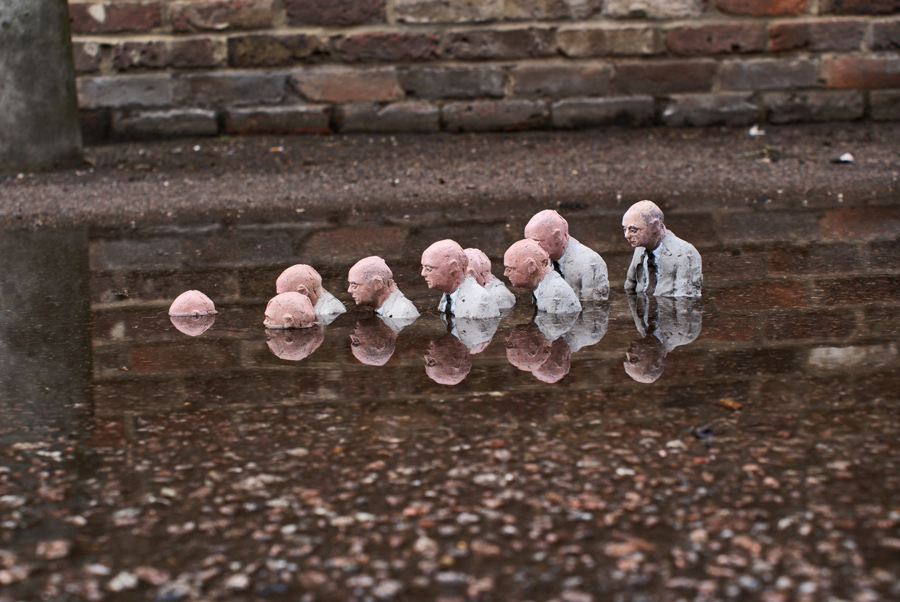 Although the proposal for disCONNECT came before the pandemic, being in lockdown hugely influenced its creation. In conversation with Brad Evans from the Los Angeles Review of Books, Cordal shared his thoughts on the matter:

“Even if we protect ourselves with a mask, the pandemic has unmasked us. The reality is that we continue to observe the world from the entrance of a cave, and nature is the one who dictates the rules. The pandemic shows the fragility and vulnerability of human beings. In a way, we can see it as a wake-up call to our arrogance as a species…” 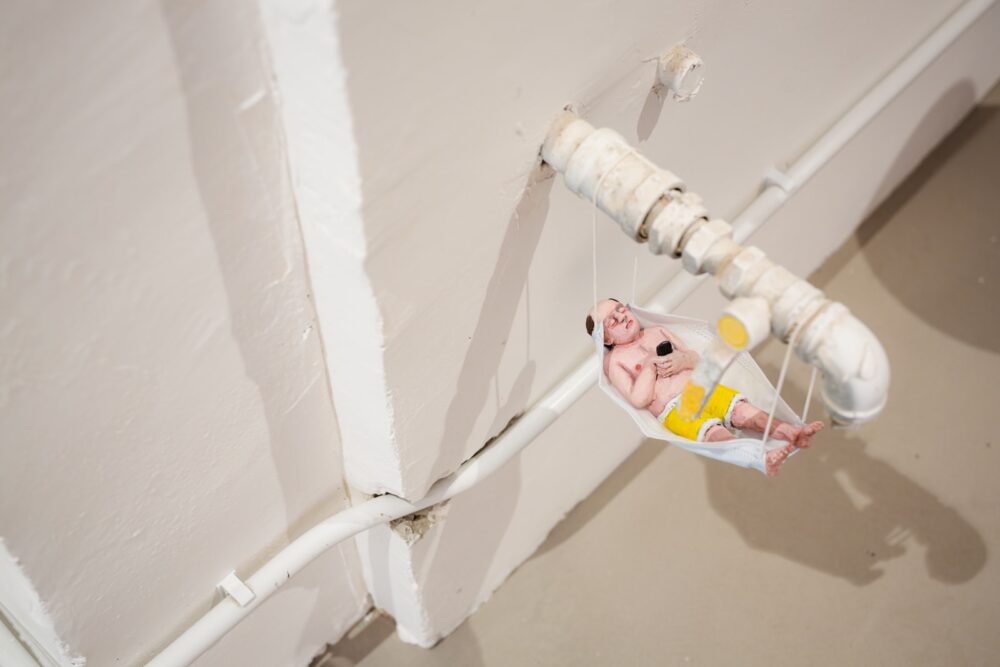 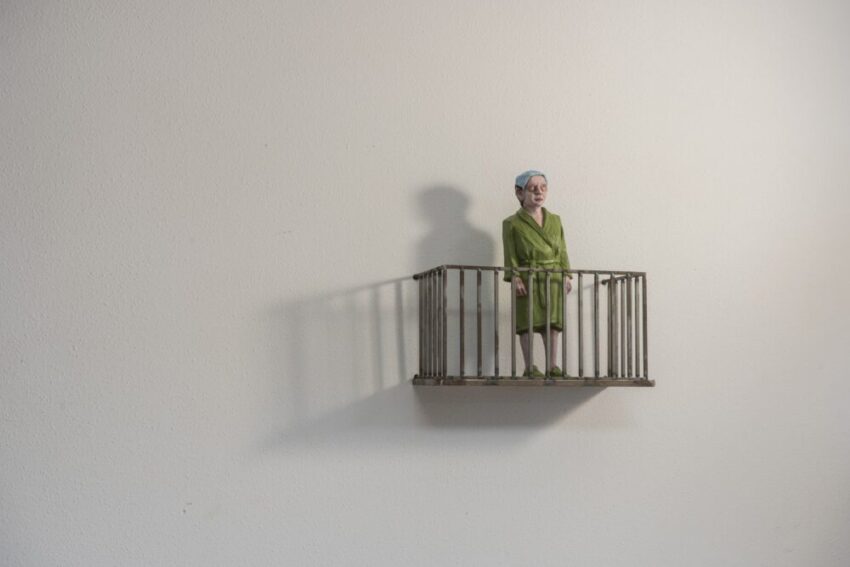 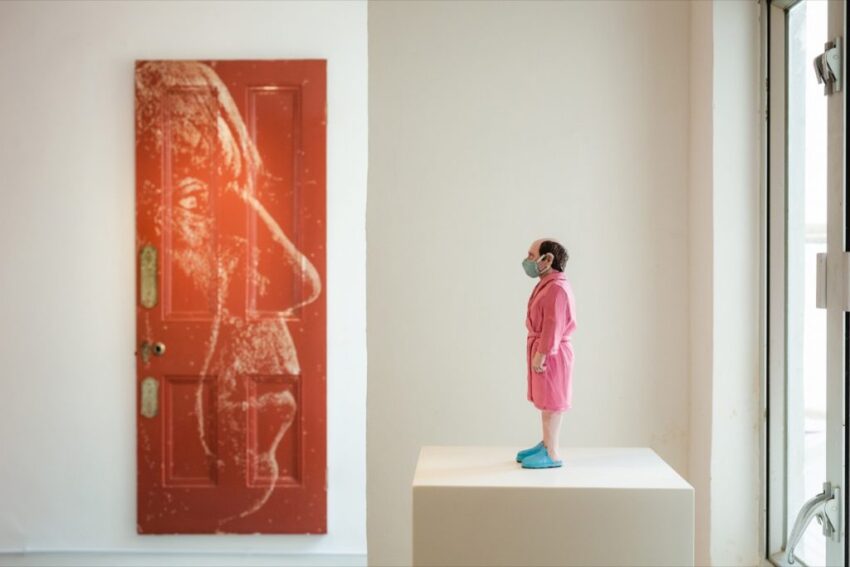 Enter the Epicureans, resting easy in disposable face mask hammocks while indulging in one of the finer things in life — a smartphone.

The Homies, dressed in a robe and slippers, keep their eyes wide shut whether they’re on the phone, perched on a balcony, or confined to a bell jar. They only know how to wear a mask correctly half of the time. 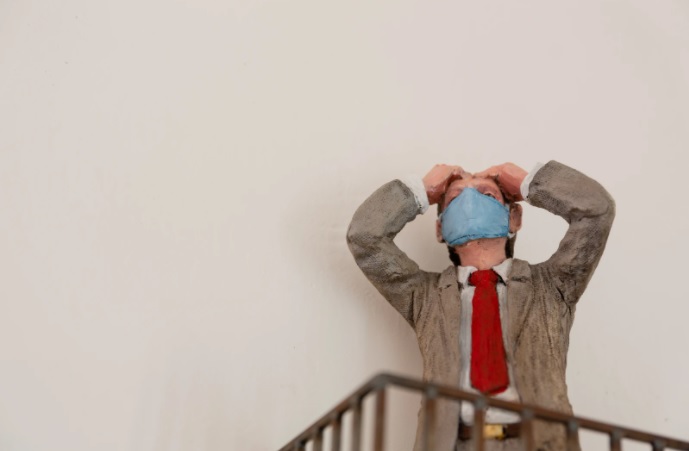 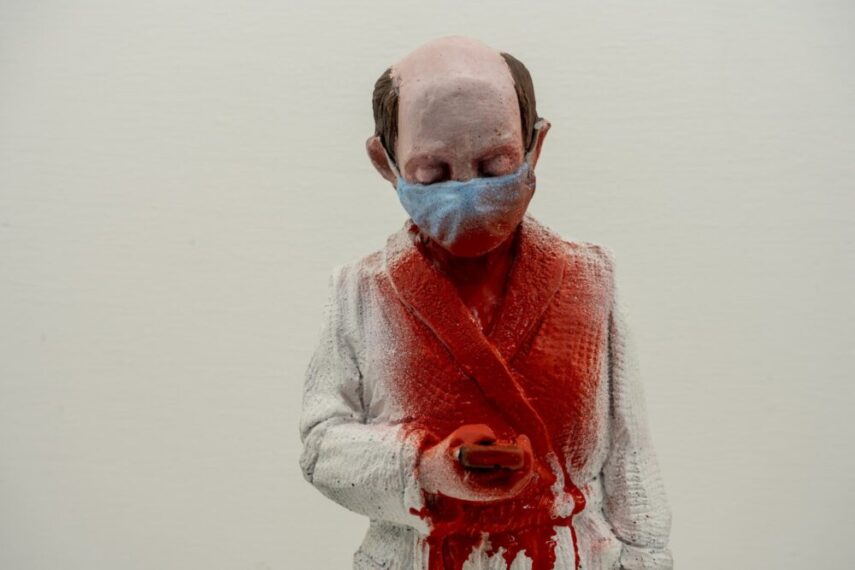 In Isolated, a businessman joins the Homies on the balcony. He holds his hands to his head in disbelief. You can almost hear him saying, “I can’t believe this is happening to me.”

The robed man returns in News of the Day, this time, covered in blood spatter that is somehow not eye-opening enough; he is immune to everything raging outside of his glass bubble.

In Panopticon, a birdcage mimics the layout of a prison cell, in which an inmate can be observed at any time without them knowing. 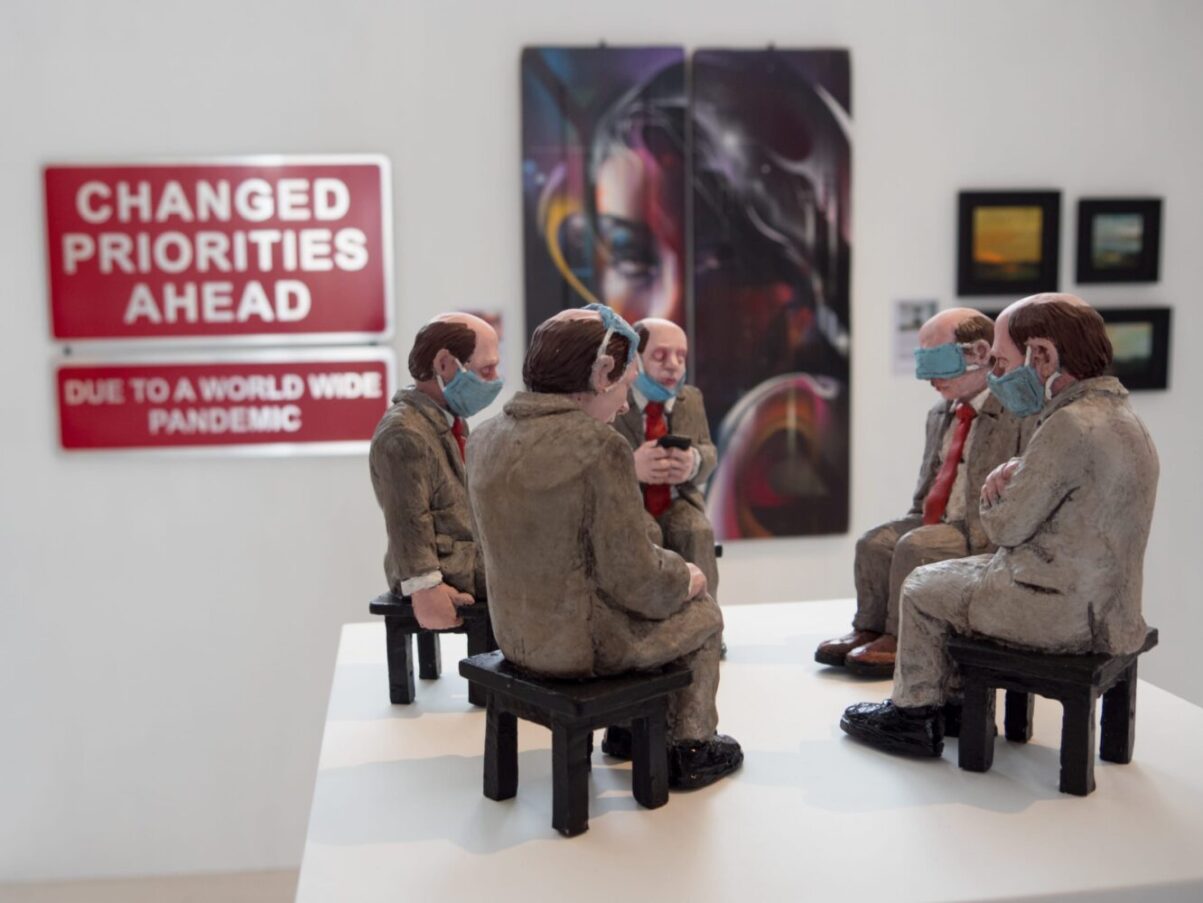 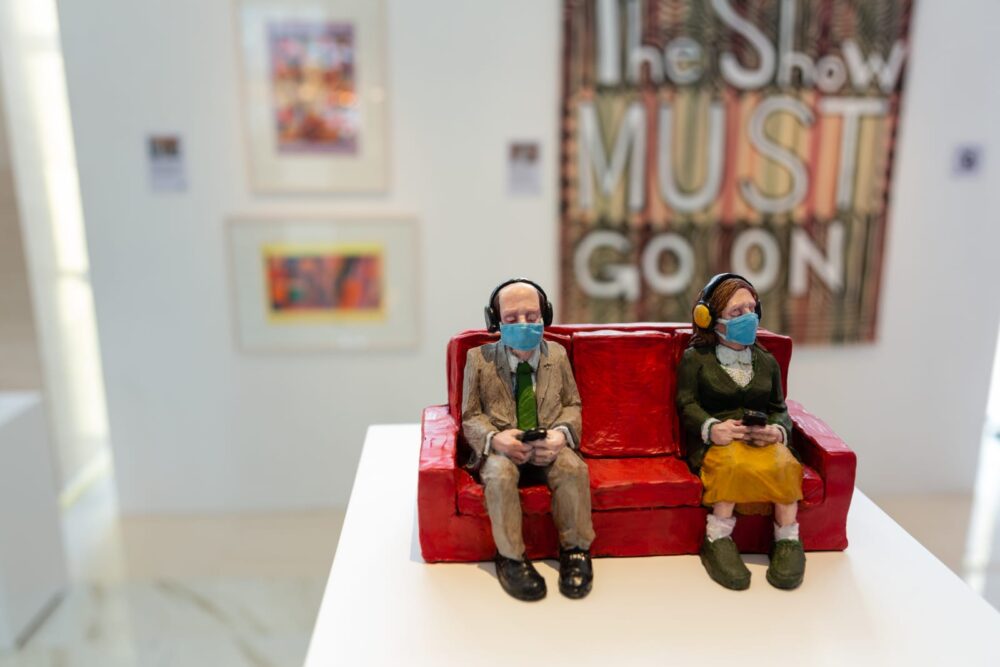 Shelter sees five suits arranged in a circle, one bored; one napping; one on their phone, and two addicted to hand sanitizer. Interesting, considering that more than half of the group didn’t get the mask memo.

Sitting together on a couch, but still miles apart, a man and a woman can’t see with their eyes closed; they don’t hear because their headphones are in and don’t speak because their masks are on. They’ve been social distancing since 2003.

In each scene, Isaac Cordal makes a case for what it means to be willfully blind. While his artful miniaturization is an important reminder of how small we are in the universe, it also realizes the oblivion that we feel towards the enormity of our footprint.

next
The Proud Youth by Chen Wenling
prev
Goodnight Mommy