On the 31st anniversary of Salvador Dalí’s death, I take a look back at one of his most recognizable works: The Persistence of Memory.

Painted in 1931 at the height of Surrealism, The Persistence of Memory is the poster child for an art movement that defied logic. It makes sense then that such an integral piece of art history measures 9 1/2 x 13″. Despite its small size, there is a lot of ground to cover.

Scattered across the composition are three melting clocks or ‘soft watches.’ Each clock has gone limp, draped over an olive tree branch, an anthropomorphic figure, and sliding off of a platform, except for one pocket watch that’s lying face down. Together, they may be corresponding to the past, present, future and the passage of time from an inconsequential objective standpoint.

It is of popular opinion that the melting clocks are related to Albert Einstein’s general theory of relativity, exploring time as a social construct rather than a fixed one. Dalí, like any good Surrealist, was concerned with metamorphosis and likened the melting clocks to the transformative power of dreams. This juxtaposition between hard and soft illustrates the “flexibility of time and the indivisibility of time and space.” Of course, it also fits to find an answer in the absurd; Dalí famously cited that the clocks were the “camembert of time,” in reference to cheese that had melted in the sun. 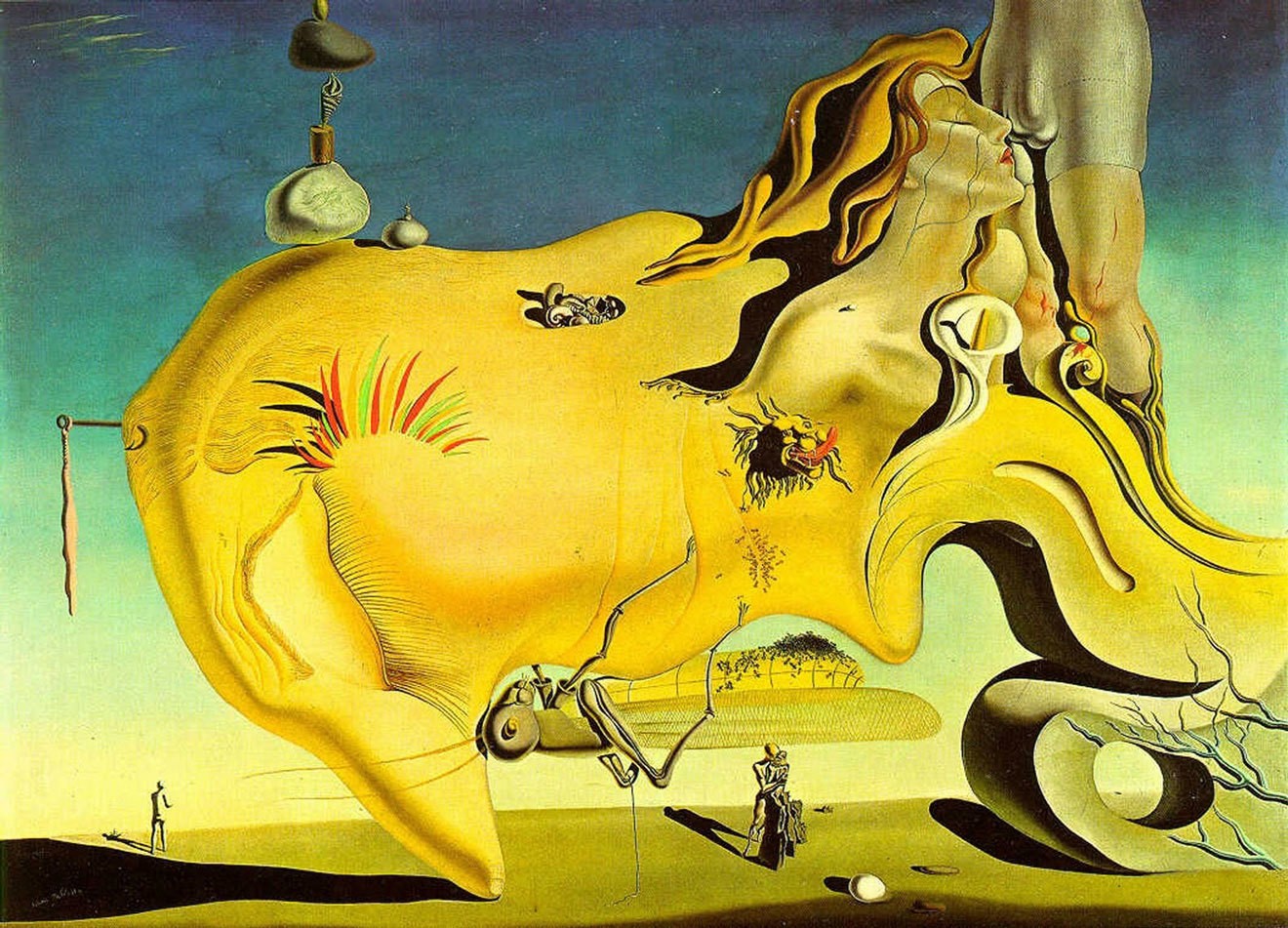 Adding to the scene is an anthropoid that is largely considered to be Dalí’s self-portrait. When you look closely, you’ll notice human facial features: a closed eye with eyelashes, a large nose and even a snail-like tongue. The fading figure appears to be dead or sleeping, again signifying some metamorphosis. By placing himself in the center, it is contended that Dalí was exploring his immortality and how he would be remembered; could he stand the test of time? 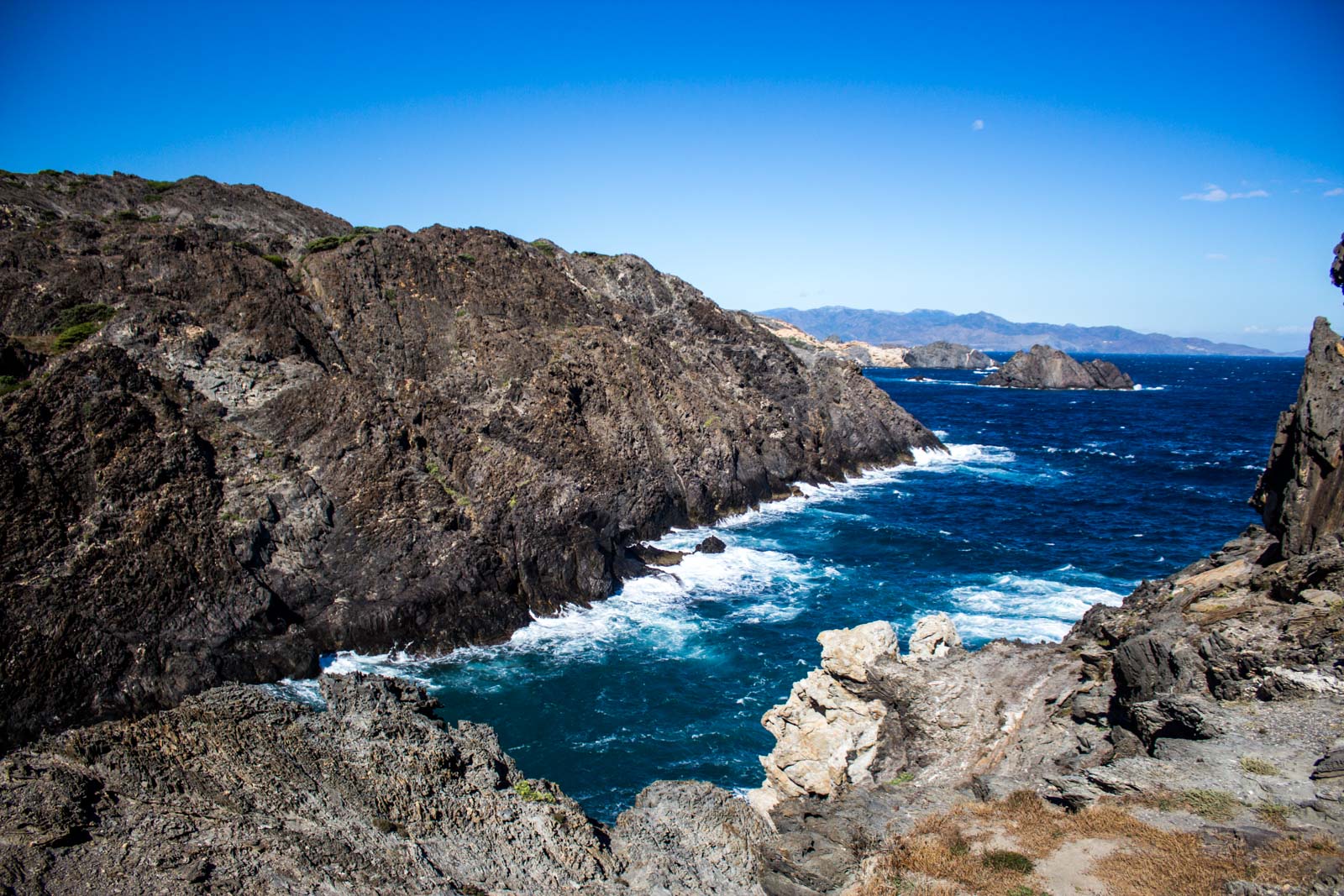 The Persistence of Memory combines a still-life with the autobiographical elements of a self-portrait and a landscape inspired by Cap de Creus’s coastal cliffs in Dalí’s native Catalonia, Spain (pictured above).

And if irony is a benchmark for Surrealism, you can think of the steps in terms of a monument — one of its primary functions being to commemorate a person or event, to preserve its memory. Only the memorial that Dalí has built is not very grand, so what exactly is there to remember about something so forgettable? 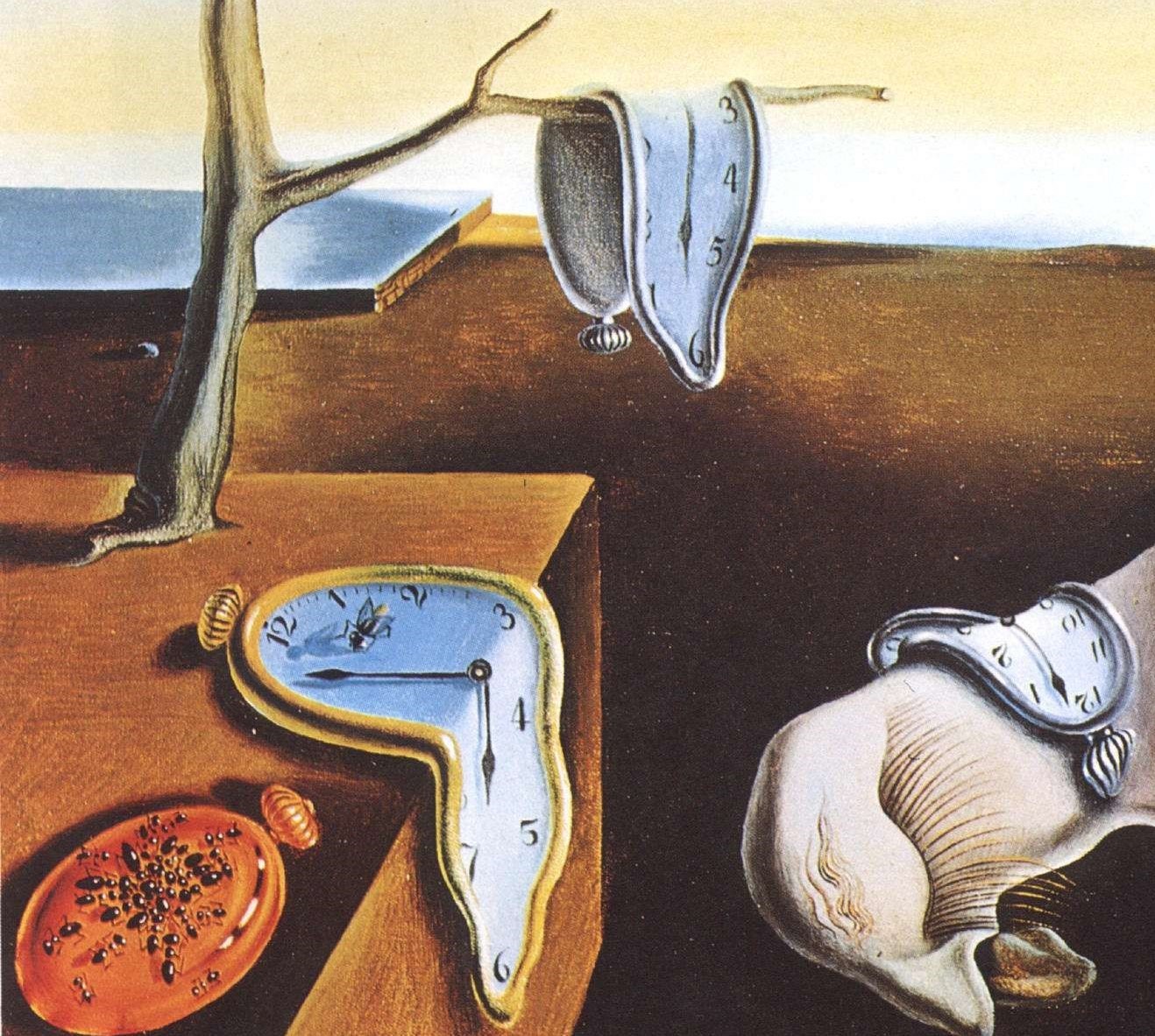 Dalí visits death and decay in The Persistence of Memory via insects. The congregation of ants on the pocket watch are killing time while their neighbour to the left, a single fly that casts a human shadow on one of the melting clocks, hints that the painter may be trying to escape from reality. After WW1, during the Great Depression and on the precipice of not only the Spanish Civil War but the Second World War, it’s safe to say there was widespread unrest. This gives context to the dead olive tree, implying the absence of peace, hope and healing. 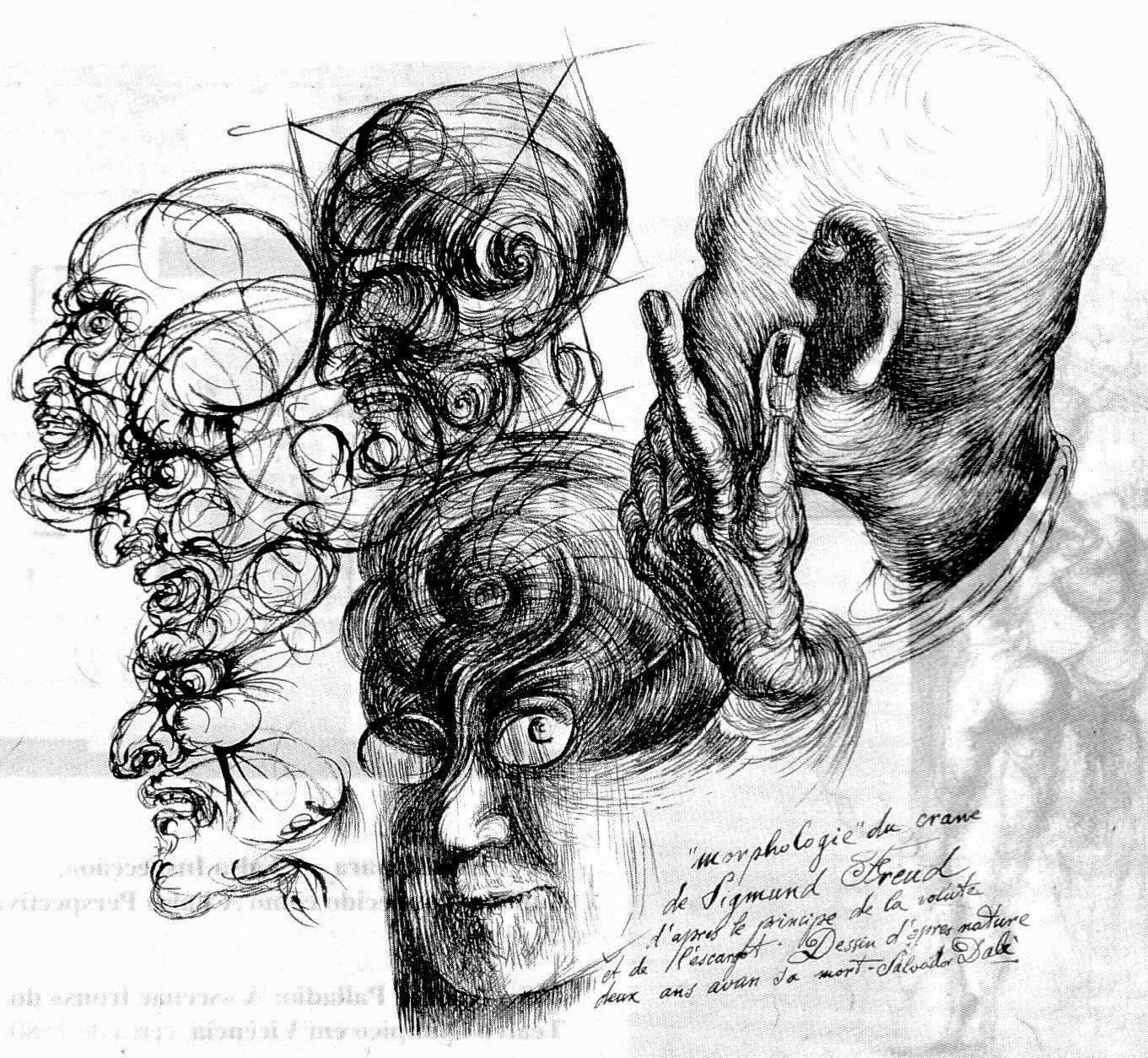 Morphology of Skull of Sigmund Freud (1938)

Taking after Freud, the Surrealists believed that the powerhouse of the mind was the subconscious and therein dreams that reveal coded messages. Dalí was especially freed by this mindset: “Surrealism is destructive, but it destroys only what it considers to be shackles limiting our vision.” In 1930, he began self-inducing paranoia and hallucinations, all in the name of art. Dalí’s paranoiac-critical method birthed “hand-painted dream photographs” where parts of the real world became entangled with the irrational. “I am the first to be surprised and often terrified by the images I see appear upon my canvas,” Dalí wrote, “I register without choice and with all possible exactitude the dictates of my subconscious, my dreams.” 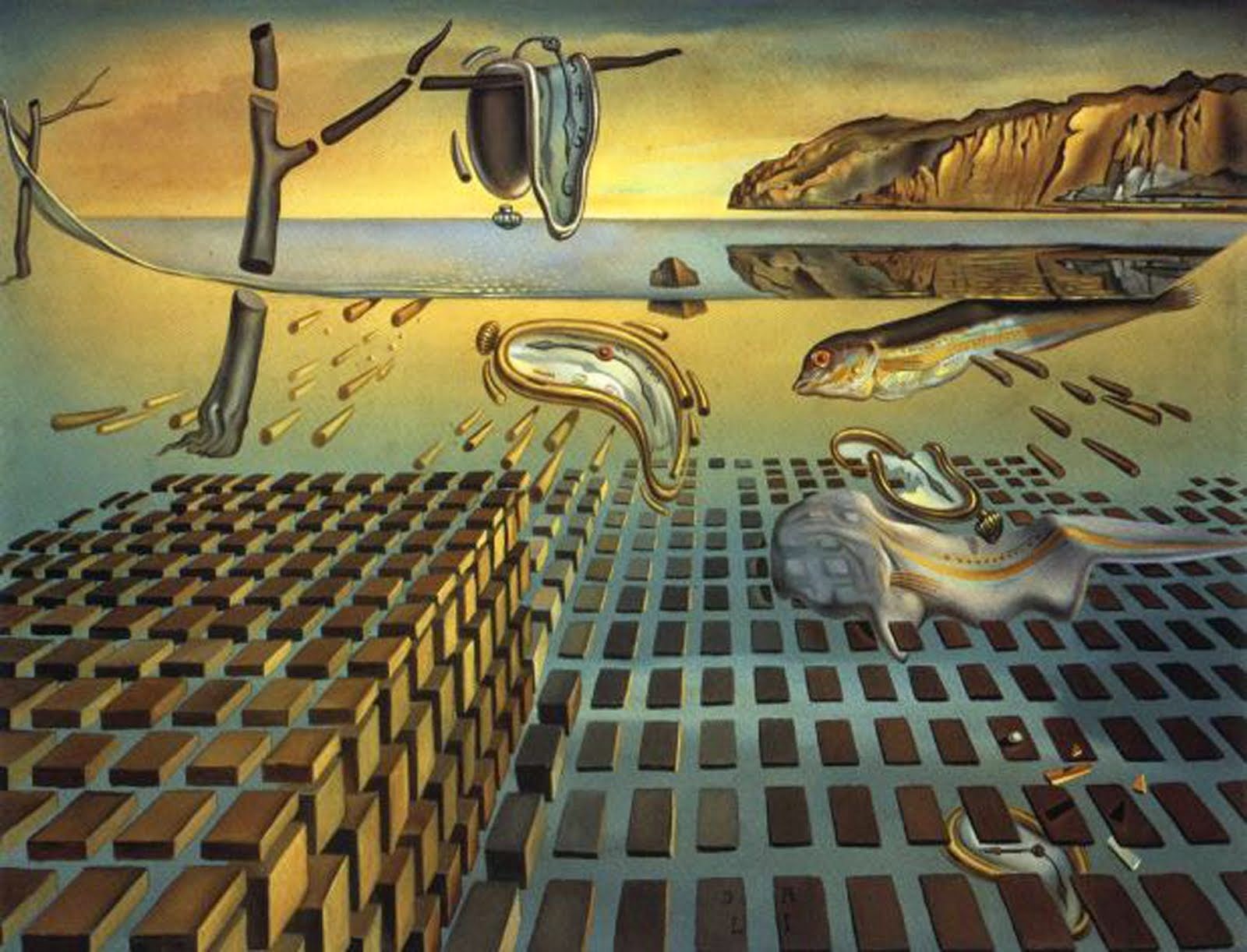 In 1954, twenty-three years after its inception, The Persistence of Memory got a sequel: The Disintegration of the Persistence of Memory. This version shows the original landscape flooded with water while the foreground is separated into grid blocks. The melting clocks, the tree and the semblance of a self-portrait remain, but the timepiece and the insects are missing. In their place are an extra clock, a fish and a barrage of what looks like bullets.

Dalí explained this paradigm shift between paintings: “In the surrealist period, I wanted to create the iconography of the interior world—the world of the marvellous, of my father Freud. I succeeded in doing it”, he mused, “Today the exterior world—that of physics—has transcended the one of psychology. My father today is [theoretical physicist] Dr. Heisenberg.”

The Persistence of Memory has such an enduring quality because it’s something that everyone can connect to. When you’re having fun, time flies; when you beat the clock, there is time to kill, and when you dream, time goes on.