Gustav Klimt (b.1862), a co-founder of the Vienna Succession, served an important role in bridging academic realism and the coming world of abstraction. One of his most notable figurative works, Death and Life (1908), saw five exhibitions before its completion in 1915. While its subject matter is timeless and universal, it is just as elusive. If you want to understand Klimt better, the best way, he said, is to “look attentively at my pictures and there seek to recognise what I am and what I want.” So, here’s looking at you, Klimt.

The right side of the composition is very much giving life cuddled up in what feels like a warm patchwork quilt. As a practice, quilting is akin to the family institution, making it plausible that the group of nine is related. The quilt itself features a quintessentially Klimt mosaic pattern, enlivened with inspiration drawn from looking at cell structures under a microscope – the oval shapes correspond to the ova and the rectangular shapes to sperm. 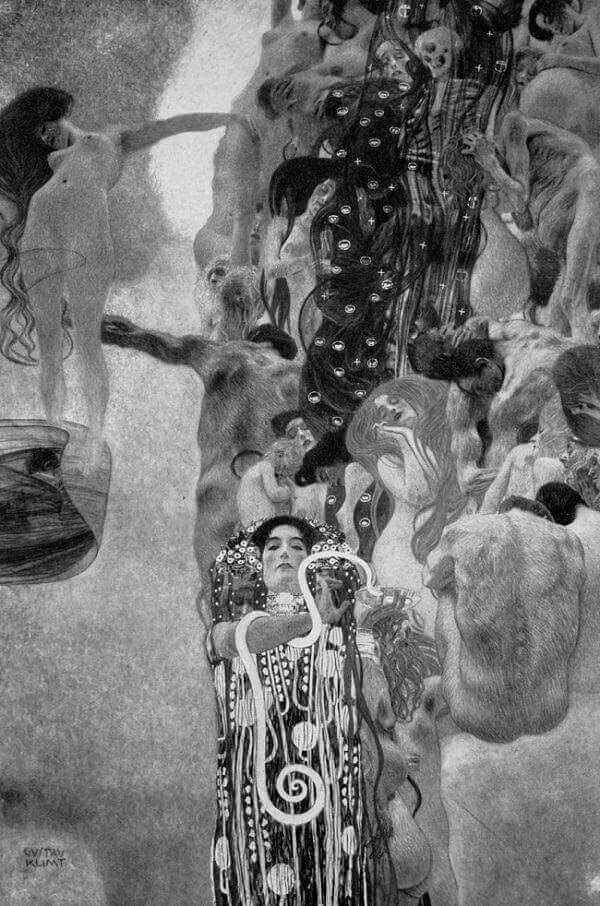 Reflecting various attitudes toward death are an insular bunch ranging from infancy to senescence. The woman with dark curly hair and the two children swimming to her right appear serene while the man in the middle comforts his grieving wife and shoulders the burden of loss. Above them is an elderly woman in a blue headscarf bowed in solemnity. The baby is incarnate of naivety about death, but the crazed girl on the left has one eye on him, showing her curiosity. Below her, another girl looks as though she’s clinging to life. They’re both restless with the knowledge that they can’t stay here forever, in contrast to the other heads in the clouds.

The delicate nature of this formation comprises a pale blue, almost translucent skin tone that stands out against the vitality of rose-coloured cheeks. The majority of shut eyes suggest that they’re either sleeping or dreaming. This detail is interesting considering that Klimt was a fan of Freud’s work, including The Interpretation of Dreams (1899). Is this a dreamscape, perhaps? Is it Klimt’s unconscious trying to process the fear of death? 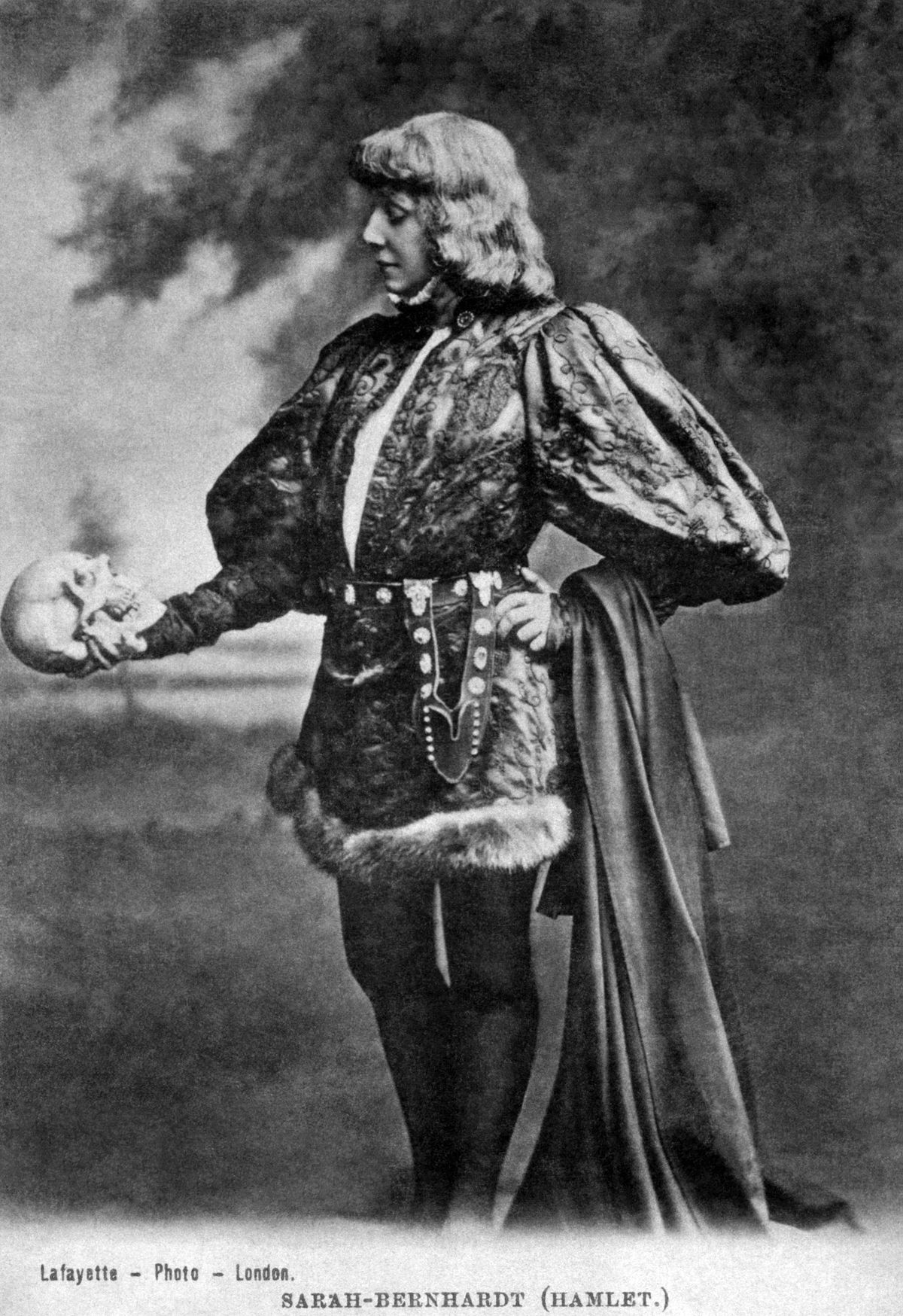 Death and Life also implicate Freud’s ‘death drive,’ which identified the motivators of the human psyche as Eros (the sexual instinct for the continuation of life) and Thanatos (the death instinct for ending the anxieties of life). Shakespeare’s Hamlet famously illustrates the direct tension between the two states, most pointedly during the “To be or not to be” soliloquy. Musing on which is “nobler” life or death, Hamlet sees the latter as the most desirable, but the “rub” is that what comes after the “sleep of death” is unknown. Not knowing can be even scarier than living life in all its “slings and arrows of outrageous fortune” because this is at least something you can count on.

When it comes to thinking about what happens after we die, what we can’t see is the most frightening part. You want to believe that when someone you love passes away, they go up to heaven and join the rest of your family and friends on some big comfy couch in the sky, but in the back of your mind, you know there’s a chance that there is nothing. Here, Klimt gives us a glimmer of hope that such a reunion is possible.

To the left of the composition, you’ll find a grinning Grim Reaper clutching a club, patiently waiting for someone to join his side. Despite his absentee eyes, the depth of the eye socket is penetrating enough. Like an afterlife clergyman, he wears a long cool coloured cloak covered in crosses that at times look like window panes, fit for a voyeur. Among them are two small fractioned circles referring to life, death, and the afterworld as a package deal. In 1915, Death and Life slipped into something a little more sombre as Klimt painted grey over the gold leaf background. While the latter version is more abysmal, it signals an acceptance of mortality and the unknown, which Klimt’s impending death would confront three years later. 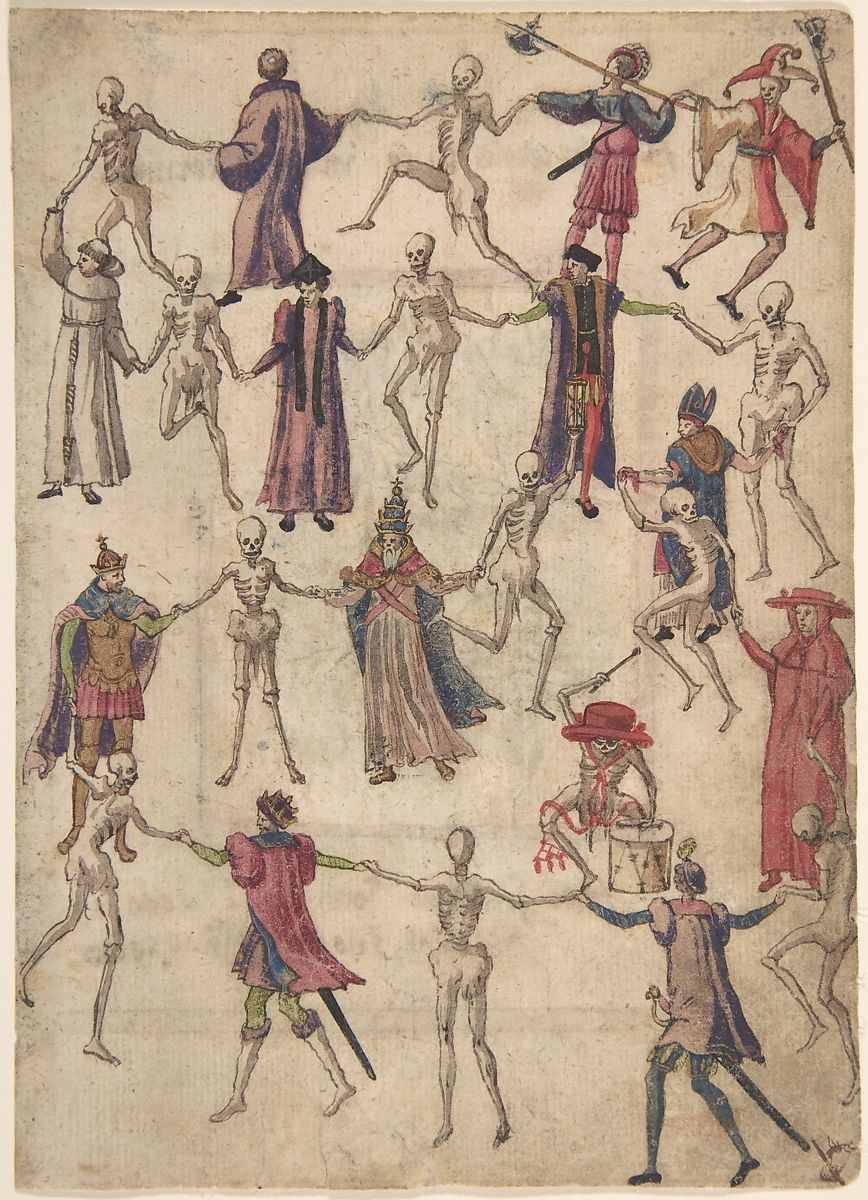 Notice that the title is “Death and Life,” not “Life and Death,” which is how the expression usually goes. This calls into question what comes first or if that even really matters. What we’re seeing could also be depicting reincarnation, and the ‘living’ group is just the same person reborn in a different body. Death, in a sense, is not the end but the beginning. Taking it a step further, Klimt breaks down Death and Life as two halves of the same whole to show us how they fit together like a puzzle piece or dance partner. Their eternal embrace is a memento mori – “remember that you must die,” but also, “remember that you must live.”