As a child, nightmares can be especially frightening, but as you grow older and look a little closer, you’ll see that bad dreams can be beautiful because they’ve been built to solve pain from the past. Such is the case for artist Lin HuiJing.

Born in rural China, Lin grew up in poverty but was always in high spirits, spending her days singing, dancing, playing dress-up, and writing stories. In second grade, she transferred from her village school to one of the top schools in the city. The move was hard on her, and the new environment brought with it academic pressure and bullying by her classmates. “I didn’t know how to protect myself, nor did I have any ability to fight back,” Lin says. Eventually, she returned to her old school, but her new self suffered from severe headaches, and her once lively temperament turned melancholic. 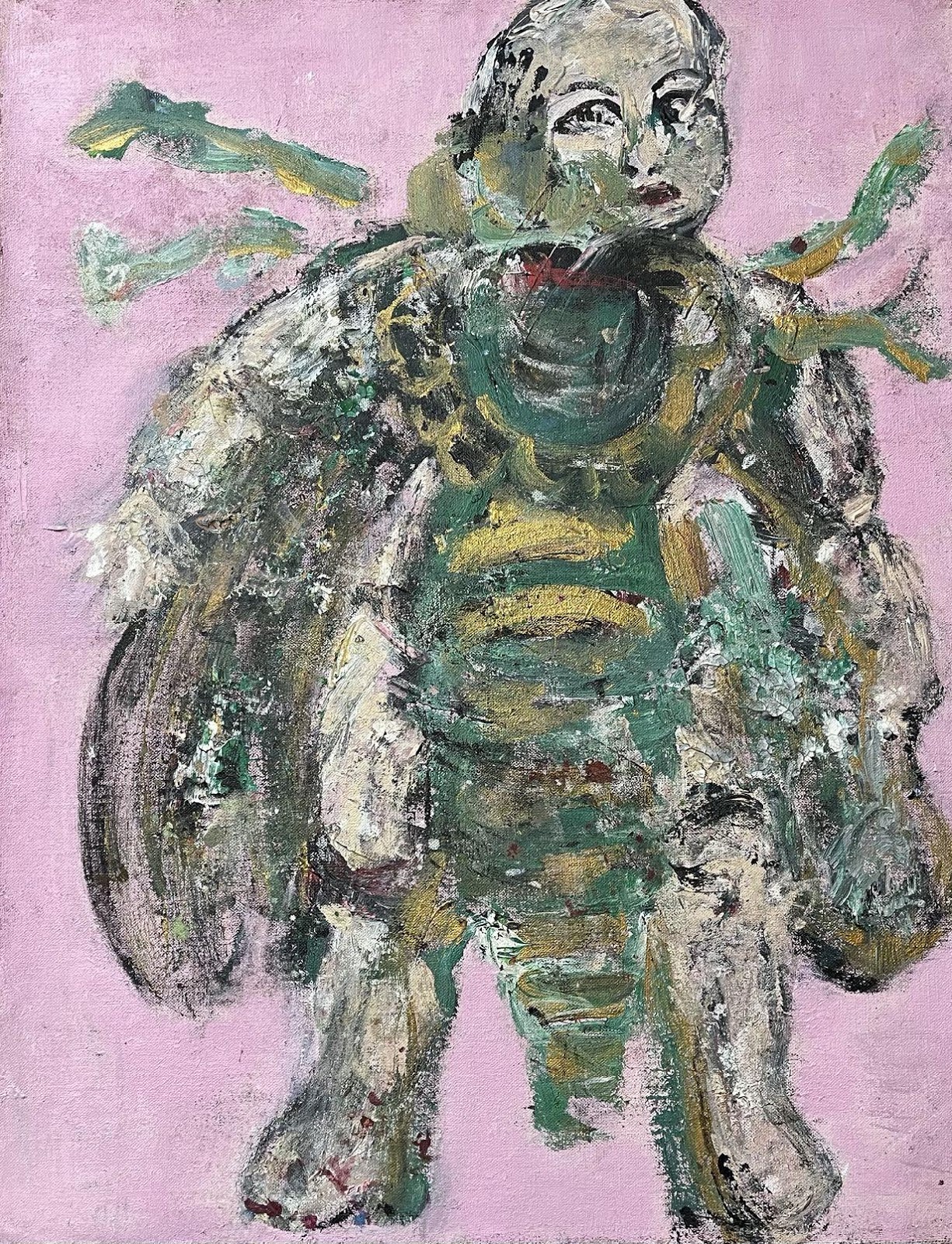 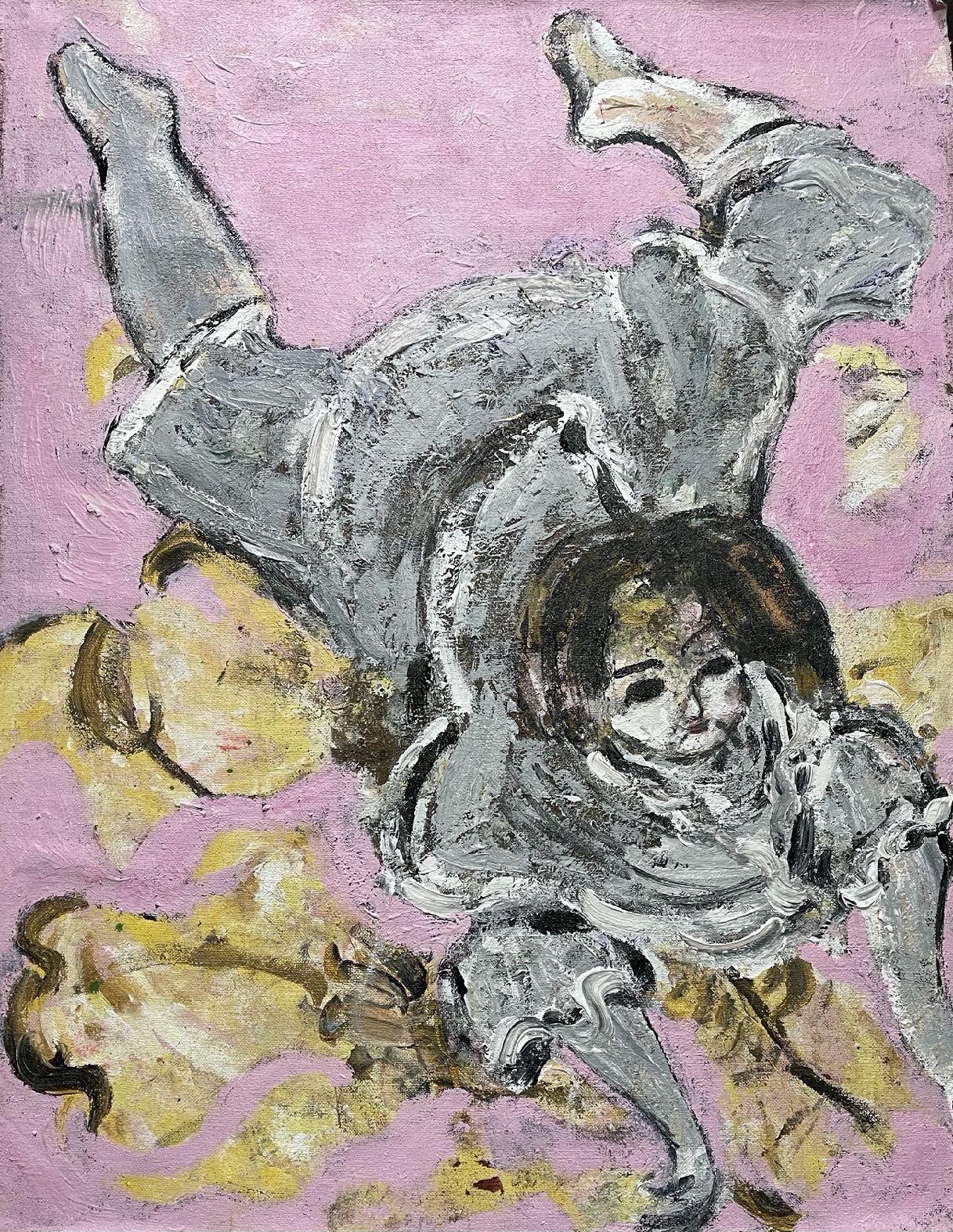 After high school, Lin studied abroad in London for her A-levels. One night, she got up to paint to distract herself from thinking about economics homework. Left feeling calm and clear-headed, she decided to apply to the Fashion Folio course at the London College of Fashion (LCF), followed by Central Saint Martins (CSM) Foundation Studies in Art and Design. Both taught Lin how to build a strong portfolio and prepared her for LCF’s BA in Womenswear, concentrating on the creative design process and patternmaking while strengthening her three-dimensional sense. However, after returning to Shanghai, finding a factory to work with proved difficult, and by Fall 2018, Lin’s fashion illustrations were lost on the computer. Even so, she continued to draw by hand and began embracing free painting techniques. 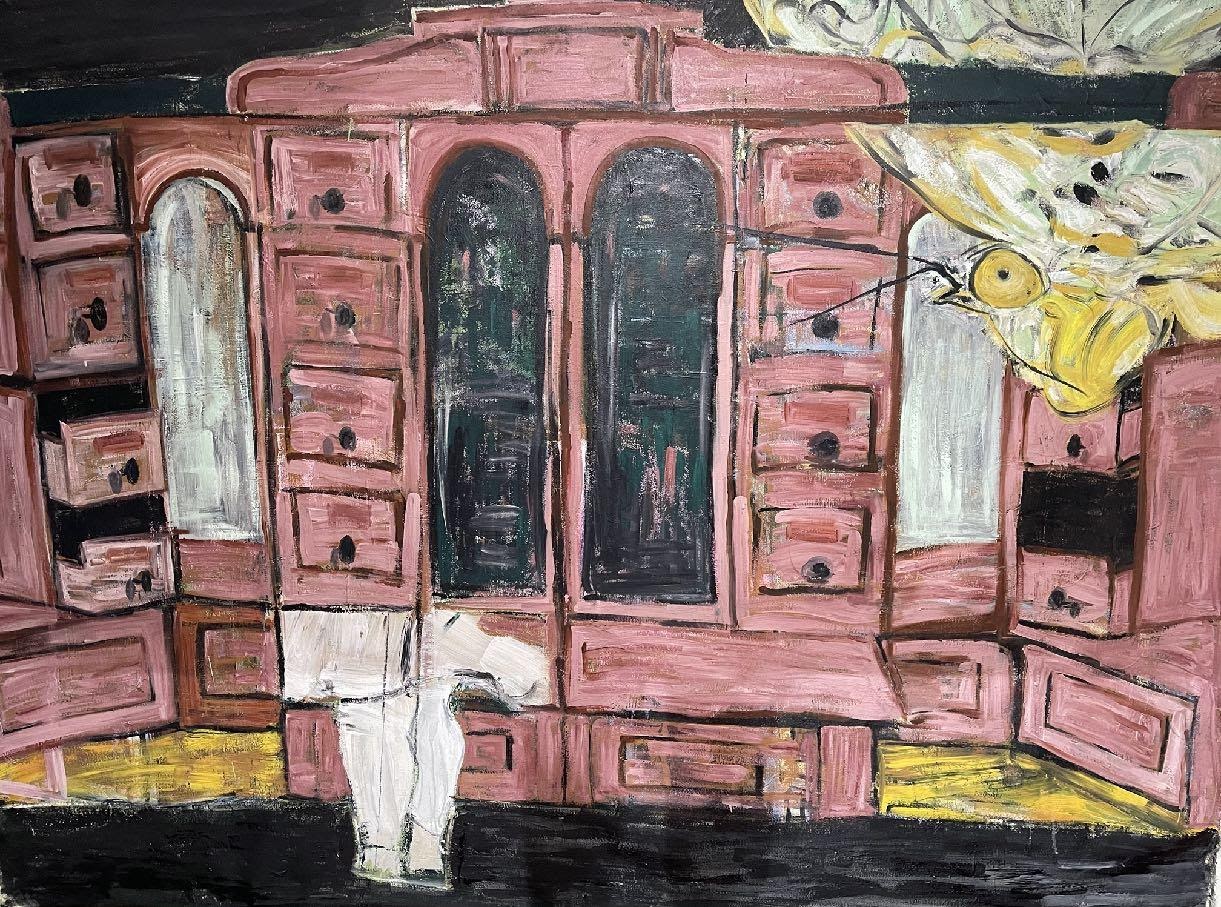 On the symbiotic relationship between fashion and art, Lin believes, “Art is everything and the accumulation of everything. For me, painting is a simple and mature process. Learning fashion design [improved my aesthetic vision] and helped me greatly in painting.” Enter Childhood Nightmares, Lin’s first solo exhibition running from May 1st to June 30th in Shanghai’s former French Concession. The project, referred to as “microcosm of the world’s nightmare,” took nine months to complete, starting last summer and coinciding with the pandemic. 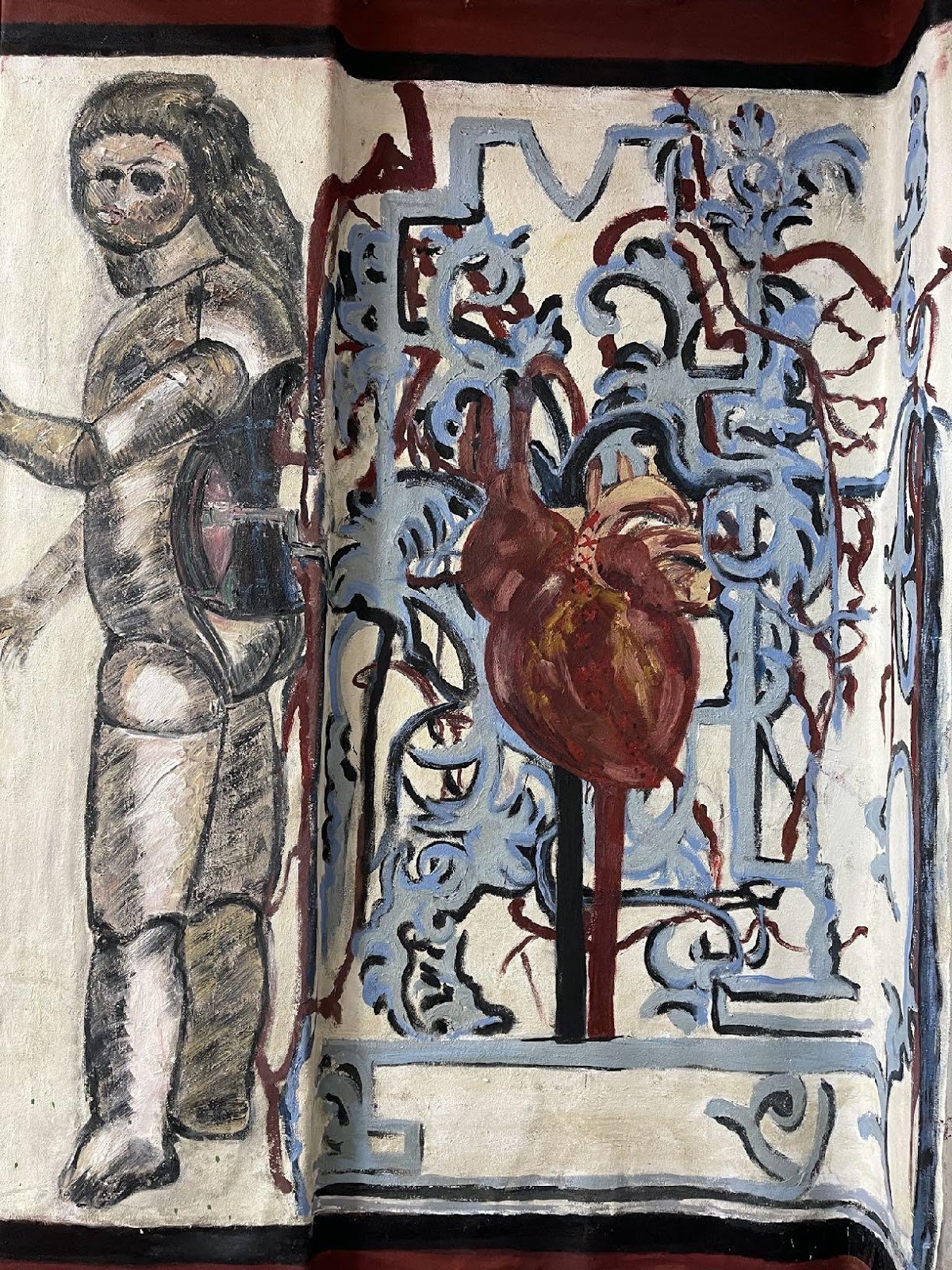 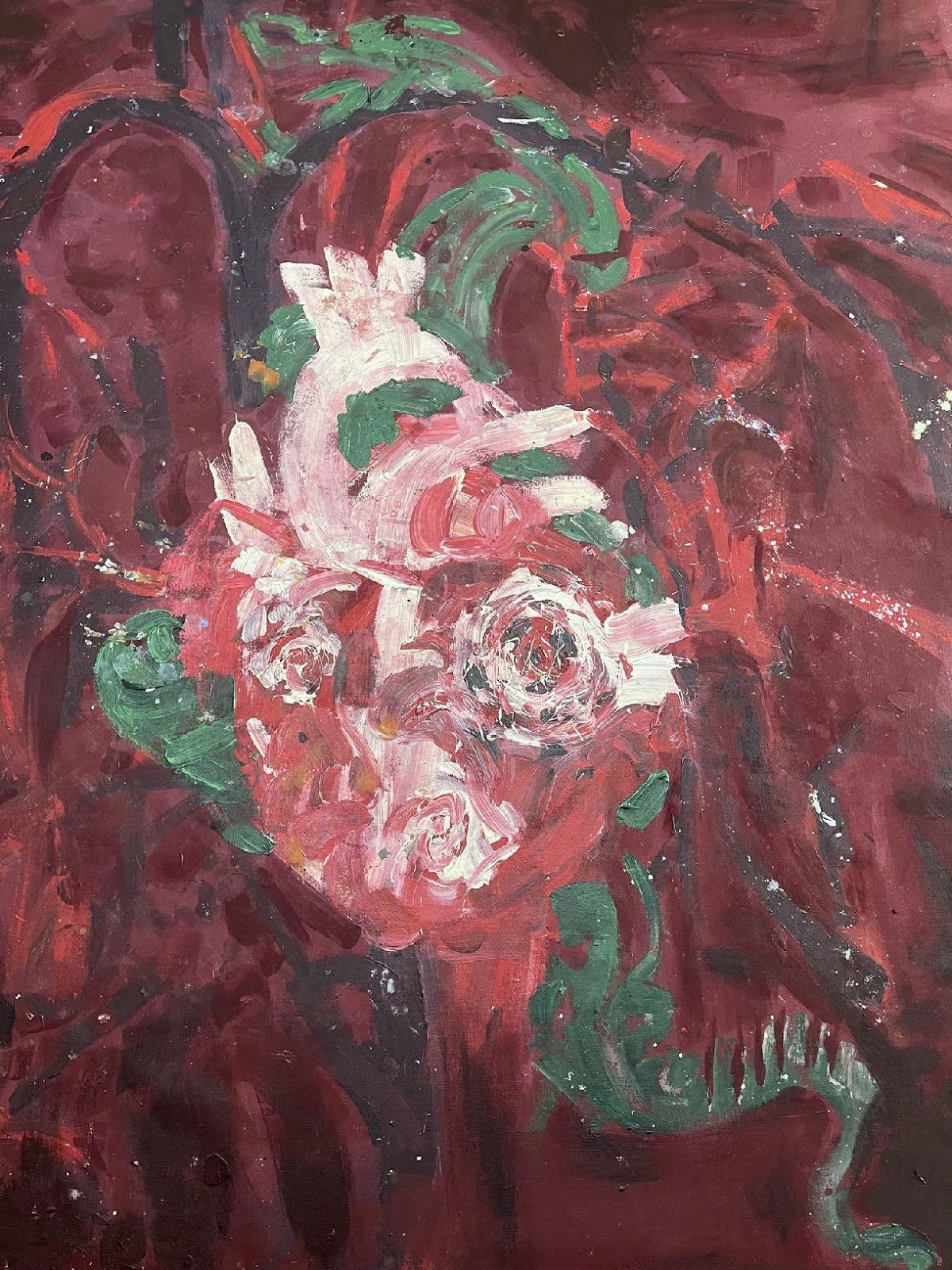 Ushering fashion into art with a focus on colour, texture and brushwork, Lin paints a picture inspired by her young adolescence and cross-cultural experience living in London. Victorian dolls with Gothic Lolita sensibilities reminiscent of Rei Kawakubo and Marc Jacobs populate the studio turned dollhouse. It’s a place where dark and light live side by side to create a world full of contrast; Lin compares the monochromatic bias to her way of life, which seeks coordination, balance and harmony. 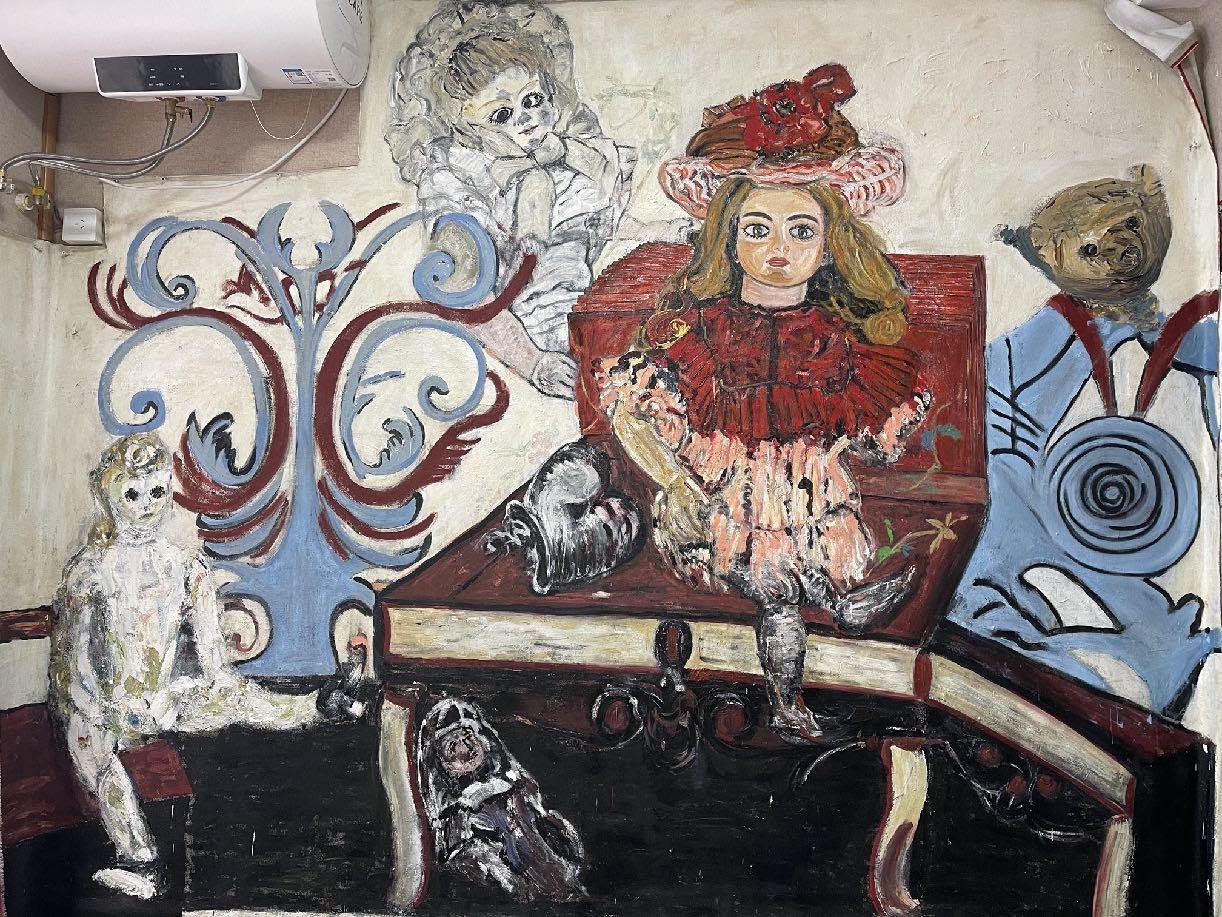 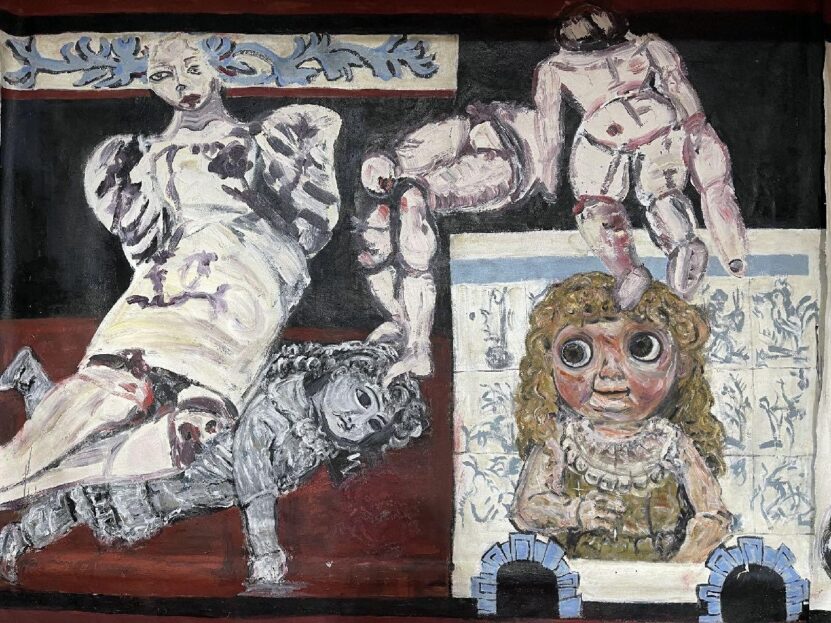 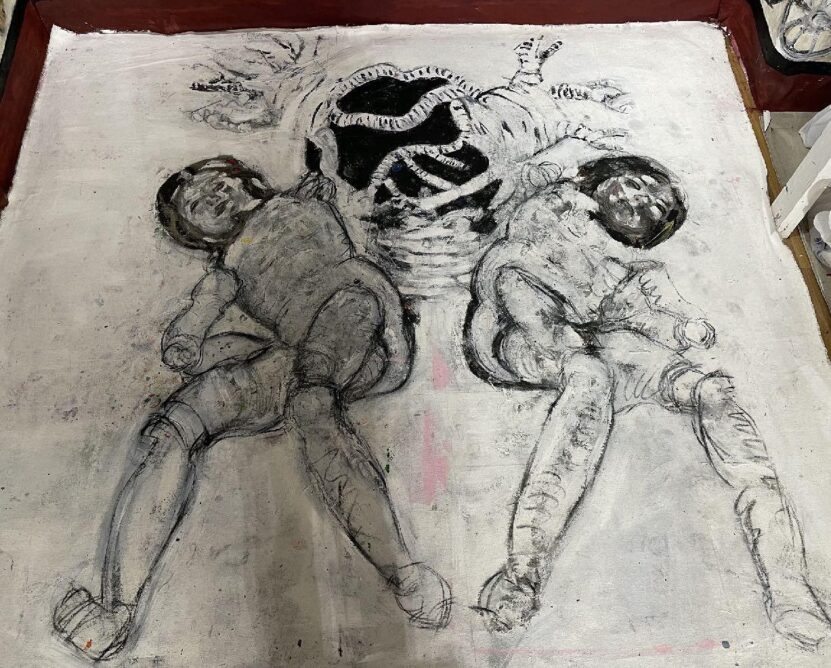 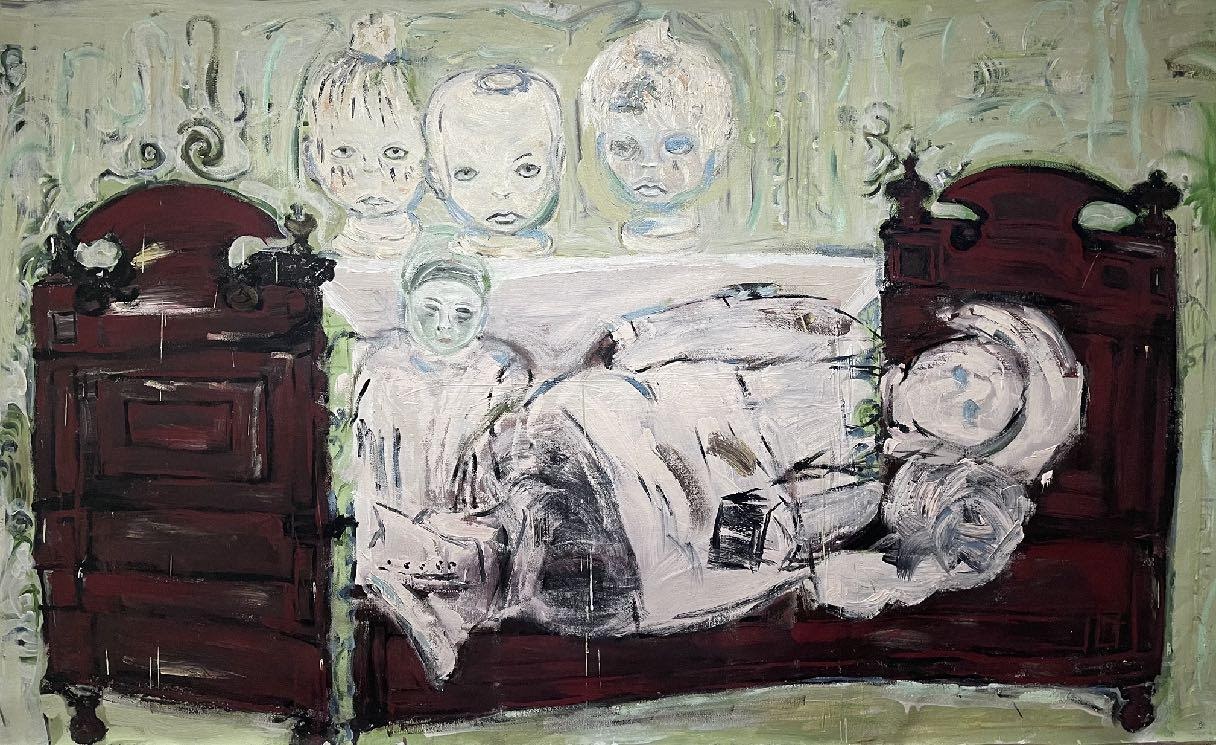 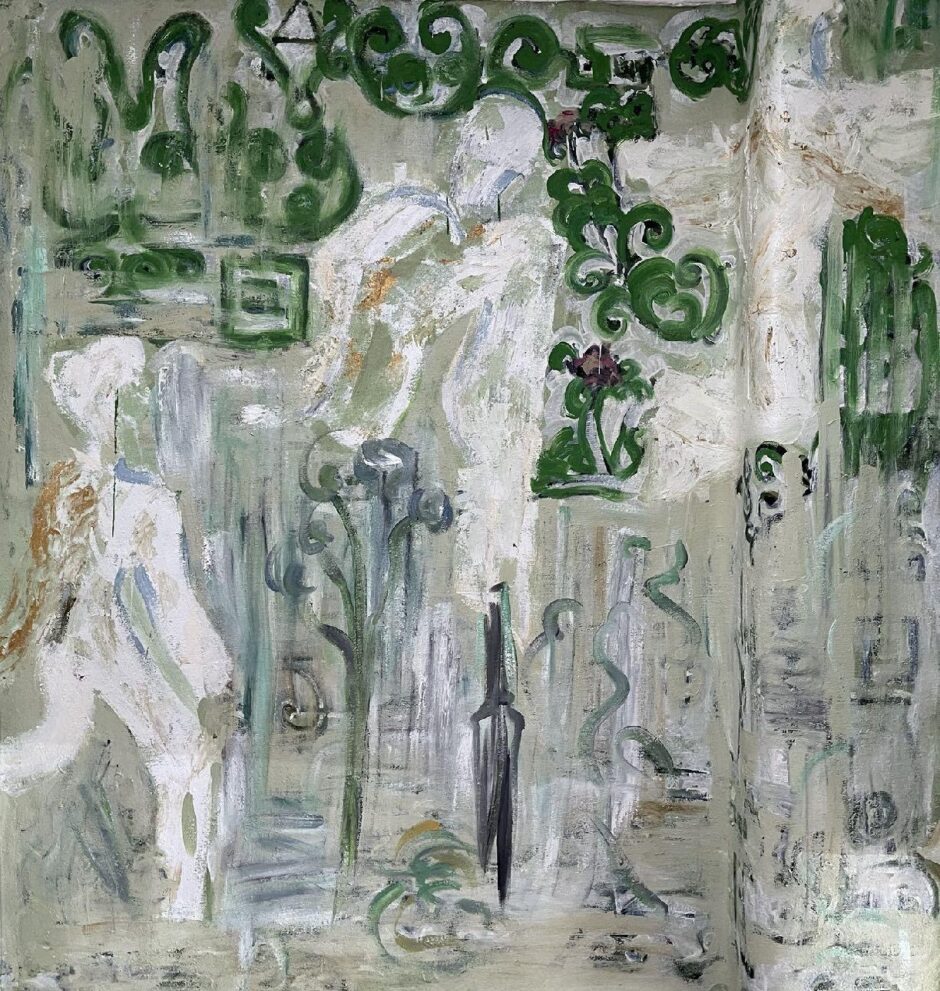 Nineteen large-scale paintings fill the walls of the venue to tell the whole story without interruption. It starts as a classic tale of “strong vs weak” with My Legs Won’t Walk Again. Then there is the trusty teddy bear companion to help get through tough times, seen in Music Box. The Baobabs, not far behind, references a type of tree that, in the context of the book, The Little Prince, symbolizes the obstacles in life that will strangle you if left unattended. In Three Wishes, Lin recounts her struggles to an imaginary psychiatrist, and later, Finding Neverland marks the growth of a perennial garden filled with roses. 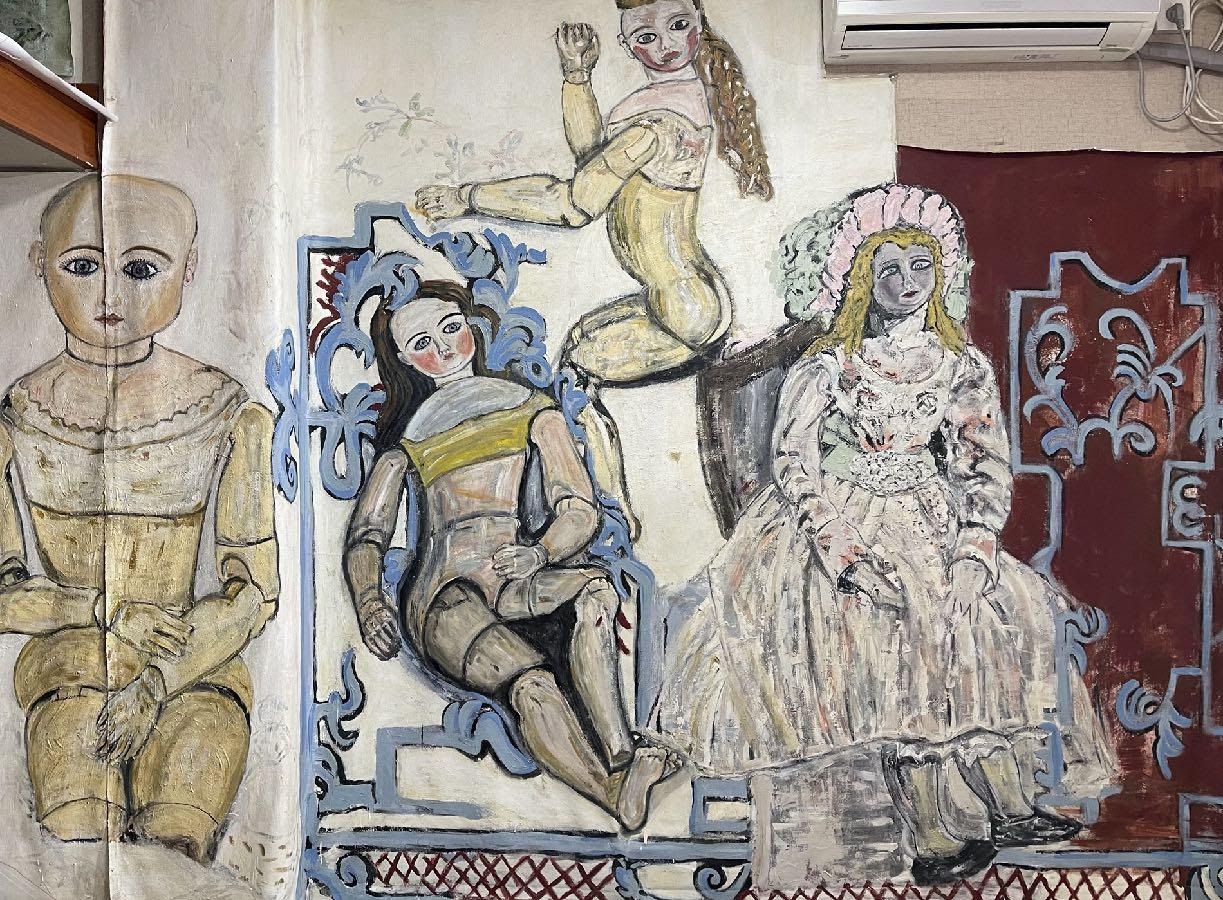 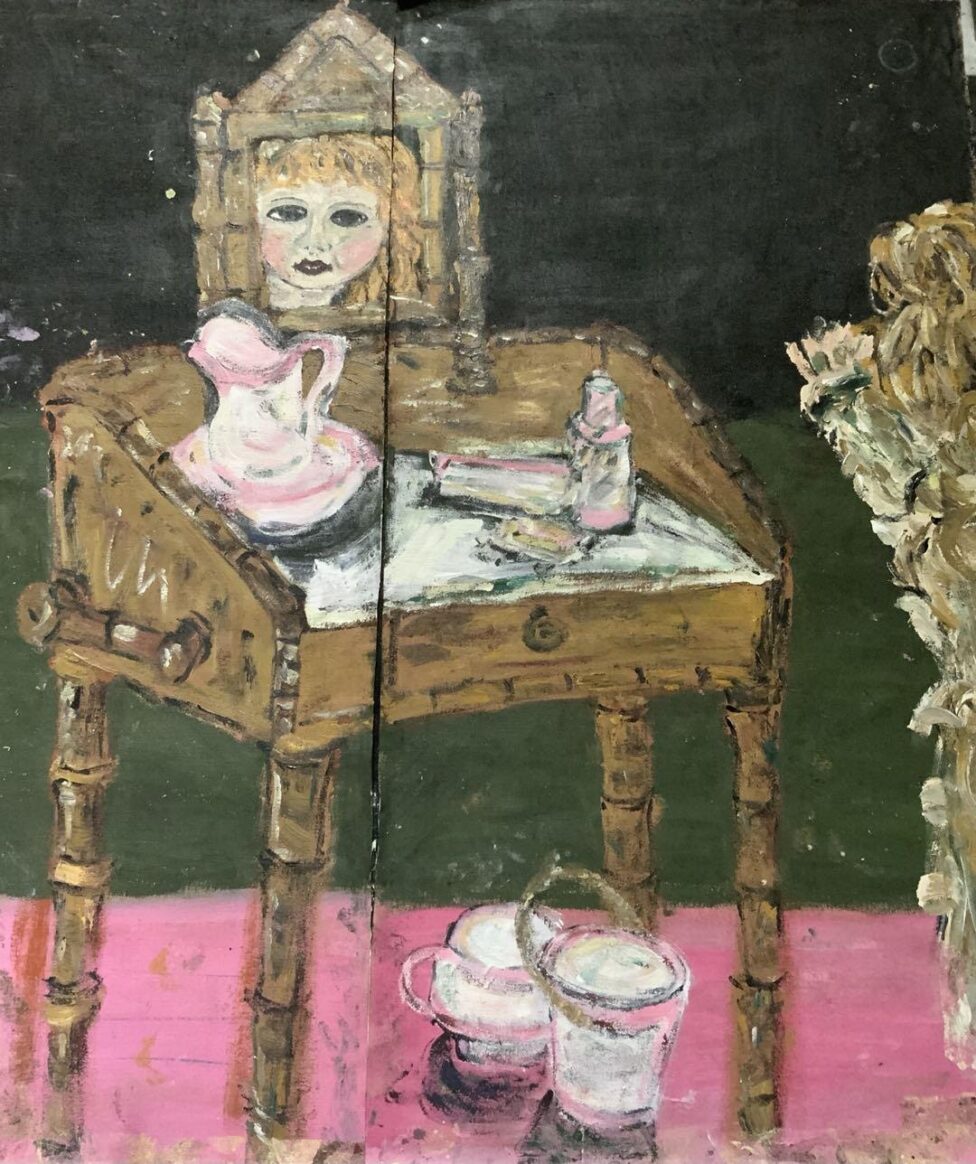 Despite their broken limbs and missing hair, the dolls are very much alive. If you read their body language, you’ll see that they are asking for help, watching you as they Look Back, Look Forward and finally, into the Mirror. It’s a far cry from the usual creepy doll designation and more of a teachable moment; “I hope that people can communicate, tolerate, respect each other, and build a better world together,” Lin says. 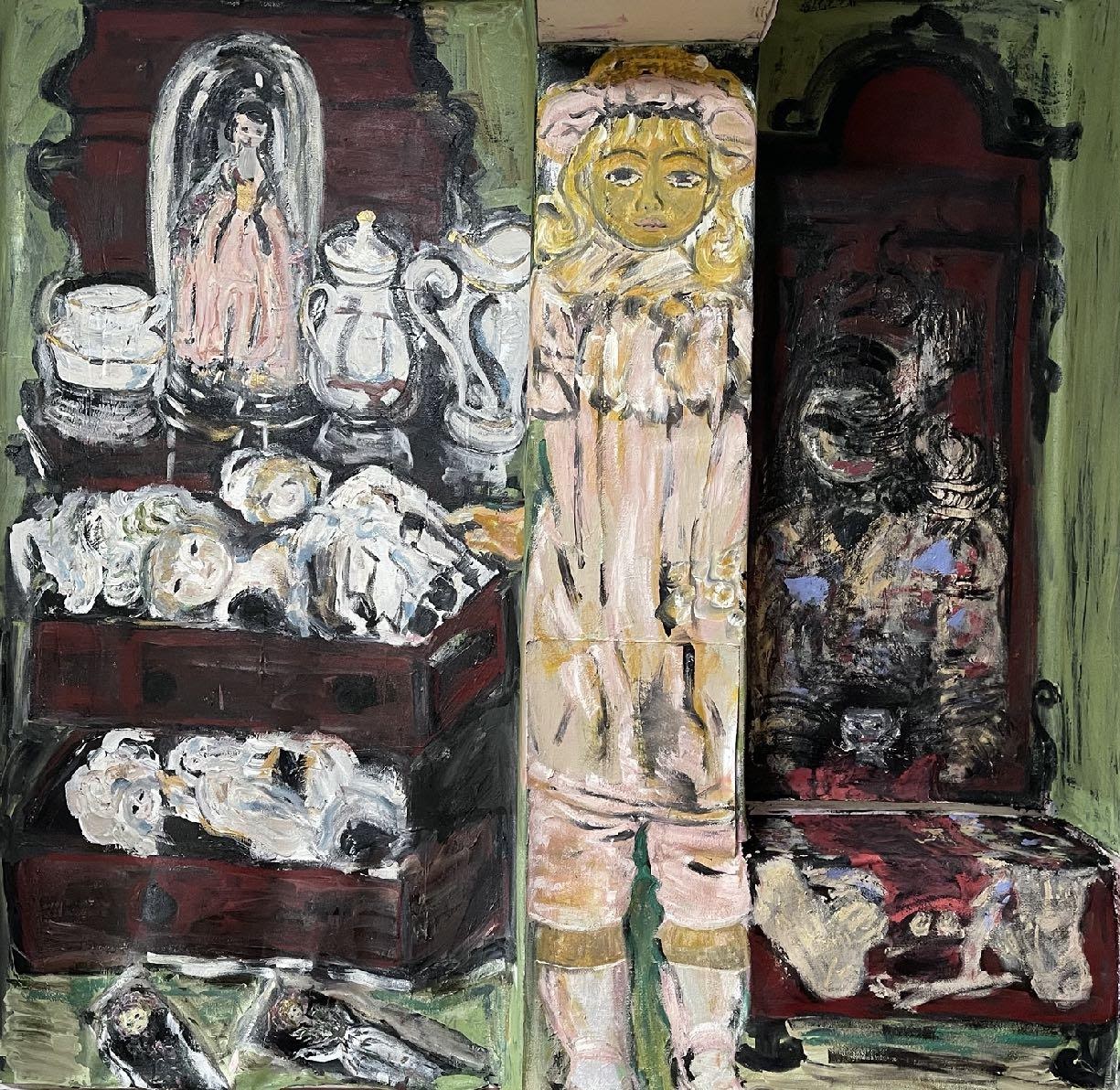 While the dolls assume a vulnerable position, they also assume a very powerful one. Just like Lin, they “carry cruel and painful memories, as well as the life force of youth, unbendingness, and endurance.” Childhood Nightmares is not some horror story; it’s about being brave enough to “face your problems in search of your true self.” And when you do, remember: I Could See You Shining.